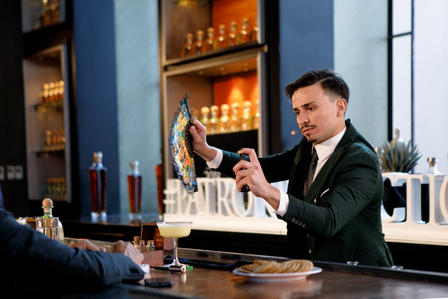 “Dr. Stravinsky is the best bar I’ve worked at in my life. At the moment, it’s a dream. I don’t like the word ‘expert’ but they’re experts in mixology, particularly fermentation,” says Yeray Monforte. “It’s an amazing opportunity to work here.”

Head bartender of the pioneering Barcelona bar, Monforte was recently crowned the global winner of Patron Perfectionists 2018, placing at the top of a field of almost 1,400 bar professionals from around the world. It’s an experience he describes as “the most beautiful moment in my professional career.”

Since opening in El Born in 2017, Dr. Stravinsky has established itself as a leading light of Barcelona’s flourishing bar scene, walking away with Best New European Bar at the Mixology Bar Awards 2018, Best Bar in Spain at Coaster Awards 2018 and 90th place in the World’s 50 Best Bars 2018, alongside only four other bars in Spain ranked in the top 100.

And Monforte is passionate not just about his bar but about his city. “At the moment, Barcelona is one of the capitals of mixology culture in Europe,” he says. “The future is incredible. I’m so excited for the possibility to continue working in Barcelona.”

A native of Castellón, a small city in Spain, where he co-owns the Lino Terrace bar, Monforte got his start as a barista. Bartending followed naturally when he discovered a passion for mixing coffee cocktails, and the move to the Catalonian capital came next.

Today, Monforte also works as a professor, teaching cocktails at Spain’s GASMA University, and is writing a cocktail book which he hopes to publish in 2020. His ardour for learning is evident. “I have about 150 books on mixology,” he notes.

Monforte’s bartending philosophy is surprisingly minimalist, given the theatrics on display at Dr. Stravinsky. “For me, more is less and complexity is simplicity,” he says. “The most important thing in mixology is to understand the classic cocktail and use good quality, natural ingredients.”

Patron Perfectionists 2018 gave Monforte the opportunity to share his values, alongside bartenders from 20 different countries, as far afield as Durban and Tokyo. After triumphing in the Spanish finals, he pushed hard to prepare for the global final. “The level in Spain was amazing in the competition, and the level in the global final was incredible,” he says. “The people and the cocktails and the presentation was crazy.”

Monforte’s winning cocktail reflects his thoughtful, academic approach to mixology. Besides drawing on Spanish signatures such as olive oil, citrus, and sherry, he uses bee pollen and honey as ingredients to highlight the ongoing environmental crisis Europe’s beekeepers face.

“For me, it’s very important to speak about your roots in a cocktail. In Spain, we have amazing ingredients… and there is also the bee,” he explains. “The bee is everything, without them, life will end - it’s the concept of embodiment.”

In the final, held at Patrón’s hacienda in Mexico, Monforte’s passion for his drink and his seriousness about the ingredients was key. “I believed in my cocktail, in my speech and my roots. It was very easy to speak about the concept,” says Monforte. “My feeling in the final was not if I won, but the most important thing was my presentation and feeling good in myself.”

The journey to Mexico was, in many ways, its own reward. “The experience was unbelievable. I will never forget this time in Mexico… to stay for six days there, and the opportunity to find the real culture of the Mexican people,” Monforte enthuses. “We met the people and saw their process - mixing the tequila and the process of distillation… To see the land of the agaves and the real experience, for me, wow, it was a dream!”

Monforte’s dedication to sharing his passion came through even as he was announced the global winner. “I won the competition, but the real experience is I have the possibility to share my style with a lot of people around the world. It’s an amazing opportunity for me,” he says.

The group behind Dr. Stravinsky support Monforte and so he’s looking forward to travelling with Patrón over the next year. “My career is very important for the company,” he says. “The possibility to move around the world and share our culture is good for Spain and Barcelona. If I go to another country and speak about Dr. Stravinsky, it’ll be good for everybody.”