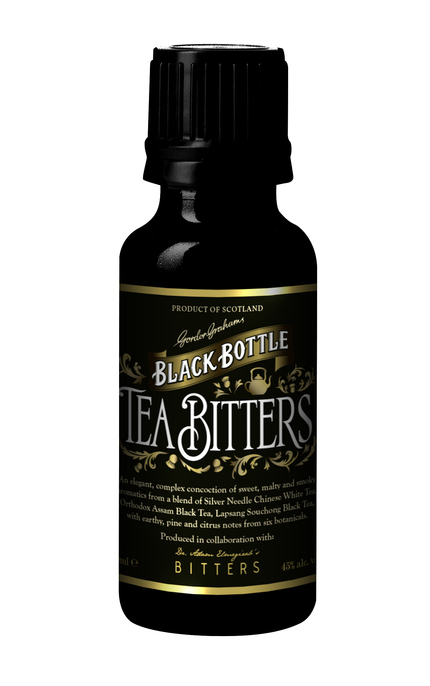 “The overall tea and botanical profile was selected to, obviously, represent the flavour and rounding mouthfeel you expect from teas; bitter, tannic, refreshing and subtly aromatic. With the bitters we turn this all up to eleven, but when introduced to a drink the subtlety is more tea-like.

The selected tea blend is a nod to the styles of tea that were imported by Gordon Graham in the 1800s. This is highlighted with the black tea I chose, which is manufactured by the orthodox style, as opposed to black tea produced by the CTC method (crush, tear, curl), a production method that didn't come into common practice until British companies adopted the CTC method in the early 1900s.

Orthodox teas are of a higher quality than CTC, with more layers of aroma and flavour, and don't tend to be as bitter. This was beneficial in the research and development stages as it allowed me to better control the level of bitterness the liquid offered. Identical samples using CTC black tea in place of Orthodox tea brought out too much astringency.

The introduction of the Silver Needle White Tea was a really interesting discovery after experimentation with a variety of teas. Brewed in the usual manner with hot water, you'll find white tea to be very, very subtle, however the maceration process with grain neutral spirit pulled out a bunch of really interesting flavour which pairs extremely well with whisky, namely: vanilla, honey, melon, citrus, and subtle crisp vegetal notes. The white tea also offered up the freshness you'll find upon tasting the bitters. The Lapsang Souchong, though introduced in small amounts, is there to lend further backbone to the black tea and bring the intense smoky, bitter finish, which again pairs extremely well with the bold fruity and spicy notes which I find dominant in Black Bottle whisky.

The remaining botanicals, burdock root (honey like sweetness, earthy, bittering agent), angelica root (earthy, aroma fixative), lemon (aroma, flavour), orange (aroma, flavour), juniper (pine, fresh) and vanilla (flavour), were selected to further back up the profile of the teas, to help create the desired flavour profile from the bitters (earthy, fresh, citrus, smoky), and because of their relevance in being used to flavour whiskies and whisky liqueurs through the centuries. They also make for a more complex character which allows the bitters to pair with other spirits and increasing their versatility."

Although designed to enhance cocktails made with Black Bottle Scotch whisky these versatile bitters are great used not only with other whiskies and dark spirts in general, but also worked well when we tested them in both gin and vodka based cocktails. Predominantly Lapsang Souchong in flavour, these bitters are a welcome addition to the enormous range of bitters available and are the first tea bitters we have come across.