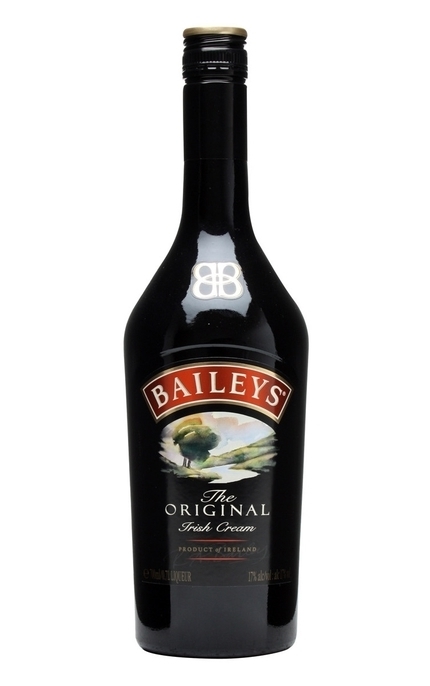 The world's bestselling liqueur, over 7 million 9-litre cases a year in 130 countries. Wherever in the world it is sold, Baileys is produced at a plant in Dublin which receives daily deliveries of fresh cream from 40,000 cows on 1,500 farms, jointly supplying 275 million litres of milk each year.
The story of Baileys (the registered trademark omits the apostrophe) begins in 1971 when the idea of blending Irish whiskey and Irish cream originated due to what was then Grand Metropolitan (now part of Diageo Plc) owning both the spirits firm W&A Gilbey & Co and Express Dairies.

The bottle has always proclaimed its producer as being the fictional R&A Bailey. In reality, it is owned and made by the British based spirits conglomerate Diageo. The rather quaint sounding R&A Bailey was the brainwave of one of the golf obsessed original brand development managers after reading an article about the Royal and Ancient Golf Club. The brand's surname comes from The Bailey Pub in Duke Street, Dublin where the brand team often met.

First launched in November 1974 Baileys is the world's original cream liqueur and it creation was only possible thanks to two men, Matt Gluckman and Matt McPherson, perfecting the technique of combining spirits and fresh cream without souring the cream. They borrowed a process from the ice-cream industry which removes and replaces the protein in the cream thus giving it a positive charge. When this is blended with the negatively charged alcohol the two combine harmoniously.

Bailey's is now the world's bestselling liqueur, selling over seven million nine-litre cases a year in some 130 countries. Wherever in the world Baileys is sold, it is produced in Ireland, at two plants in Dublin and Belfast which receive daily deliveries of fresh cream. Some 40,000 cows on 1,500 dairy farms jointly supply the more than 275 million litres of milk required each year, principally processed by Glanbia PLC's Virginia facility in County Cavan which has supplied cream to Baileys for over thirty years.

The makers of Baileys are very specific about the cream used in Baileys and insist it comes from happy Holstein-Friesian cows. Happy? They are kept happy due to being fed on four specific varieties of grass, after all, and to quote Baileys, "they don't call Ireland the Emerald Isle for nothing."

Cream makes up half of every bottle. Other ingredients include triple distilled pot-still Irish whiskey, neutral spirit, vanilla, cocoa and sugar. Baileys does not contain any artificial preservatives but due to the spirit acting as a natural preservative has a shelf life of two years once opened. That said I'd recommend stashing yours in a refrigerator as it is best served cold over ice.

When making cocktails, mixing Baileys with citrus and acidic ingredients (tonic, wine etc.) should be avoided as these will case the casein in the cream to coagulate. There is of course no truth in the urban legend that combining Baileys and tonic is lethal.
Baileys is best served neat over ice and is popular in layered shots such as a B52 and as a float in place of cream. It also mixes well with coffee and I particularly recommend serving in a Mocha Martini, the creamy version of an Espresso Martini.

Creamy latte coffee and milky chocolate with a hint of nutmeg spice.

Creamy and balanced with cocoa powder, dark chocolate, creamy latte coffee and a touch of nuttiness.