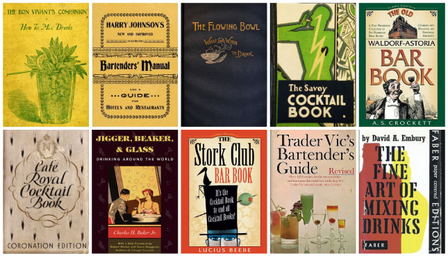 Since Richard Cook wrote the first known dedicated book in the English language recording drinks recipes in 1827 there has followed an awful lot of cocktail recipe books, many such titles having numerous editions. Navigating these tomes is essential to understanding the origin and development of the classic cocktails that appear on bar menus around the world to this day.

Fortunately, manly thanks to EUVS Vintage Cocktail Books, many of these works are now free to read on-line. Follows a timeline of some of the most important vintage cocktail books with links to read many of them online and even download.

1827 - Oxford Night Caps[online] by Richard Cook (Oxford, England)
The first known book on mixed drinks written in English, as the name suggests this was written by Richard cook, a resident at Oxford University, for students. A collection of drinks enjoyed at the university halls and residences in the early 1800s, it was originally published in 1827 as a pamphlet but grew into a book over three subsequent editions: 1835, 1847, 1871, 1931

1874 - American Bar-Tender or the Art and Mystery of Making Drinks[online] by E. A. Simmons (New York, USA)

1876 - The Bar-tender's Guide; How to Mix Drinks; or The Bon-vivant's Companion (2nd edition)[online] by Jerry Thomas (New York, USA).

1878 - American and Other Drinks by Leo Engel (England)

1885 - New Guide for the Hotel, Bar, Restaurant and Chef[online] by Bacchus & Cordon Bleu

1891 - The Flowing Bowl - What And When To Drink[online][repro edition] by 'The Only William' Schmidt (New York, USA)

1895 - The Mixicologist or How To Mix All Kinds Of Fancy Drinks ("revised edition")[online]by C. F. Lawlor (Cincinnati)

1895 - Modern American Drinks - How to Mix and Serve All Kinds of Cups and Drinks[online][repro edition] by George J. Kappeler

1896 - Fancy Drinks and Popular Beverages[online] by 'The Only William' Schmidt (New York, USA)

1900 - Harry Johnson's Bartenders' Manual or How To Mix Drinks or the Present Style (The New and Improved Illustrated" edition)[online][repro edition] by Harry Johnson (New York, USA)

1903 - Daly's Bartenders Encyclopedia[online] by Tim Daly, USA
Noted for Daly's reference to Martinis served frappe, the second known Marguerite Cocktail recipe, and his "Bottle of Martini Cocktail" recipe stating that "this is supposed to be a very dry cocktail" so the first suggestion of a "Dry Martini".

1904 - Drinks As They Are Mixed[online] "by leading bartenders" edited by Paul E Lowe (Chicago, USA)

1904 - American-Bar Recettes des Boissons Anglaises et Américaine[online] (American Bar Drinks and Recipes of the English American) by Frank P Newman (Paris, France)
Written by a bartender at the Ritz, this 1904 edition of a book, originally printed in 1900, is notable for its inclusion of the first-known recipe for a "Dry Martini Cocktail".

1905 - The Hoffman House Bartender's Guide - How to Open a Saloon and Make It Pay[online] by Charles S. Mahoney (New York, USA)

1906 - Louis' Mixed Drinks[online] By Louis Muckensturm (Boston, USA)
Noted for being the first book in the English language to use the name "Dry Martini" for a recipe combining gin and dry vermouth. The first known mention was in French - see 1904.

1906 - Modern American Drinks - How to Mix and Serve All Kinds of Cups and Drinks by George J Kappeler (New York, USA)

1909 - Recipes of American and Other Iced Drinks mainly by Charlie Paul (London, England)

1910 - The Hoffman House Bartender's Guide - How to Open a Saloon and Make It Pay by Charles S. Mahoney (New York, USA)

1914 - The World's Drinks and How To Mix Them Standard Authority (second edition) by Hon. Wm. (Cocktail) Boothby (San Francisco, USA)

16th January 1920 - U.S. Prohibition starts
America was the main driver in the evolution of cocktail so Prohibition (following the 18th Amendment 16th January 1919) obviously had a dramatic effect on bartending and the cocktail books published during the period.

May 1922 - Cocktails: How to Mix Them[vintage edition] by Robert Vermeire

1927 - Here's How! Revised Edition (content almost entirely different to above) by Judge Jr.

1928 - The Bon Vivants Companion or How To Mix Drinks[online] by Professor Jerry Thomas (who died in 1885) edited with an introduction by Herbert Asbury.

1930 - The Art of Drinking - What and How by Dexter Mason (published by Farrar & Rinehart Inc., New York City)

1933 - Hollywood Cocktails[online] (Buzza-Cardozo, Hollywood, California, USA). Published in November 1933, just prior to the end of U.S. Prohibition, page 1 has the telling phraise "Whenever it Becomes Legal to Serve"

1934 - What Shall We Drink[online] by Magnus Bredenbek
This has chapters on how to mix cocktails and the serving of red and white wine.

Oct 1934 - Here Is Something That Will Interest You (1st edition) [online] by The Victoria Wine Co., London.

Nov 1935 - Here Is Something That Will Interest You (reprint) [online] by The Victoria Wine Co., London.

1935 - Along The Wine Trail : an anthology of wines and spirits [online] by G. Selmer Fougner. Published by The Stratford Company, Boston, Massachusetts, USA.

Dec 1935 - So Red The Nose or Breath in the Afternoon[online] by Sterling North and Carl Kroch, USA

Dec 1937 - Here Is Something That Will Interest You (3rd edition) [online] by The Victoria Wine Co., London.

1939 - The Gentleman's Companion (Volume II) An Exotic Drinking Book or Around The World With Jigger, Beaker And Flask[online] by Charles H. Baker Jr. (New York, USA)

1939 - Just Cocktails (1st Edition) by W.C. Whitfield. Published by The Three Mountaineers Inc.., this book is distinguished by its wooden cover and leather lace binding.

1940 - The How and When (2nd Edition) by Hyman Gale & Gerald F. Marco.[vintage edition] This book is important due to the "Tropical Specialties" section introduced in this edition.

1946 - Trader Vic's Book of Food and Drink[vintage edition] by Victor Bergeron
Regarded as being the first Tiki book. 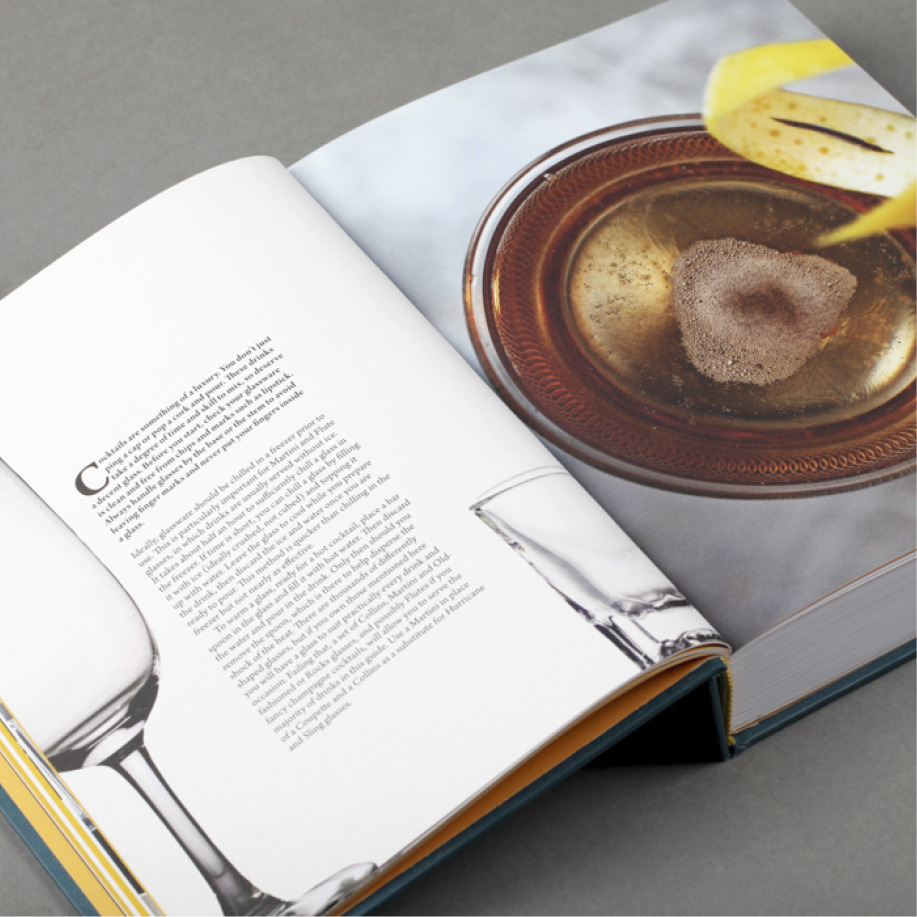 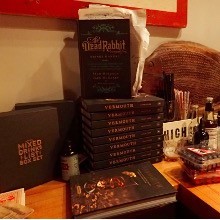 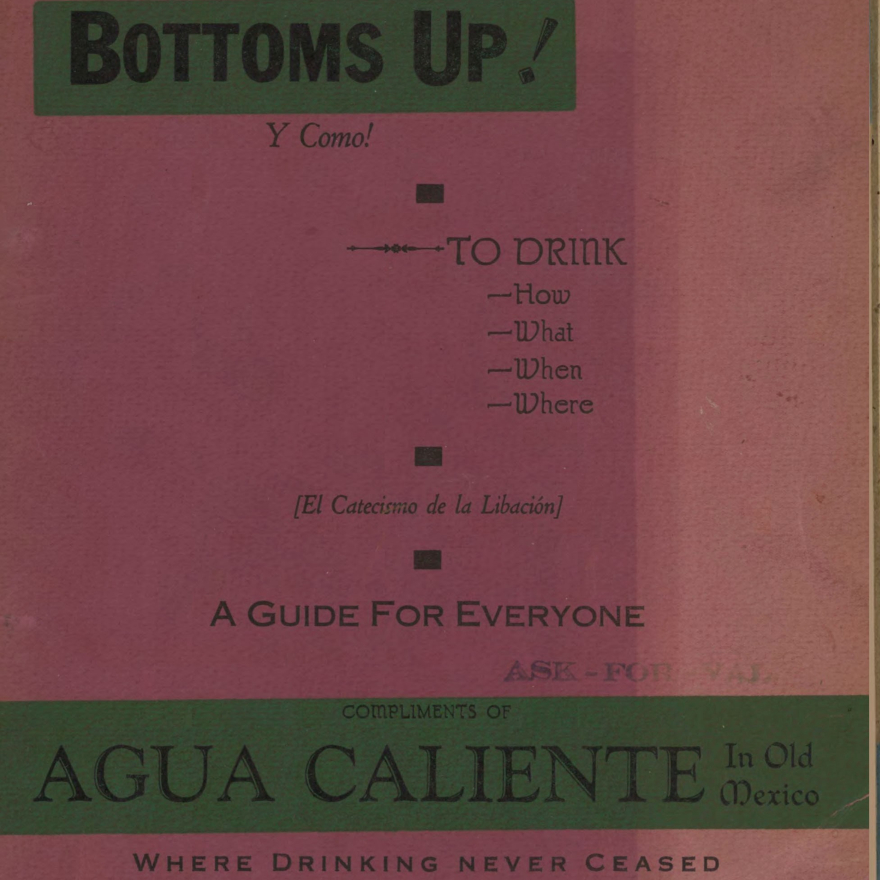