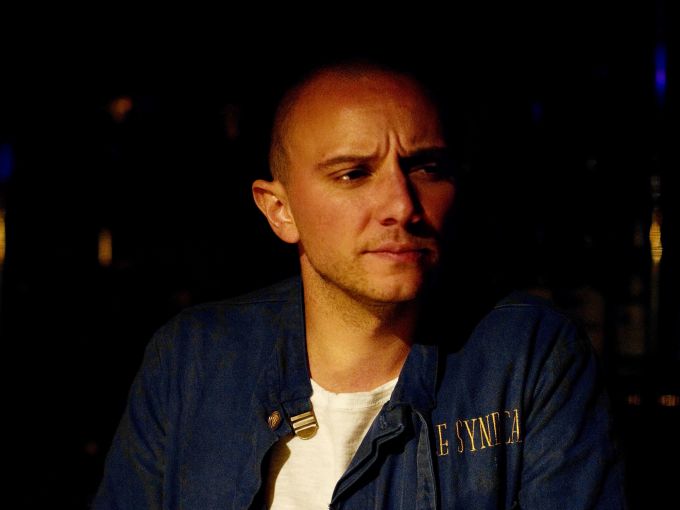 London-based bar owner Remy Savage talks us through how to distill your way to a shelf-stable lime juice, which not only tastes like lime from a citric blend but also preserves all the vibrant aromatics that elevate a drink. Here’s how.

The challenge bars have faced in global lockdowns is producing stable bottled cocktails. Fresh citrus is a staple of many great cocktails and it does not stay fresh after about 24 hours. Now London has once again been ordered back inside and bars are shut, Remy Savage, owner of London’s bar with shapes for a name, and co-director of Paris’s Le Syndicat and La Commune, wanted to make a bottled Tommy’s Margarita.

“I wanted to make a Tommy’s but a Tommy’s with an acid blend is just lame. It doesn’t have that smashability element to it. We still wanted to try it, but knew we were not happy with an acid blend, yet also knew with fresh citrus it would have no shelf life. How can we do both at the same time? How can we have aromas and taste at the same time with a shelf life?” he says.

It sounds obvious to say, but flavour and aroma are two separate elements to the flavour of an ingredient. Obviously, you might utter while rolling your eyes. However, you’d be surprised how much you’re smelling the lime in a Margarita as opposed to tasting it as you drink and it’s something acid blends in cocktails can’t make up for.

To backtrack, acid blends, for those who haven’t come across them, are used to replicate the flavour of citrus in drinks and for the most part do it very well. To create a lime flavour you can simply research the exact acid makeup of a lime and replicate it with surprising accuracy to the exact flavour of the fresh fruit. Citric acid tastes like lemon, malic acid added to this (which on its own tastes like a green-apple Warhead candy) starts to taste like lime. A dash of either ascorbic or succinic, some sugar and a tiny bit of salt rounds this out to the perfect lime replica. 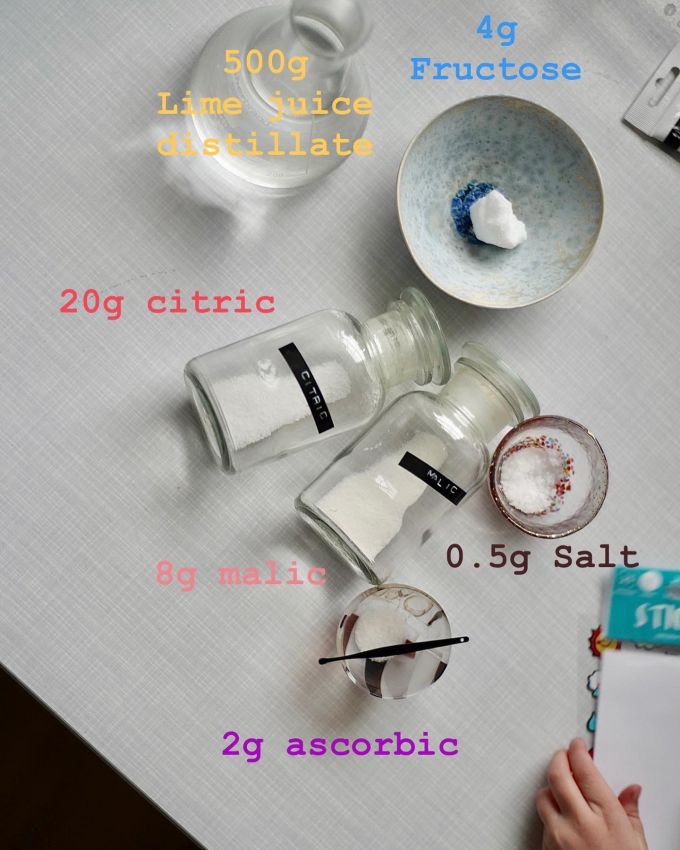 “We all use blends of acid that are water based and it’s great, it’s very functional and sustainable but it is effectively artificial and, secondly, it just has the taste. That is, it has everything you can measure by PH, brixs or alcoholic content – all of these things that make up taste and texture – but it doesn’t have any aroma of the lime. The idea was super simple, can I do the same process of reconstructing the taste through sugar, salt and acid, but do this on a canvas which is actually the aroma itself? says Remy.

The answer to the aroma problem was in Remy’s living room – a rotavap. Remy claims he uses it mostly to make tomato sauce for pasta which sounds incredibly indulgent but it’s not really that far from the truth. The rotavap definitely gets put to good use for his bars but he does clarify and distil tomatoes to capture the amazing aroma.

We know these nifty machines are great at separating out flavours. “Rotary evaporation can make distillates of fresh products that taste fresher and cleaner than you’d think possible. Properly used, rotavaps can recover nearly all the flavours of the original mixture. Unlike atmospheric stills, they can split flavours without changing them or losing them… they’re like a flavour scalpel,” writes Dave Arnold in his book Liquid Intelligence. 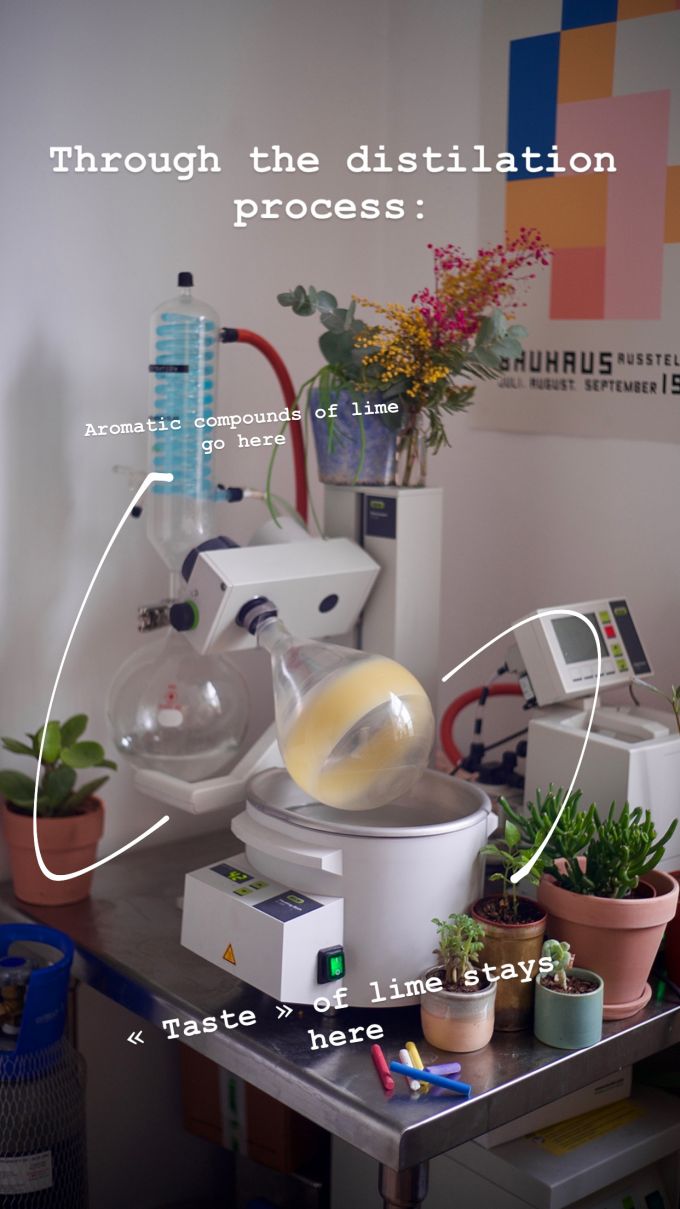 The canvas Remy is poetically talking about is the liquid that the acids are mixed in – which, like he says, is usually water. To have a lime-smelling liquid he distilled 600ml of fresh lime juice at 42 degrees Celsius and a pressure of 30 millibars.

In layman’s terms the lime juice is heated over a water bath of 42 degrees. Because rotavaps generate a vacuum you can distil at lower temperatures as the boiling point is lowered. This creates a very gentle distillation in a reduced-oxygen environment that prevents ingredients from oxidizing. The aromatic elements of the lime are turned into gas from the temperature, travel up through the condenser and are turned back into a clear liquid. Remy runs this distillation for an hour, until the condensed liquid won’t distil anymore, and at the end captures 500ml of lime juice distillate.

“Instead of having a cooked lime distillate, I am able to do this at a low enough temperature that the lime is not changed by the process. The molecule structure of anything exposed to heat changes, the acids tend to break down which is why cooked pineapple is sweeter than raw. There’s all kind of movements that can happen that change the ingredients and using the rotavap I’m able to keep the fresh lime smell I want,” Remy says. 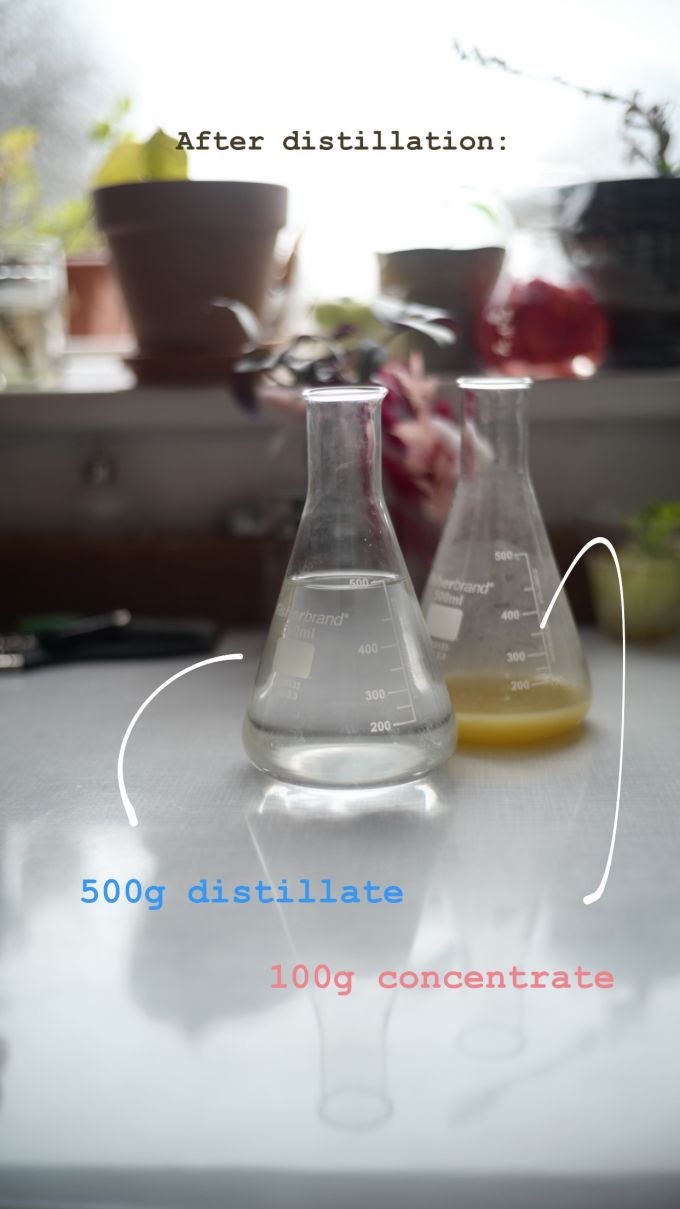 “I don’t want to say endless shelf life as so far I’ve only tested four months but it was still as fresh then as if I made it today. And really, the applications are endless. If you think of all the citrus juice that gets poured away at the end of the night in bars as well as the 40-60% of the global production of citrus that is wasted, it could potentially be distilled to capture the aromas and produce long-lasting alternatives,” he says.

“Ultimately right now I don’t have the infrastructure or plans to do something that large scale. For now, it is useful for us to make drinks, and not feel like we have to disappoint ourselves by using something that is not as nice simply because we are not allowed to be open.” 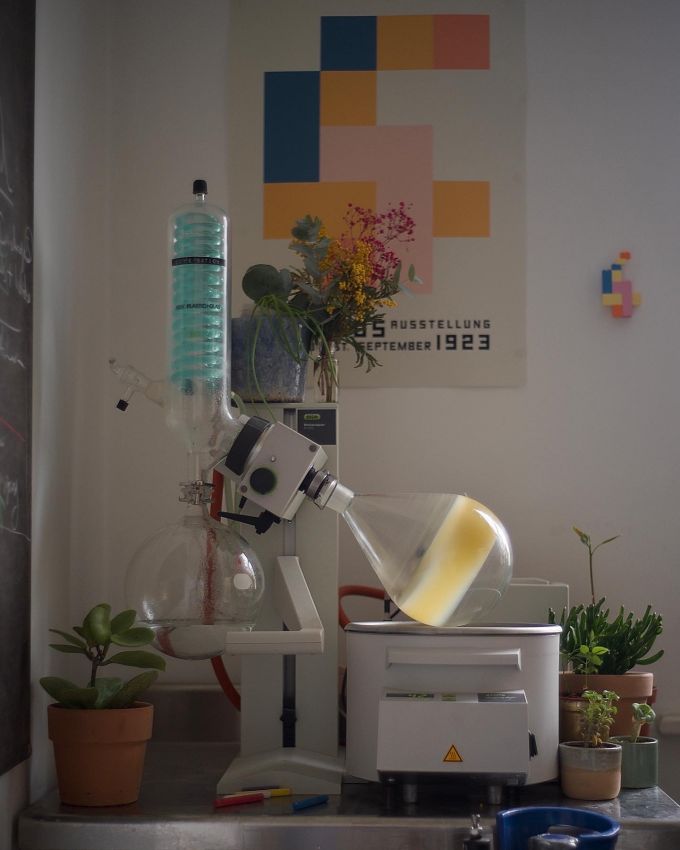 A quick flick through Dave Arnold’s Liquid Intelligence confirms Remy’s ‘infinity lime juice’ as he’s calling it. “A distillation of red habanero peppers smells like it will kill you with spice but isn’t spicy at all, because capsaicin, the chemical that causes the burn, does not distill. Cacao distillates taste like pure chocolate but lack the inherent bitterness of unsweetened chocolate because the bitter principles don’t distill,” writes Arnold.

The technique was also used by Ryan Chetiyawardana at the now-closed White Lyan bar in London which used no perishables such as citrus or ice. Instead the team there created shelf-stable cocktails that used acid blends and aromatic distillates to simulate citrus. Dave Arnold also conducted experiments with fresh lime juice but distilled onto gin in his quest for the perfect gin and tonic, finding the ethanol could hold onto lime’s volatile flavours. Years later he switched to a liquid nitrogen condenser as liquid nitrogen freezes all the volatiles on the condenser and captures them but, like Remy, Arnold had to add the acids and sugars back into this liquid.

"The most common question I got asked after sharing this was how did this “recomposed” juice differs from a water based solution infused with peel," says Remy. "To me a solution infused with fresh peel is already a step up from a traditional water based solution as facing the issue of lack of aroma in citrus blends still an issue remains lime peel and lime juice do not have the same aroma. I guess the difference between this recomposed juice and infused acid solution is the same as the difference between lime peel and lime juice."

It’s a fancy, expensive way of doing it. Remy adds that he has never been great with his savings and the rotavap was something he bought for himself. It seems to be worth the investment for this particular bar owner and for the locked-down nation of Britain, an aromatic Tommy’s is definitely in order. 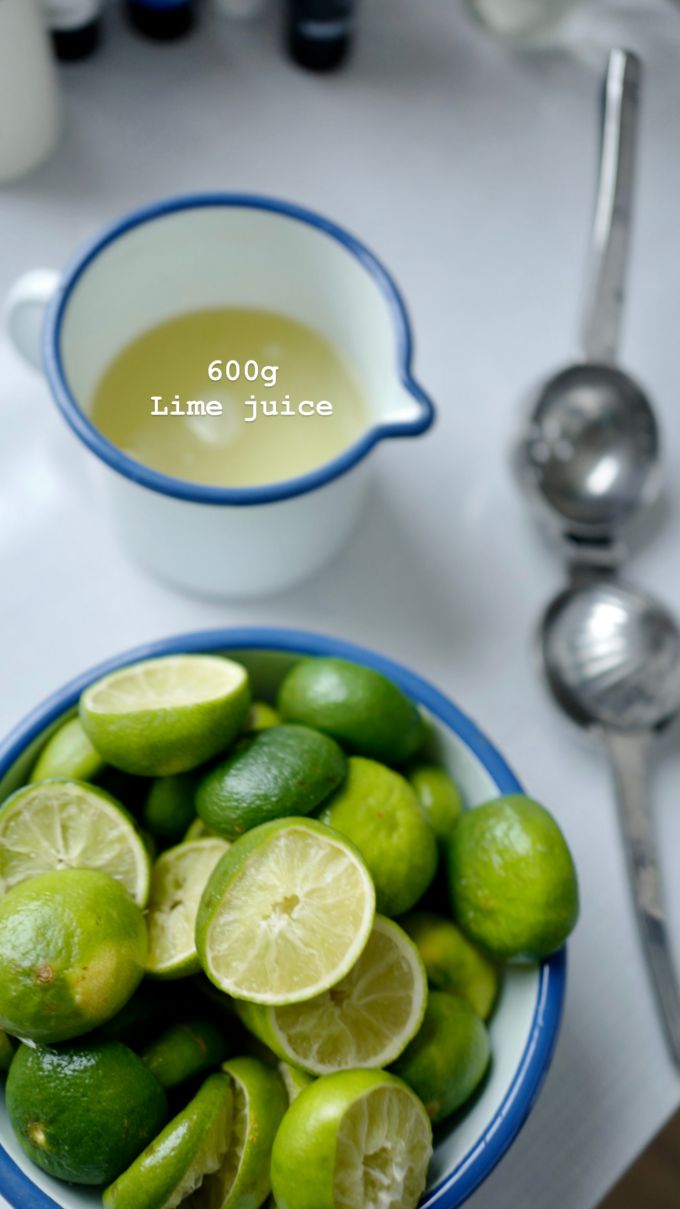