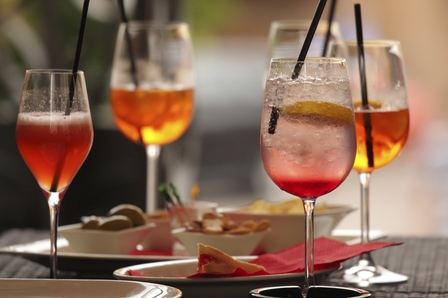 An apéritif, or aperitivo in Italian, is a light, dry or bittersweet drink intended to sharpen the appetite before a meal. Derived from the Latin verb aperire, meaning to open, such drinks open your palate and start you salivating in anticipation of food.

Examples of drinks enjoyed as apéritifs include vermouth (and other aromatised wines), amaro, dry wine or fortified wines (particularly sherry) and Italian red bitters. Many of these are flavoured with bitter herbs, roots and barks such as wormwood, cinchona calisaya and gentian which stimulate your saliva glands. Apéritif drinks such as amaro, vermouth and Italian red bitters form the backbone of numerous apéritif cocktails.

In Italy, aperitivi are early evening, pre-dinner drinks consumed with a reverence comparable to the English 4pm tea break and the Spanish sherry and tapas moment. So popular is the aperitivo in Italy that bars, particularly in Milan, operate what's known as an aperitivo hour. This is neither a 'happy hour' or indeed an hour at all - aperitivo hours usually run 6pm to 9pm, depending on the bar. Rather than discounted drinks, as in a happy hour, drinks are served with free accompanying snacks, everything from olives and potato chips to bruschetta and small squares of pizza and elaborate canapé-like snacks.

Contrary to the happy hour concept, a supplement is often charged to aperitivo drinks and in such establishments it's commonplace for a selection of snacks to be presented buffet-style. During the colder months hot snacks often form part of the aperitivo offering. In Italy an aperitivo must be accompanied by a snack or it is simply a drink and not an aperitivo.

The history of the apéritif dates back to at least the 5th century, when St. Diadochos of Photiki, the Greek theologian wrote, "People who wish to discipline the sexual organs should avoid drinking those artificial concoctions which are called 'aperitifs'- presumably because they open a way to the stomach for the vast meal which is to follow."

Drinking aperitifs before a meal became popular across Europe during 19th century, particularly in France, Spain and Italy, a fashion which saw the introduction of numerous bittersweet liqueurs designed to aid digestion.