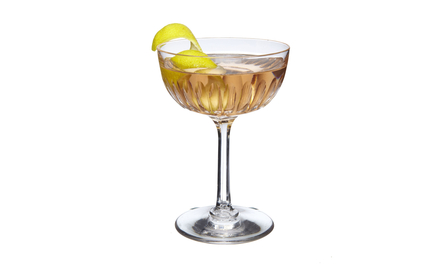 The Pink Gin cocktail is so named due to Angostura Aromatic Bitters giving the main ingredient, gin, a pink tinge. Originally gin at room temperature was simply poured into a glass that had been primed with a few dashes of the bitters and swirled to coat the inside. No ice was used. Ice simply wasn’t available.

My modern take on a Pink Gin not only calls for ice and a splash of water, but also a small spoon of sugar.

The creation of this cocktail is said to have started with the discovery of Angostura Bitters by Henry Workshop, an English ship's surgeon serving on H.M.S. Hercules. In 1826, his ship was patrolling the Caribbean on watch for slave trader vessels when he came across the bitters which had been created two years earlier by Johann Gottlieb Benjamin Siegert (1796-1870), a German doctor who had settled in Venezuela where he was Surgeon-General of a military hospital in the town of Angostura. Siegert had created the now famous bitters to treat stomach disorders and indigestion of his fellow settlers, not to make cocktails.

Now the city of Ciudad Bolivar, (renamed in 1846 in honour of Simon Bolivar) the town of Angostura sits on the mighty Orinoco River, connecting it with the Caribbean basin and it is via this river, and its trade, that Siegert's bitters found their way around the islands of the Caribbean with sailors being likely customers for any potion believed to treat upset stomachs and sea sickness.

The British Admiralty already prescribed the use of Chinchona Bark (quinia) to ward against tropical diseases and as a medical man Workshop was interested in Angostura as he had heard the preparation included Chinchona and many other herbal remedies. He procured a couple of bottles of the bitters while on shore leave in George Town, a port in the Cayman Islands. Back on-board ship, he and the ship's captain, Jack Bristow, mixed a small amount of the medicinal bitters with their gin ration and found the pink drink produced agreeable. They served their new creation to the other officers on the ship. Word spread and 'Pink Gin' as it became known, became popular with officers of the Royal Navy. By the mid-19th century the drink became widely served throughout England. 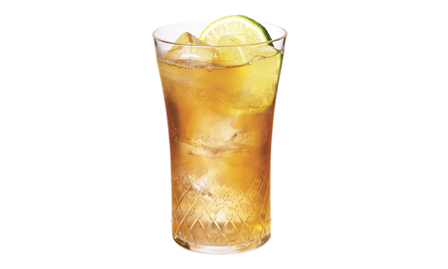 When I sampled my first Pink Gin, made with generous dashes of Angostura I found this classic tough to appreciate, so in 2002 I added another medicinal ingredient - tonic water, also containing quinine from cinchona bark. I featured this Pink Gin & Tonic in the second volume of my cocktail guide book with the comment "Basically a G&T with an extra pep of flavour from Angostura, this has a wider appeal than the Martini-like original Pink Gin." I'm sure I wasn't the first to add Angostura to a G&T but I've not found an earlier reference to a "Pink Gin & Tonic".

In his 1980 book Drinking with Dickens, Cedric Dickens, the great-grandson of Chares Dickens includes a recipe for a 'Burnt Pink Gin'. "Pour the gin into a wine glass and burn the Angostura in a teaspoon by heating over flame. When well burning let it fall into the gin. Add cold water to taste."