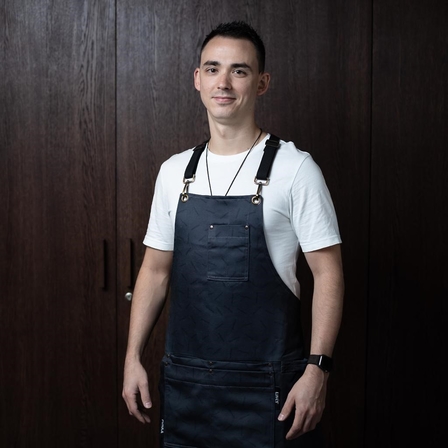 Greg Almeida, a leading light in the flat structure of Alex Kratena and Monica Berg’s Tayēr + Elementary, perhaps 2019’s most anticipated bar opening, decided to be a bartender before he really knew what a bartender did. “I come from Clermont-Ferrand, where Michelin was invented – and the Michelin Guide,” he says. “And in my mind if there were Michelin chefs there would be Michelin bartenders.”

The bug set in early, from the moment he first helped his uncle work events at weekends. “I remember pretty vividly I was in a park with some friends after football practice and we were having a few beers and we’d got a couple of different brands, and I had one and then the other and I just realised how different they were,” Almeida recalls. “I was like: ‘I don’t understand. It’s a beer. Why is it so different?’”

Against considerable resistance from his mother, who had hoped he’d be a lawyer and worried that the bar industry was awash in drunks and addicts, Almeida took a catering diploma followed by a bartending qualification. “In France, it’s a full year recognised by the government with the diploma at the end. You learn about classics, about spirits, about how to move behind the bar – very little about economics and that kind of stuff,” he says.

Although he worked in five-star hotels, it was Julien Escot’s Papa Doble in Montpellier that opened Almeida’s eyes to what contemporary cocktails could be. “My bartending school was there and on the first day of school our teacher told us that you should go and check this bar out because it’s really, really good,” he recalls. “I was just like, ‘Wow, this is it.’ I knew back then that this is exactly what I wanted to do.”

Almeida started his career in France, moved to Montreal, Canada, with his partner at the time, and ultimately landed in London at Novikov, the glitzy Mayfair affair owned by Moscow nightlife titan Arkadiy Novikov. He worked there happily for two years until disaster hit.

“We had one incident that made the council decide we had to go for plastic glassware, and in the months before that I had been working on a new menu,” Almeida says. “We had all this glassware in the pipeline – Russian dolls and all the things they have now – but we were told we couldn’t do it because of that incident.”

Frustrated, he started looking for alternatives. “A friend of mine who was working at the time at Pollen Street Social told me, ‘We just got a new bar manager. She’s awesome. She’s really talented and we’re looking for someone – do you want to come in and have a chat?’ And that was Monica Berg,” he says. A 10-minute chat turned into an hour’s conversation, but taking the job would have involved a significant pay cut, so it took Almeida time to make the leap.

When he did, it changed his game completely. “Monica really made me realise that this is a whole new world out there and there’s opportunities everywhere,” Almeida says. “Everything can be inspiration for creating cocktails or cool experiences. Even now that I’ve been working with her for so long, it’s still a constant learning.”

When Berg left the Jason Atherton group for fresh challenges, she recommended Almeida stay and, over the next couple of years, he built up his bar management skills, albeit working at a pace that brought him to – if not over - the edge of burnout. “I was working a LOT. We’re talking about five to six days a week from 9am till midnight every day and at some point that eats you up,” Almeida recalls. “I felt like I was not creative anymore, I wasn’t inspiring to my team anymore and it just did not feel right. I felt like I needed to stop for a little bit.”

Almeida planned to travel, which evolved into a stage (apprenticeship) at Oslo’s Himkok, recognised as the world’s most sustainable bar. “I’m really grateful I did it,” he says. “Not being in charge anymore and just being a bartender brought my creativity back.”

After opening the bar at a short-lived Jason Atherton venture, Almeida made his hospitable presence felt as head bartender at Scarfes Bar, in London’s five-star Rosewood Hotel, but it wasn’t long before Berg came calling. “Obviously I knew that she and Alex were looking for places to open and that there was a project, but I was very much doing my own thing,” he says. “But when Monica turned around and told me, ‘Look, that’s it. We have a site. We’re ready,’ I don’t think I even let her finish her sentence. I just said, ‘Yeah, I’m in.’”

While they waited for the bar to open, Berg and Kratena sent Almeida to work alongside Heidi Bjerkan and her team at Credo, a sustainable, Michelin-star restaurant in Trondheim, Norway. “Heidi is a champion of the farm-to-table movement, although she doesn’t see that as a movement, but just as the only way to do things,” he says. “They work essentially with two farms who provide the vegetables and meat that they need for their amazing 20-something dish tasting menu.”

Sustainability is an ethos the team bring to Tayēr + Elementary as well. Seasonal ingredients are the focus both at the simpler Elementary, where a single bartender can keep a crowd of up to 50 guests happy with (largely) pre-batched cocktails, and the more progressive Tayēr. Impressively, the bar receives most spirits in bulk, whether as 5-litre or 25-litre cans. “We can reduce wastage in terms of glassware, paper, plastic and all this stuff – but we can also upgrade great products, things that we blind tasted and we believe is delicious at a great price,” Almeida says.

As well as reinventing the approach to spirits brands, the team have rethought the traditional hierarchy of the bar. “We follow the principles of holacracy, a flat organisation style of management which defines roles rather than jobs,” Almeida says. “We are all bartenders, responsible and accountable for all actions and decisions to follow our mission, which is to innovate and challenge the status quo in the hospitality industry.”

Yet, while breaking down boundaries doesn’t come easily, Almeida is relaxed in his role. “There is definitely a lot of pressure because it is Alex Kratena and Monica Berg. It’s their opening and something that people have been waiting for a long time,” Almeida says. “But at the end of the day, as much as the bar industry likes to think it’s big, it’s pretty small, and we’re very much working for our regulars.”