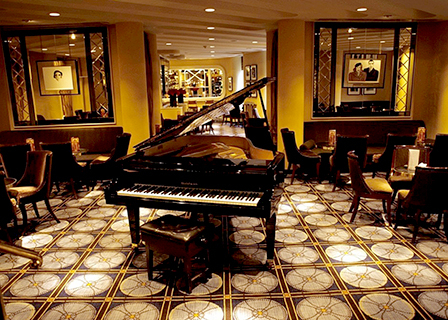 1889. A world in the midst of economic boom, and in the centre of this age of revolution, of exploration and colonialism, of intense wealth side by side with the workhouse, was London; a city that could claim to be the heart of a global empire.

On August 6th that year an institution would be born, as The Savoy flung open its doors for the very first time. 2014 marks a grand celebration of 125 years for a hotel that has been an icon for London and its standard of hospitality. More than this, it harbours a lifetime of moments and memories, from its guests to its staff.

To celebrate this anniversary the hotel's famed and renowned American Bar has launched a new cocktail menu, drawing its inspiration from the 125th anniversary. The drinks are designed to reflect moods and iconic moments since 1889. Each of the five sections is a 25 year period of time running chronologically until today, with each one representing a style of drink deemed to reflect that era. 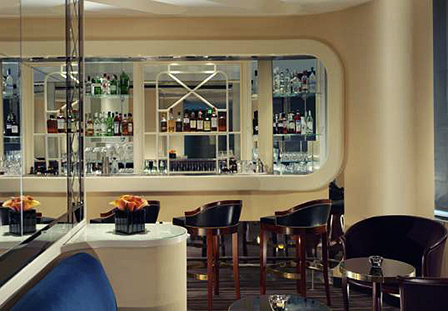 "Tackling the challenge of The American Bar cocktail menu should not be understated. As a team we are all acutely aware that our actions fall on top of menus created by the likes of Harry Craddock and more recently Peter Dorelli, thus there is a responsibility to how we act. As it was our 125th anniversary we wanted to do something that would be fitting and one day the light bulb lit. We had been weighing up options for a few weeks and then the whatsapp message from Erik Lorincz came through on my phone with the simple message I have an idea," said Declan McGurk.

"Then the next day as I walked into work Erik just had a big smile. As it is our 125th anniversary he wanted to do a chronological menu with storytelling being a huge theme. All our team get trained on telling Savoy stories thus we wanted the menu to reflect this. When doing the research it would have been very easy to forget the guest and make this too bartender orientated or even, dare I say it, too Savoy orientated, so the events and icons are a blend of all sorts from Winston Churchill, a former guest, forming the Other Club which is still in existence today, to the building of the Eiffel Tower which ironically coincided with the opening of our hotel. The result is a menu that is all about the guest and their enjoyment and in this essence I believe it is a unique approach to a menu."

Below is a selection of cocktails from the new menu.

On 6th August 1889 the Savoy opened its doors very much as a side business to The Savoy Theatre. Very quickly however, The Savoy sprang from the shadow of its theatre and set global hospitality standards the world now takes for granted. The American bar itself gained its name as early as 1893 and was moved to its current location in 1904.

"Named after the Eiffel Tower, erected in 1889 which was the same year as the grand opening of The Savoy. The tallest structure in Paris and an icon of global culture and architecture was so named after its designer Gustave Eiffel. This Gaelic-influenced sour brings together the lesser-known ingredients of apple brandy from Normandy and the equally obscure 'Rhum' from the former French colony of Martinique to create a unique and aromatic sour for the 21st century."

"A dry and complex scotch sour based on old and traditional drink-making methods and trends, the Scotchlaw is a reference to the 'Raine's Law' that was enacted at the end of the 19th century in America - an act which sowed the seeds of prohibition - at the same time that the very first blended scotch started making its way into the US market." 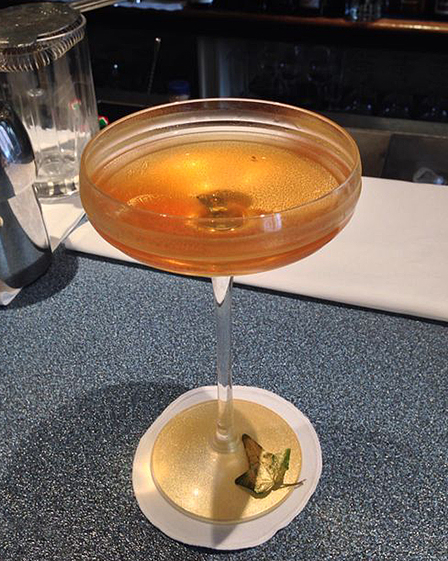 "A hearty and spirited concoction was created in commemoration of when the courtyard of The Savoy became flooded at the request of a guest for a Gondola party in 1905, replicating the waterways of Venice. This cocktail is a classic bittersweet drink which sees the recreation of a lost Savoy ingredient named Hercules often described akin to an aperitif wine."

This era saw great change for the American Bar with Ada Coleman handing over the reins of the role of Head Bartender to none other than Harry Craddock. Harry famously had to leave his role as a bartender in the US due to prohibition and with him he brought much experience and a never seen before portfolio of recipes. He finally managed to write all these recipes down with the publication of the Savoy cocktail book, a must stock for many households.

"A cocktail full of character created by our head bartender Erik Lorincz and named after the prominent 'Happy Birthday to You' song written by Claydon Sunny in 1924. This drink shows off the complex side of scotch in an interesting marriage with champagne and other fruit-driven liquids." 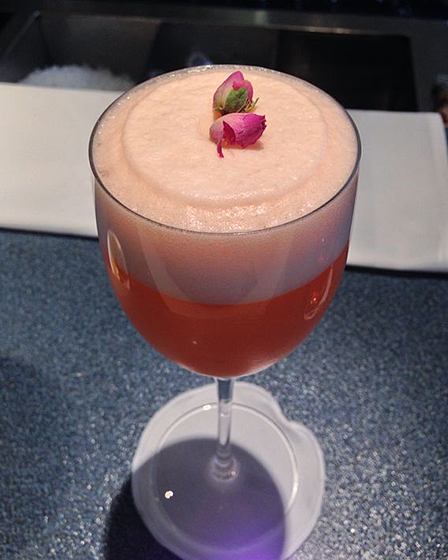 On 17th January 1920 the Eighteenth Amendment came into action preventing the sale and consumption of alcohol in the United States of America. This act had a huge impact on the world of drinks, and in particular the American Bar. When choosing the base spirit for this cocktail we opted for Ilegal Mezcal which owes its origins to a history of bootlegging and border crossing, very much like the effect prohibition caused."

"When it came to drink creation, I delegated this to the team members giving them a topic to research and they then had to make a drink to reflect this so they had to very much approach it as they would a cocktail competition. The menu launched on Monday 4th August and I have never been as excited about a menu. There is so much beauty and intrigue to it and the fantastic aspect of this menu it is really is the guest who can get totally involved in its parameters," said Declan.

This era for the evolving Savoy was certainly a character defining period as global travel increased and London became once more the playground for the rich and famous after the hardship of World War II. This section pays tribute to a cultural change that occurred in London during this period, which was driven by some great characters, who became synonymous for this era.

"Named after the venerable and exclusive 'The Other Club' that was formed by then Liberal Home Secretary Winston Churchill and Conservative MP The Right Honorable Fredrick Edwin Smith. Originating in 1911 and succeeding 'The Club' from the 18th century, this luxurious concoction reflects the richness of the famous British political dining society that would dine fortnightly in the Pinafore room of our beloved Savoy every two weeks when parliament was in session." 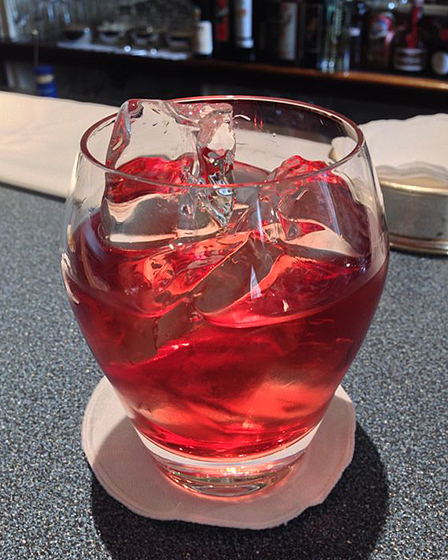 "2nd June 1953 saw Elizabeth II crowned queen at the tender age of 25, over a year after the death of her father King George VI.
The tradition of such a festival being executed was delayed as it was deemed inappropriate for a coronation to take place during a mourning period that followed the death of the preceding sovereign. However, it took nothing off one of the most iconic events of the 20th century, and to commemorate this we present to you an elegant and rich gin libation with true British identity."

"Created as a dedication to Frank Sinatra and also our eldest living head bartender Joe Gilmore. Frank Sinatra was a frequent guest of the American Bar, usually sipping Martinis and was only ever served by Joe. He would always order with the phrase 'set'em up Joe' and after performing this song on the piano legend formed the actual song was about Joe Gilmore. The cocktail itself takes inspiration from the preparation of a Ramos Gin Fizz and is a long full bodied gin drink."

This era for The Savoy can be defined as a period where the inspiration for the modern day bartender formed. This period saw the emergence of former Head Bartender Peter Dorelli, who is now a global bar icon and enjoying his 51st year of working in the hospitality industry. Peter retired from his position at The Savoy in 2003 and now concentrates his energy on passing on many stories and experiences gained from his time at The Savoy.

"Cuba's rise to dominance as a culturally defining country not only stems from the limelight they received throughout the 1960s, but also as a world famous destination for some of the most well-known cocktails to ever grace cocktail culture. The Maid in Cuba is the creation of our bartender Tom Walker. Tom took inspiration from a new drink category 'The Maid' originating in NYC which has similarities to both the Daiquiri and Mojito. In 2014, this drink was awarded the title of Global Bacardi Legacy Cocktail Competition Winner and is most definitely a contemporary classic in the making."

"Even though The Savoy has been known to entertain royalty, admiralty and politicians throughout its history, it has also played host to both music and film stars too, including the one and only Mick Jagger. In honor of the legendary rock star's stay in the hotel, we've created this fruity and fresh bitter-sweet styled drink that is anything but a rolling stone."

"Created to commemorate the legendary head bartender that served behind the American Bar for 25 years before passing his position onto Salim Khouri. This drink was created to celebrate Peter Dorelli's 50 years of service in the hospitality industry. Using the king of brandies as a backbone to the drink, this drink is paired with the limited edition Martini Gran Lusso to create something magical and warming, just as its namesake, and is garnished with a gold leaf."

Bringing the menu to modern day, the focus of this section is celebration. During this recent era The Savoy has celebrated many events from the reopening of its doors to the Diamond Jubilee and more recently the birth of a future King. With this in mind these drinks reflect classic celebration via Champagne cocktails and some culturally styled celebration drinks.

"Given the set-up of this menu it does mean for the first time probably since the 1930s there isn't what people call classic cocktails on there, but our aim here isn't to forget historical creations but instead really get involved in historical moments and memories and extract emotions that can translate into cocktails using classics as inspirations for the recipes," said Declan. 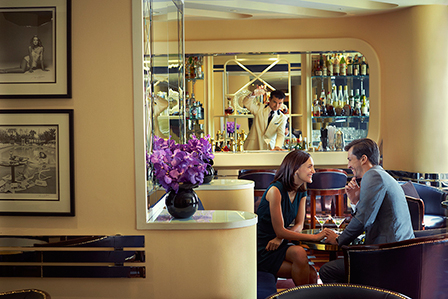 "Having opened its doors on 6th of August, this Grand Hotel in London proudly stands at 125 years old. As it is tradition at The Savoy, this anniversary was marked by the creation of a cocktail from the American Bar. The 125 cocktail represents the American Bar's long-standing history in The Savoy that will continue to create drinks to celebrate with for many years to come."

"On 10.10.10 the long wait was finally complete, and The Savoy reopened its doors, restored to its pride of place in London. This drink was the opening creation of the American Bar in 2010."