Fruit flies plague bars and kitchens. They find their way into bottles - especially wine and vermouth bottles, and swarm over cut fruit and beer taps. However, a good regime of cleaning, covering and setting traps should eradicate them.

Odour detectors in these tiny creatures are brilliantly evolved to detect fermenting fruit from far away and because they are so tiny they can get in through tiny crevices around windows or doors. And as the female fruit fly can lay up to 500 eggs you only need one to start a plague. Their other port of entry is on the fruits and vegetables that you bring home already laden with eggs, which then hatch incredibly quickly, going from egg to adult in just eight days

The smallest puddle or even damp mops and sponges provide the perfect place for fruit flies to lay their eggs as this environment will provide food for the larvae which feed on any decaying matter.

How to eradicate flies

• Prepare fruit fly traps (see video) and position them near fruit, bins and beer fonts.
• Meticulously clean when breaking down a bar at the end of each shift and in domestic situations, clean your kitchen immediately after each meal rather than after watching countless episodes on Netflicks.
• Cover cut fruit with cling film or keep in the refrigerator. Never leave out overnight.
• Keep beer drip trays emptied and cleaned and at home rinse empty beer bottles and cans before placing in your recycling bin.
• Don't leave standing water overnight and ideally pour a small splash of bleach into sink drain holes every night. (Water held in the U-bend of the drain is luxury accommodation for fruit flies.)
• Don't leave out wet rags, sponges or mop heads. Store in sealed containers or wrap in clingfilm.
• Seal bottles at end of each shift (and ideally during shifts for all bottles not in the rail).
• Cleanliness and cling film are the best weapons against fruit flies.

There are two families of fly that are commonly referred to as fruit flies. The first, Tephritidae is a family of large, colourfully marked flies including agricultural pests. Then there are Drosophilidae, a family of smaller flies comprising more than 4,000 species, amongst which is Drosophila melanogaster or the common fruit fly. Drosophila melanogasterar are generally considered to be a nuisance rather than a pest, a pest being broadly defined as a plant or animal detrimental to humans or human concerns.

Adult Drosophila melanogasterare are 3 to 4 mm long and have red eyes, a tan thorax and the abdomen is black on top and grey underneath. Fruit flies can appear to be brown or tan in colour. 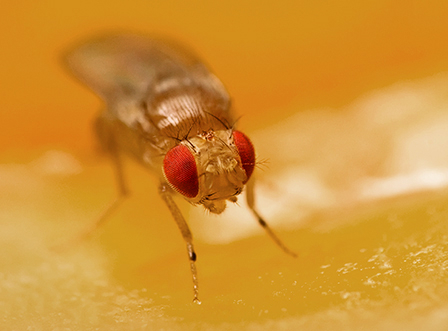 Like other fly species, fruit flies have a four-stage life cycle: egg, larvae, pupa and fully formed adult. The early stages last just a few days and in ideal temperature conditions, fruit flies can complete their development in as little as a week. The entire life cycle is about 25 days or so depending on environmental conditions.

The female fly probes numerous sites before deciding where to lay her eggs. Her location of choice will be on the skin of very ripe or fermenting fruit but she will also lay in moist areas such as the slime layer inside slow-draining plumbing, or on a damp mop or sponge. Just twenty-four hours later the eggs hatch into small, white larvae that eat from their nesting site for four days. Fruit fly larvae undergo moulting stages during which they shed the head, mouth, cuticle, spiracles and hooks. The mature larvae then crawl away from the feeding material to a nearby dry spot for the next developmental stage.

The larval skin now darkens and develops into a hard case called a puparium. During this pupa stage, which takes approximately four days, the legless larvae grow six legs and a pair of wings. Twenty-four hours before the adult fruit fly emerges from the puparium, the red eyes and folded wings are visible through the surface which then turns black. After forcing their way through the puparium, adults are light in colour and have elongated wings and abdomens. Within a few hours, these new adult fruit flies will darken.

Drosophila melanogaster is an important model organism (a model organism is a species that is studied to understand the biology of other organisms, often humans) and is used extensively for studies concerning genetics, development, physiology, ecology and behaviour. The rapid lifecycle allows researchers to study the effects of an experiment over a number of generations and to follow mutations. Fruit flies share 75% of the genes that cause diseases in humans and researchers have manipulated genes in the fruit fly to extend their lifespan so perhaps one day research on them will be of real benefit to all of us. Fruit flies have only four pairs of chromosomes (humans have 23).

... comment(s) for How to eradicate fruit flies