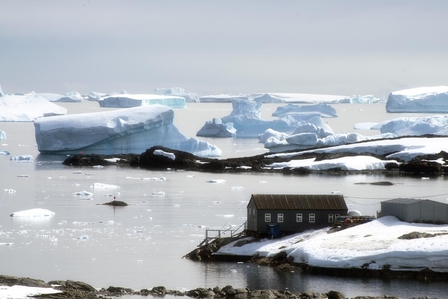 Fancy something a little more outré than your common-or-garden speakeasy? Check out these bizarre bars from around the world.

Cave Bar, Petra, Jordan
We're not sure that Indiana Jones - who galloped up Petra's Canyon to its Treasury in pursuit of the Holy Grail - would have approved. But one of the 2,000-year-old rock cut tombs in this mysterious and ancient city has been transformed into a bar. So, in a double whammy of weird, Cave Bar isn't just a cave bar, but a grave bar.

Big Baobab, Limpopo, South Africa
Treehouse hotels are SO last year. Still, at least as far as we know, the Big Baobab is the only bar in the world that's not just up a tree but IN a tree - and a living one, too. The eponymous baobab is 47 metres around and as much as 6,000 years old: its marketing-savvy owners carved out a pub, complete with wine cellar, in the double-trunk.
bigbaobab.co.za

Das Klo, Berlin, Germany
Whatever you think about the German sense of humour, Das Klo (The Loo) long predates Chinese upstarts like Modern Toilet. Sup beer from bedpan bottles, sit on toilets (complete with fake turds when you lift the lid), use loo roll as napkins, and enjoy bizarro Halloween monsters from spiders downwards alongside Teutonic wit and pranks.
www.klo.de

Vernadsky Research Base, Antarctica
It was, of course, but of course, the British who had the idea of diverting wood from pier-building into creating Antarctica's only English pub. But, since 1996, the former Faraday Bar, like the rest of the research base, has been Ukrainian. The chaps distill vodka and serve it to visitors in exchange for $3 or an item of women's underwear per glass.

Snake House, Sihanoukville, Cambodia
What do you get when a Russian vet comes to Cambodia and sets up a bar? Pure insanity. Like this venue, a tribute to the owner's love of reptiles: there's a crocodile farm, live snakes in the walls and the table tops, and "dancers" who, as far as we know, don't work with the snakes. The same dude owns a beach club with a plane in it.
snake-house.com

Kryjivka, Lviv, Ukraine
While half Ukraine is involved in bloody conflict, Lviv, up near the Polish border, remains entirely at peace. At least until you get to Kryjivka, a patriotic theme bar that's packed to the gunnels with grenades and machine guns, so you can follow your round of vodka shots with a round of BB gunshots. As they say on the door, "Glory to Ukraine!"
fest.lviv.ua 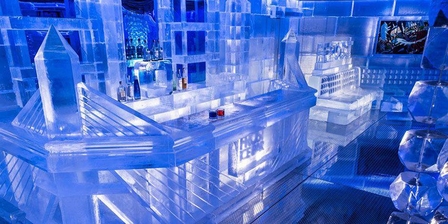 The Ice Bar, Pont-Rouge, Canada
Yes, we know the Swedes did it first - but the Ice Bar in Pont-Rouge's Hotel de Glace, an ice hotel built each year from scratch, is just a few minutes from downtown Quebec. Forget urban ice bars: there's nothing like crunching over fresh snow through freezing air to an environment built entirely of ice to put the magic into a frozen shot from an ice glass.
hoteldeglace-canada.com

Hobbit House, Manila, Philippines
We've covered http://www.diffordsguide.com/encyclopedia/2014-04-07/372/bars/the-most-bizarre-bar-hobbit-house-manila before, but we still feel that a Hobbit-themed bar staffed largely by little people deserves an entry in the annals of world's weirdest bars - even in midget-obsessed Manila. Particularly given that, unlike most bizarre bars, Hobbit House has a genuinely good drinks offer in its range of imported beers.
hobbithousemanila.com

D-Boat, St John's, Antigua and Barbuda
China may have a theme park on an aircraft carrier, but never let it be said that the West Indies lie behind China in their pursuit of the bizarre. D-Boat is a 1970s oil tanker that's been converted into a floating water park, bar and restaurant. Because cocktails are the perfect precursor to a bounce on a floating trampoline, and an oil tanker is totally a yacht.
dboatantigua.com