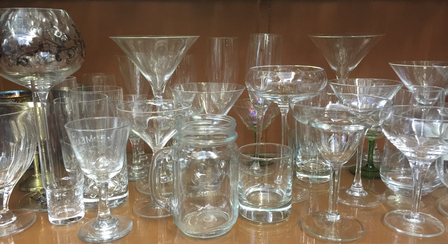 Cocktails are something of a luxury. You don't just ping a cap and pour – they take a degree of time and skill to mix, so deserve a decent and appropriate glass.

Before you start, check your glassware is clean and free from chips, watermarks and lipstick. Always handle glasses by the base or the stem to avoid leaving finger marks and never put your fingers inside a glass.

Ideally, glassware should be chilled in a freezer prior to use. This is particularly important for Martini, Coupe, Nick & Nora and Flute glasses in which drinks are usually served 'up', without ice. Allow 20 to 30 minutes to sufficiently chill a glass in the freezer. If you don't have a freezer to hand then you can chill glasses by filling them with ice (ideally crushed, not cubed) and topping up with water. Leave the glass to cool while you prepare the drink, then discard the ice and water once you are ready to pour. This method is quicker than chilling in the freezer but not nearly as effective.

Conversely, to warm a glass ready for a hot cocktail, place a bar spoon in the glass and fill it with hot water. Then discard the water and pour in the drink. Only then should you remove the spoon, which is there to help disperse the shock of the heat.

There are thousands of differently shaped glasses, but if you own those mentioned here you will have a glass to suit practically every drink and occasion. Failing that, a set of Collins, Coupe and Old-fashioned or Rocks glasses, and possibly Flutes if you fancy champagne cocktails, will allow you to serve the majority of drinks on this website. 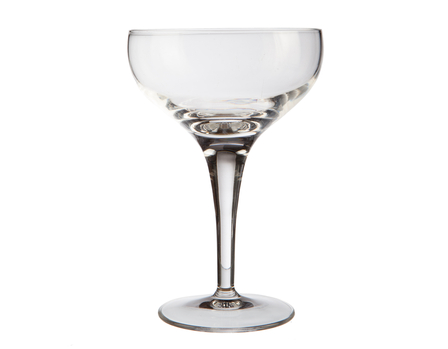 Known in cocktail circles as a Coupe, Champagne Saucers are perfect for serving straight-up drinks. Urban myth has it that the original Coupe glass was moulded in the shape of Marie Antoinette's left breast. Sadly, the truth is the glass was invented in England in 1663, long before the reign of the queen. Although I am the proud owner of a pair of Coupes shaped after British model Kate Moss' left breast - but that's another story... .Modern Coupes are widely available but search out vintage examples. Store in a freezer to ensure well chilled prior to use.
Capacity to brim: 7oz / 20cl
Urban Bar Retro Coupe 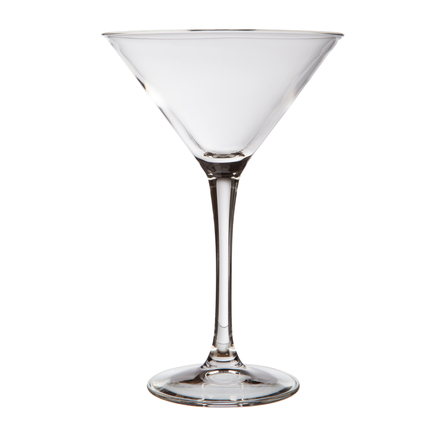 The curvy Coupe has made the angular v-shaped lines of the classic Martini glass look a tad dated but somehow a Martini is not a Martini when served in a rounded glass. A Martini glass should be no bigger than 7oz / 20cl, as a true Martini warms up too much in the time it takes to drink a larger one. Keep Martini glasses in a freezer so they are well chilled before use.
Capacity to brim: 7oz / 20cl
Urban Bar Verdot Martini glass 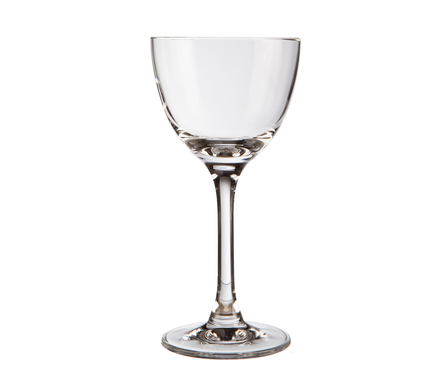 These dainty stemmed elongated glasses date from the 1930s, tend to be smaller than the more commonplace curvy breast-shaped Coupe and can be a third of the size of a 1980s Martini lunch-style angular Martini glass. Evocative of speakeasies, Nick & Nora glasses are and can be used for pretty much any drink served in a Coupe. Store in a refrigerator or ideally a freezer so they are well chilled before use. Named after Nick and Nora Charles, a fictional couple created by Dashiell Hammett in his novel The Thin Man. Nick is an alcoholic private detective married to Nora, a wealthy Nob Hill heiress. The film portrays the glamorous couple enjoying 1930s cocktail culture. The book and its characters were later adapted for a series of movies (1934-1947), radio (1940s), television (1950s) and as a Broadway musical.
Capacity to brim: 4oz-6oz / 17cl-18cl
Urban Bar Nick & Nora 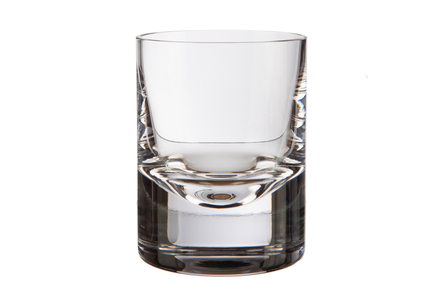 Another glass whose name refers to the best-known drink served in it, it is also great for enjoying spirits such as whisky. Choose a luxuriously large glass with a thick heavy base and a flat ground rim.
Capacity to brim: 11oz / 32cl
Urban Bar Koto Old Fashioned 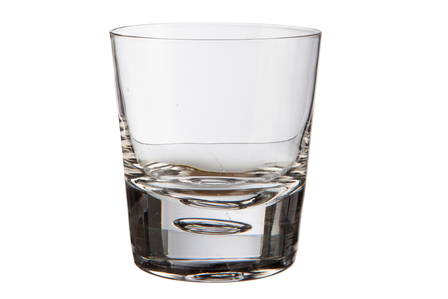 Sometimes referred to as DOF glasses, Double Old-Fashioned are simply extra-large Old-Fashioned glasses. They are synonymous with tiki drinks such as the Mai Tai where their large volume capacity allows for a generously sized drink to be served with crushed ice.
Capacity to brim: 12oz-16oz / 35cl-47cl 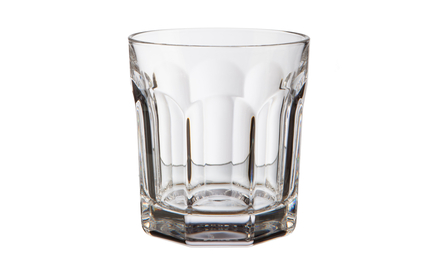 Basically a utilitarian Old-Fashioned glass, but stronger with thicker glass and rim, often made from toughened glass so better suited to drinks that require muddling in the glass. A hardy glass, if there is such a thing.
Capacity to brim: 9oz-11oz / 27cl-32cl 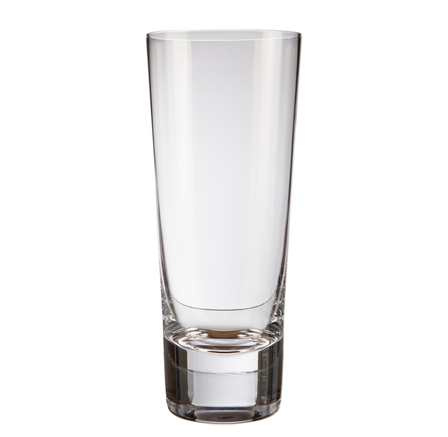 Named after the Collins cocktail, the name 'Collins' is something of a catch-all term for tall slim straight sided glasses. Not to be confused with the similar, slightly squatter and broader, and importantly smaller, 'hi-ball' glass. A 12oz Collins glass will suffice for cocktails and perfectly accommodates a 330ml bottle of beer or soda. However, many favour the use of larger 14oz glasses.
Capacity to brim: 12oz - 14oz / 35cl - 41cl
Urban Bar Koto 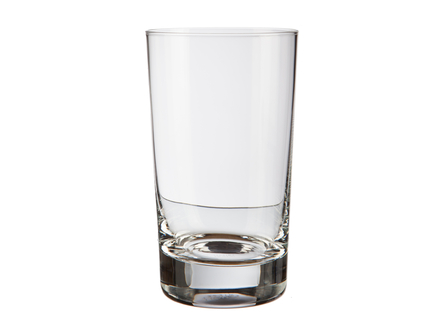 Tall and narrow (in proportion to its height) with straight or slightly flaring sides. As David Embury says in his The Fine Art of Mixing Drinks, "Don't expect to have the Highball which you order at a bar served in anything larger than a Sour glass unless you order a double. It is a decidedly generous bar that gives you a full 2-ounce drink in a Highball. Two ounces of liquor in a 14 or 16 ounce glass filled with ice and carbonated beverage would more nearly resemble the traditional Sunday-school lemonade than a Highball." Ideally use 8oz (235ml) Hi-ball glasses as these are the optimal size for both highballs and fizzes. Use frozen or at least chilled.
Capacity to brim: 6oz-10oz / 18cl-30cl 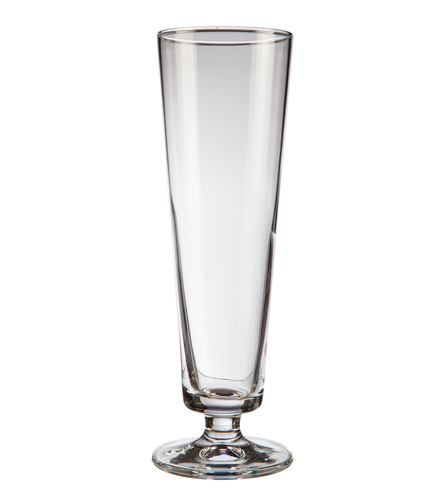 Reminiscent of a pilsner beer glass, these tall elegant glasses are perfect for long drinks and can be used in place of a Collins glass. The Sling is named after its own category of cocktails and is most identified with the Singapore Sling.
Capacity to brim: 11oz / 32cl 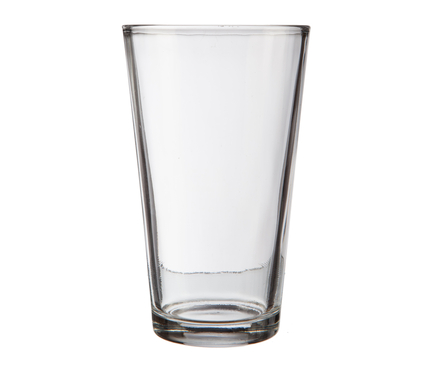 A tall, heavy conical glass with a thick rim which, depending on how you view it, is either designed for serving beer or to be combined with a Boston tin to form a shaker. It can also be used as a mixing glass for stirred drinks.
Capacity to brim: 17oz / 48cl 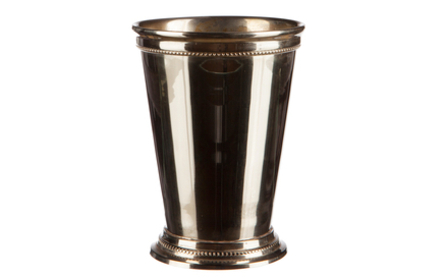 Traditionally, Mint Julep cocktails are served in these short conical-shaped cups. The best ones are silver or pewter but stainless steel versions are more commonplace. They should be stored in the freezer, but even when used at room temperature the crushed ice used when serving a Mint Julep will ensure a thick frost forms, coating the outside of the cup.
Capacity to brim: 12oz-13oz / 35cl-38cl 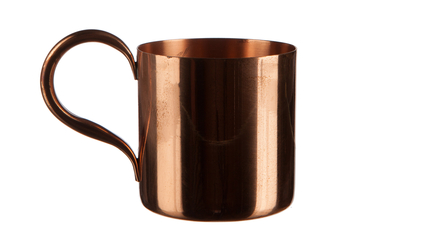 Usually engraved with a kicking mule, these small copper mugs were originally, and are still used to serve vodka-based Moscow Mule cocktails. Now, just about any cocktail topped with ginger beer and served in a copper mug has 'Mule' in its name.
Capacity to brim: 12oz / 35cl 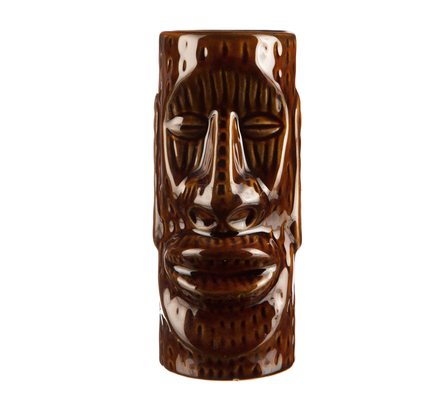 Coming in all shapes and sizes but most commonly tall and tubular, these ceramic mugs with a glossy glaze are usually embellished with totem pole-like tiki idols or shaped liked figurines.
Capacity to brim: 14oz-22oz / 41cl-65cl 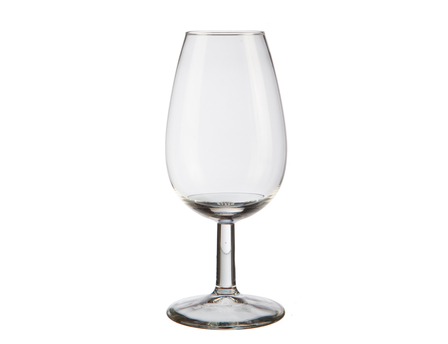 A small stemmed wine glass which tapers inwards towards the rim to concentrate the aromas inside. Not to be confused with similarly sized Sour glasses below which taper out from the stem.
Capacity to brim: 4oz-4.5oz /12cl-13cl 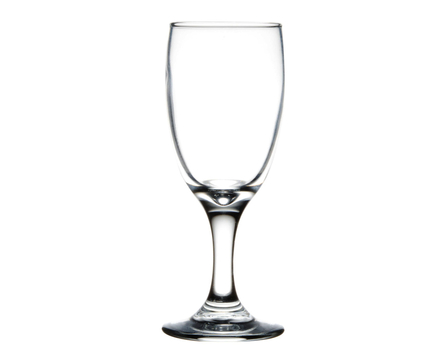 This small glass is narrow at the stem and tapers out to a wider lip. As the name would suggest, it is used for serving sours straight-up. Many favour serving sours over ice in an Old-Fashioned glass but any of the sour recipes in this book can be strained and served 'up' in this glass.
Capacity to brim: 3-5oz / 9cl-15cl 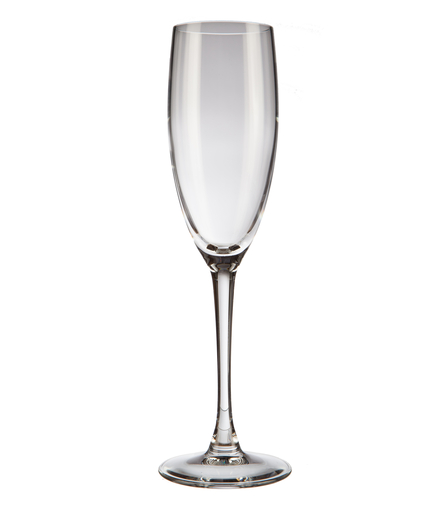 Flutes are perfect for serving champagne cocktails as their tall, slim elegant design helps maintain the wine's fizz. Be sure to chill well before use.
Capacity to brim: 6oz / 17cl 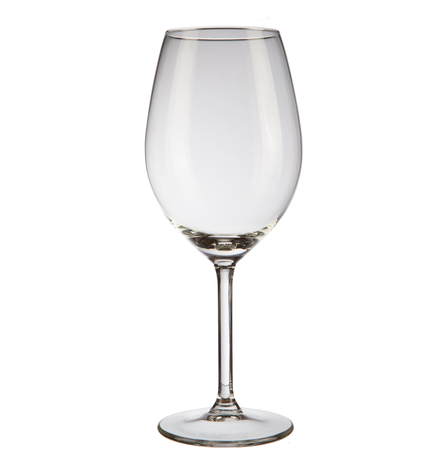 Not often used for cocktails, but worth having, if for no other reason than to enjoy your wine. An 11oz glass is big enough to be luxurious. Thin glasses with flat ground rims (rather than rounded) are even more luxurious.
Capacity to brim: 11oz / 32cl 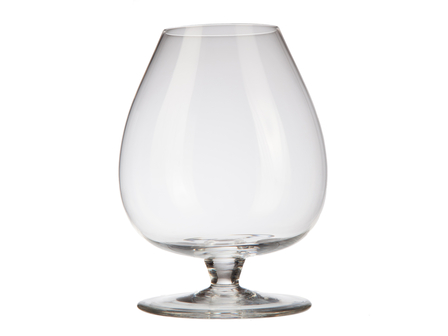 Perhaps best-known as a 'Brandy Balloon', the bigger the bowl, the more luxurious the glass appears. Use to enjoy cocktails and deluxe aged spirits such as cognac. Fashion has it that cocktails served in Snifter glasses are often lightly warmed.
Capacity to brim: 12oz / 35cl 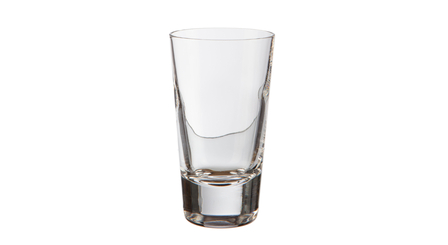 Shot glasses come in all shapes and sizes. You'll need small ones if you're sensible and big ones if you're not. If you are serving layered shots then choose tall, thin glasses to accentuate the thickness of each layer.
Capacity to brim (pictured glass): 2oz / 6cl 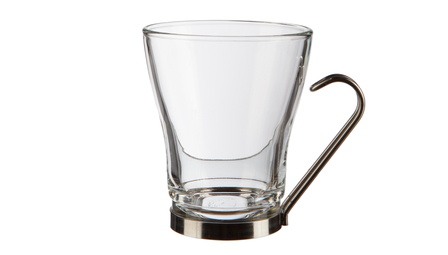 Frequently referred to as a 'liqueur coffee glass', which is indeed its main use, this glass was popularised by the Irish Coffee. Ideally, Toddy glasses are tempered (either chemically or with heat) so to better withstand heat. They usually have a stem or a handle to allow hot drinks to be comfortably held but handles prevent the glass from being tempered. Whether tempered or not, Toddy glasses should be pre-heated with warm-hot water prior to the hotter drink being poured to lessen the risk of cracking the glass.
Capacity to brim: 8.5oz / 25cl 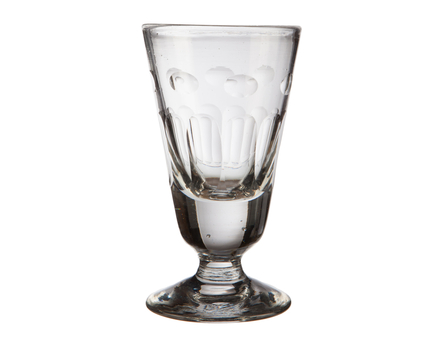 Tall, wide rimmed, footed glasses, often with a dose line, bulge or bubble roughly a quarter of the way up from the foot to indicate how much absinthe to pour (typically 1oz to 1¼oz dose).
Capacity to brim: 8oz-11oz / 24cl-33cl

It's not just the great British cup of tea that is served from such vessels with many cocktails, usually served chilled, presented in a tea cup - perhaps a reference to alcoholic drinks being served in tea cups during Prohibition to disguise the fact that they were alcoholic. Fashion dictates that these are either glass cups nestled on china saucers or china cups fixed atop glass stems.
Capacity to brim: 6oz-8oz / 18cl-24cl 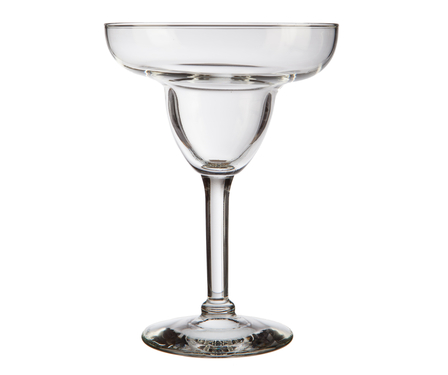 Named after the eponymous cocktail, this curvy glass shaped like an upside-down sombrero hat is still predominately used for serving Margaritas. Its rim cries out for salt. Consider using a more modestly shaped and sized Coupe.
Capacity to brim: 8oz / 24cl 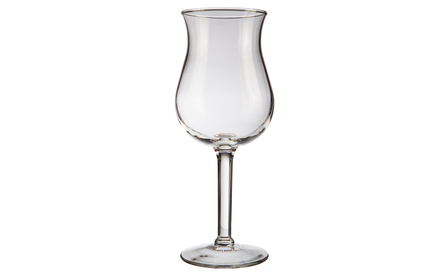 Sometimes referred to as a Piña Colada glass, the Poco Grande is a big-bowled glass and is commonly used for frozen drinks (served with crushed ice). It screams out for a pineapple wedge, a cherry and possibly a paper parasol as well.
Capacity to brim: 14oz / 397ml 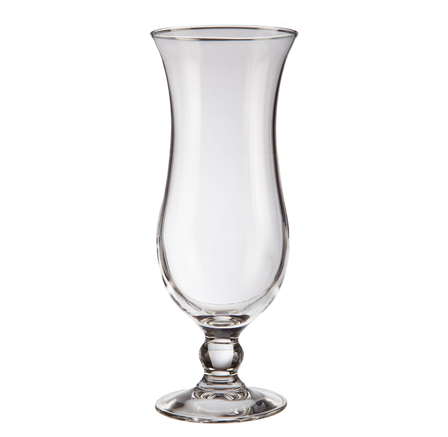 Similarly shaped but taller and much larger than a Poco Grande glass, Hurricane glasses resemble the glass of a Hurricane lamp, hence the name. Like the Old-Fashioned, Collins and Hi-ball, these glasses are synonymous with the eponymously named drink - indeed it is rare to see anything other than a Hurricane cocktail served in this ridiculously large glass.
Capacity to brim: 20oz / 60cl 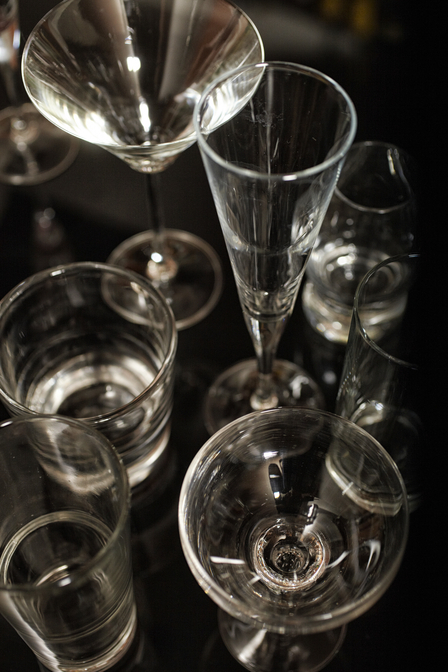