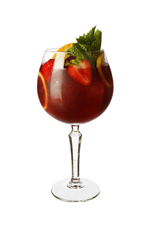 The holiday celebrates the anniversary of King Juan Carlos I signature of the Statute of Autonomy of La Rioja in 1982. La Rioja's became a self-administrated province in 1833, originally under the name Logroño, after its capital town. The province was renamed La Rioja in 1980 in deference to the importance of its world-famous wines to the region.

Although La Rioja boasts over 500 wineries, it is the least populated region of Spain with a little over 300,000 inhabitants.

In La Rioja, they'll be celebrating by flying the region's own flag consisting of four horizontal bands of red, white, green, and yellow with La Rioja's coat of arms at its centre. The symbolism of this flag's four colours illustrates the importance of wine to the region: Red = vineyards; White = light; Green = orchards; Yellow = fertility.

Obvously, Día de La Rioja is a great excuse to crack open a bottle of rioja wine or two, and perhaps start early with a Sangria.

In 1923, George Mallory wrote, "The first question which you will ask and which I must try to answer is this, 'What is the use of climbing Mount Everest?' and my answer must at once be, 'It is no use.' There is not the slightest prospect of any gain whatsoever."

On this day in 1924, during the third British attempt to summit Everest, George Mallory and Andrew Irvine, climbers who climbed not for money, or for fame, but for the challenge, were lost for good on Everest.

One of them, no one knows which, had been seen the day before on the summit ridge about 245 metres (800 feet) below the top. Mallory's body was found in 1999, but neither Irvine's body nor the camera he was carrying has been recovered. Did they make it to the top? Nobody knows, but climbing historians continue to obsess over various theories.

These two brave men, who climbed into the unknown with home-made oxygen apparatus, really do deserve celebrating with an appropriately named Resolute.