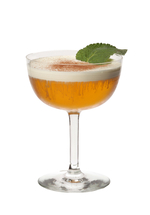 The story continues, that when Craig's distinctive golden-coloured whiskey was sent down the river to New Orleans, numerous requests came back for the 'whiskey from Bourbon', a reference to the stamp placed on the barrels at the port of Mayville, Bourbon County, from where his product was shipped down the river.

Let's not let the truth stand in the way of a good story - or a good excuse to drink bourbon. So, we're toasting the good Reverend with a Haberdasher - made reverential by its use of Chartreuse. And such a momentous day calls for more than one drink so we present our 20 best Bourbon cocktails for your delectation.

Sandpaper is a simple enough invention but invention it is, and so patented it, this day in 1834 by one Isaac Fischer, Jr, of Springfield, Vermont.

Blood transfusion was first attempted back in the 17th century when a doctor transferred blood from one dog to another - without killing the recipient. Unfortunately, attempts on people often proved fatal, so it took a couple of hundred years - and quite a few dogs - before transfusions took off.