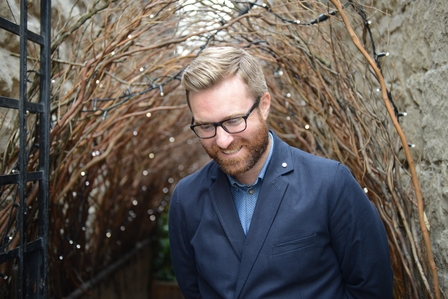 If everything had gone to plan, drinks consultant Andy Gemmell would have been a professional footballer, like his uncle, his grandfather, and his great-grandfather before him. “I grew up in quite a working-class background, and that was your ticket out, being a footballer,” he recalls. “Education wasn’t high up.”

After securing a schoolboy contract with Greenock Morton, his local team, Gemmell left school aged 16 with, he believes, precisely two qualifications. But life had other plans, and when the ligaments in his ankle snapped for a second time, he knew his career was over.

For a while, Gemmell drifted, trying all sorts of jobs – postman, butcher, labourer… – as he dealt with his shattered dream. He had worked in the pub his uncle owned as he was growing up, yet never considered it as a career.

“Then I went to work in a place called Connolly’s in Greenock,” he recalls. “A guy called Tommy Hutchinson was the manager of this place. I’d never seen anyone in my life being able to control people the way Tommy did. He could turn it on and off: he could speak to the businessmen and make them feel great, then speak to a hen party and make them feel good. He had hospitality absolutely running right through him.”

It would be fair to say that Greenock, a small town on the west coast of Scotland, was not a maelstrom of cocktail creativity as the millennium approached. But Gemmell’s cousin Scott upped sticks for Glasgow and started work at TGI Friday’s, the chain operation whose rigorous training programme and expansive cocktail menu gave bartenders including the Be At One founders and Living Ventures’ Tim Bacon their start. “He said, ‘You need to come down and work with me,’ and I said there was no way I was going down there,” Gemmell recalls. “Then he said he was making £100 a night in tips, and I was straight on the train.”

Demoted from manager of a pub to bar back, a small cog in the TGI Friday’s machine, Gemmell took his new role seriously, progressing to Scottish champion in the much-maligned art of flair bartending. “The cocktails weren’t incredible,” he says, looking back. “But it was the experience, and the idea that you could be a career bartender.”

Together, Scott and Andy went out on a limb, and started an events and training company, Liquid Assets. Tom Hunter, the Scottish multimillionaire, was an early supporter. “I still do stuff for him today,” Gemmell says. “Back then, I was his personal bartender, we flew all over the world with him, doing a lot of parties and stuff. He’s been a great influence in my career: he’s never funded us, but he’s given us opportunities.”

Another influence was Angus Winchester, the veteran drinks maven and former Tanqueray Gin ambassador. “Angus asked me to come to the Far East and do a lot of stuff, and he started to show me a different side of the industry,” Gemmell says. “A pivotal moment would have been sitting in a tiny little cocktail bar in Tokyo with Angus in 2002, and watching a bartender carve a piece of ice, and all those intricacies of creating a cocktail – that moment was when I started to really look into the mixology side, not just throwing empty bottles about.”

He returned to Scotland enthused with the idea of running his own bar, just as Edinburgh’s bar scene began to take off. “I opened a bar called Tonic Tonic in Edinburgh, then one in Spain, which didn’t do well, but that’s life, then another in Glasgow,” he recalls. (Tonic, under the eye of his former business partner, is still very much in business today.)

Gemmell’s first son, Joshua, was born in 2004, and the long hours of running a bar began to take their toll. So, when drinks distributor Maxxium approached, a move to the brand side made sense. “It wasn’t just that I wanted my weekends back,” he says. “I was up for a new challenge. I wouldn’t advise every bartender to pursue that commercial world, but it made sense to me.” He worked alongside Wayne Collins in the UK and Jason Crawley in Australia: in 2012, Jason started a Sydney creative agency, The Drink Cabinet, with fellow trainer Dylan Howarth.

Gemmell had worked at Maxxium for over seven years when Bacardi came calling with the role of global whisky ambassador. “They were in the process of dealing with five distilleries, and they wanted to look at the five new single malts they were going to release, because they’d just done blends before: it was working with Stranger & Stranger on the bottle design and the liquid, as well as being the brand ambassador for Dewar’s at the time,” Gemmell recalls. The project was a masterclass in building a brand from scratch, and pretty all-consuming for two years – although it didn’t stop Gemmell approaching The Herald, Glasgow’s answer to The Times, and proposing a bar review column he’s still writing today.

Gemmell met Lauren Stewart, now his partner in business and life, when she was helping Scott out with his own drinks business. With a second child, it was time for another change. “I didn’t know what to do, whether to buy another bar or what, but I was already doing some consultancy, so Jason said, ‘Why don’t you take the name and start up here?’” he recalls.

In September 2014, the couple launched The Drink Cabinet UK. A business started with just the two of them has grown to a team of 22, covering events, brand development, and creative, digital, social and experiential marketing. “The big advantage for starting a drinks agency was that I’d worked on the client side, and I’d seen so many agencies who didn’t get it, as well as some that were just so fantastic,” Gemmell says. “But I could not have done this without Lauren. She’s an incredible human being, she’s an absolute juggernaut when it comes to keeping me on track.”

Growth was organic and opportunistic: Gemmell took chances as they came along, using his understanding of the drinks industry as a springboard into executing in related areas. “I surround myself with young creative people – we’ve got loads of young designers from different backgrounds,” he says. “I think if you get too surrounded by the drinks industry you can get a bit caught up in that, a bit tunnel vision: I like to have people who can look into different areas.” Today, their impressive client list includes Glenfiddich and Macallan.

As he matures, Gemmell is also keen to give back, primarily by providing other less privileged Scots with a route into the world of hospitality. Alongside Stuart McCluskey (The Devil’s Advocate), Mike Aikman (Bramble) and Graham Suttle (Kained Holdings), he co-founded The 100 Scots, a platform to celebrate Scottish food and drink and inspire a new generation of Scottish hospitality professionals.

“One of our big movers was that a young guy in the East End of Glasgow would never think of settling behind the bar or becoming a waiter: in the UK it’s something you’d do as a part time job at uni,” Gemmell says. “We work with a company called the School of Hard Knocks. Some of these kids have been through hellish times, and we try and give them inspiration for things they could do with their lives.”

Never one to rest on his laurels, Gemmell collects the keys to a new bar next Friday, right across from the Barrowland Ballroom, one of Glasgow’s best-known music venues. “It’s not necessarily going to be a cocktail bar, it’s just going to be a great bar,” he says. “It’s going to be closed during the day, and a lot of work we’re doing getting young people into hospitality will be done from there: we’ll be engaging with local schools.”

All in all, it’s not a bad outcome for a career-ending injury. But then, even growing up in Greenock, Gemmell always knew he was destined for something else. “I always had illusions of grandeur: growing up, I always thought I was better than everyone else, because they wanted to settle down and just have a life in Greenock, and there was no way that was going to happen,” he says. “I’ve always been absolutely confident in what I can achieve when I settle down to something: it’s just being able to channel that.” And with The Drink Cabinet UK, it looks as though he has.