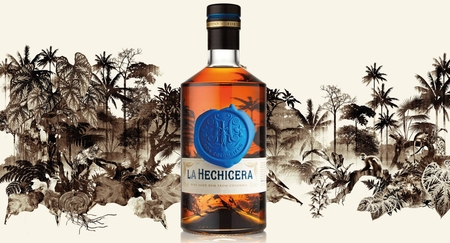 “Hechicera is the Spanish word for ‘enchantress’ and we’ve chosen it as a brand name because it underlines every aspect of Colombian identity, it’s a perfect metaphor to refer to Colombia.

"Colombia is, by far, the most bio-diverse country on earth, it has many different mountains and landscapes so that every couple of kilometres you have a completely distinct ecosystem. We Colombians feel Colombia is a feminine entity and ‘La Hechicera’, ‘the enchantress’, is precisely that, it’s a celebration of Colombia’s feminine energy, of its fertility, of the seductive nature of the shades of green, of the typography or geography in general and it’s precisely what we wanted to reflect on the bottle.

The Sierra Nevada de Santa Marta is a place where you can stand at an altitude of 6,000 metres on a snow peak and look at the Caribbean on the horizon, it’s a place of complete and absolute contrasts. One hour north, you have sand dunes, very much like the deserts of Namibia, an hour south are marshes and swamplands, and then five minutes north and you have the city of Barranquilla, which is one of the most industrial cities in Colombia. And that is just the Caribbean region, so it’s different to that very plain, though placid, version of the Caribbean, it’s all about wilderness and it’s all about something lush. It’s all about, tropical exuberance where green vegetation and life proliferates in every single corner of the region.

The ancient Tayrona people today, the tribes are called the Arhuacos, the Kogis and the Wiwas, which inhabit the Sierra Nevada de Santa Marta, believe it is the world’s navel, they call it ‘the middle of the world’, ‘the heart of the world’, and they believe it’s the source of all life and wisdom, which is why we wanted to celebrate it so clearly on our bottle. We also wanted to rescue Caribbean from a different era, from the time of Mambo and white dinner jackets and Panama hats, it’s a premium Caribbean, it’s the Caribbean seen in cinema, it’s a Caribbean that was very much the norm in Colombia in the 1950’s, so we also wanted to use that very clearly on our label.

We found this beautiful bottle that, in a way, also celebrates the rum-making process. It looks like an antique pharmacy bottle, which is a beautiful way to celebrate the alchemy involved in making rum. And it also draws back to the name La Hechicera, the enchantress, the sorceress, because it’s also about making potions and I guess it also draws a bit from alchemy as well.

La Hechicera is a feminine brand in a very male-driven super-premium rum category, but we wanted to very clearly state our ideal as to what rum should be. So, we put this inscription on the neck of the bottle which says ‘fortiter in re suaviter in modo’, a Latin inscription meaning ‘resolute in being, gentle in execution’, because it might be a feminine brand in its essence, but it’s a very, very characterful, aged, crisp rum. So, it’s very resolute in being, it’s very strong on the palate, but it passes down so smoothly, it’s very gentle in execution.

The praying mantis is very appropriate for La Hechicera, it’s a creature that is very green, it’s very elegant, it’s very nimble and it looks almost inoffensive, but it has this way of hypnotising its prey and striking while least expected. It’s about celebrating that version of femininity – beautiful but also somewhat unexpected, exotically-Latin with a dash of danger. The praying mantis devours the male during mating, so I guess that also, with a bit of humour, just goes back to the idea about that exotic feminine entity that is Colombia." 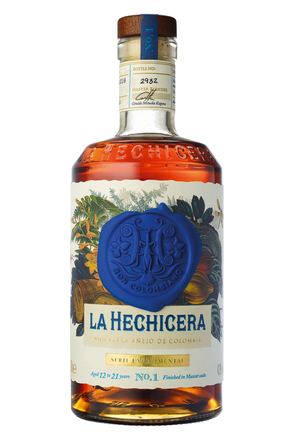 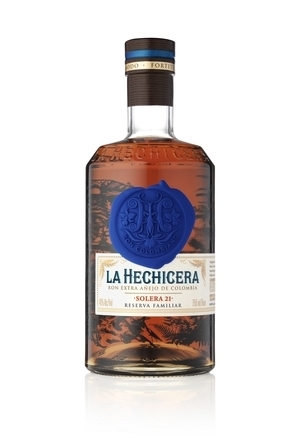