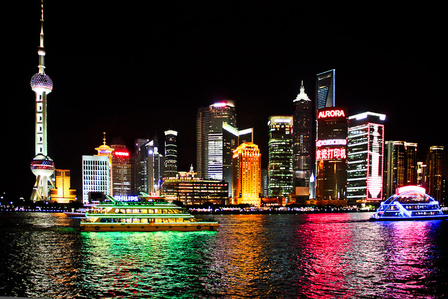 An industrial powerhouse that's home to rising 25 million people – a larger population than most European countries – Shanghai has long been mainland China's most cosmopolitan city. And, from the colonial elegance of the French Concession's shady streets to the neoclassical grandeur of The Bund and the high-rise, skyrise glitz of Pudong, this global icon has style in spades.

Rather like Hong Kong, Shanghai was nothing but a sleepy fishing village until the Opium Wars, when Britain and allies went to war with China to force the Emperor to abandon drug control and accept imported opium. Today, it's China's capital of bling, an engine of growth, and home to art, fashion and foodie scenes that are every bit as good as you'd expect from a mega-city.

Shanghai moves fast. And since around 2012, its bar scene has evolved at light speed. Yes, there are plenty of big, brazen bars, menus studded with lucky 8s, where the children of China's business and political elite splurge on status spirits and swill champagne. But there are also some seriously talented bartenders, who navigate Shanghai's wickedly accelerated bar scene with ease and grace, a handful of world class speakeasies and, of course, a myriad bars with a view.

Shanghai is a thoroughly international city, and bar menus and signage are in English. Cab drivers, however, do not speak or read English, and won't understand amateur attempts at Chinese: show the driver the Chinese characters instead.

Oji
This bar within a bar opened in December 2015, taking Shanghai's speakeasy craze to new heights. Yet it's not the secret entrance from inside El Ocho that amazes - dial zero on the retro telephone for entry - but the passion and attention to detail. 4.5/5
El Ocho, 3/F Zhang Yuan, 99 Taixing Lu, Jing'An, Shanghai 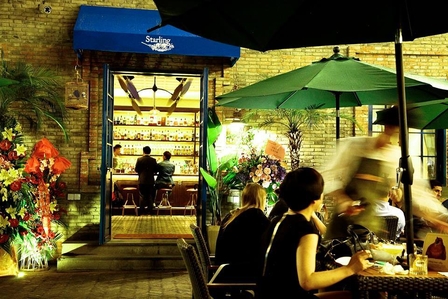 El Ocho
From the same successful family as El Coctel, El Ocho sits alongside Starling in Zhong Plaza, but delivers a very different vibe. It's a warren of moody, dimly lit, mirror-lined rooms on the third floor - a pocket-sized terrace caters to smokers - with velvet seats around a sunken bar. Why Ocho? Well, it's Spanish for eight, eight is lucky, and the Chinese are obsessed with lucky numbers. 4/5
Zhong Plaza, 99 Taixing Road, Jing'an (静安区泰兴路99号, 近吴江路) 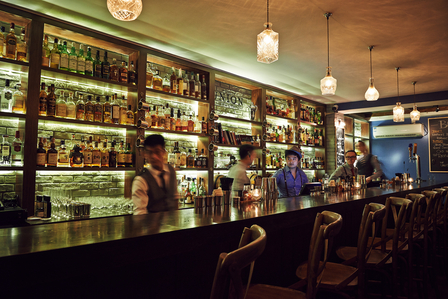 The Union Trading Company
Chef Austin Hu and Shanghai cocktail star Yao Lu own and operate this long, narrow two-storey space, which opened in July 2014 in (but of course!) the French Concession. Design is clean and unfussy, with exposed brickwork, barrels for ageing cocktails, plenty of books and the odd piece of Americana, but only the most passing nod to Shanghai's speakeasy craze. 4.5/5
64 Fenyang Lu, entrance on Fuxing Zhong Lu, French Concession (徐汇区汾阳路64号,近复兴中路) 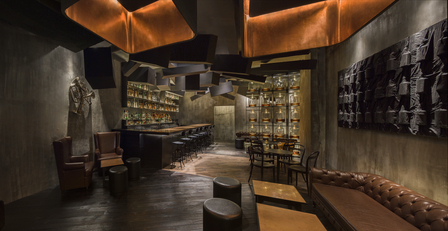 Flask
Aware that Flask is entered through a vintage Coca-Cola vending machine in what appears to be a sandwich store undergoing refurbishment, I confidently approached a shuttered plywood building next door. Don't do this. It is, in fact, an actual building site. 4.5/5
432 Shaanxi Nan Lu, near Yongjia Lu, French Concession (徐汇区陕西南路432号, 近永嘉路)

Speak Low
In Shanghai, speakeasies are even more common than fake markets. A casual wander through the French Concession reveals bars nestled behind clothes shops, phone booths, vending machines, and more. But Speak Low, the brainchild of Shingo Gokan, formerly of NYC's Angel's Share, is a speakeasy of such textbook perfection that it set the bar for all the rest when it opened in 2014. 4.5/5
579 Fuxing Zhong Lu, near Ruijin Er Lu, French Concession (黄浦区复兴中路579号, 近瑞金二路) 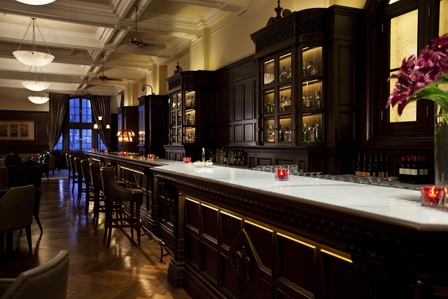 Long Bar
If you were to invent a fantasy five-star hotel bar on a landmark location, the Long Bar is probably what you'd come up with. There's dark wood panelling and cabinets, Chesterfield sofas and leather armchairs, idling ceiling fans and a grand piano - even river views from the right-hand front table. 4.5/5
Waldorf Astoria Club,The Bund, Shanghai

Barber Shop
While some Shanghai speakeasies can be on the sombre side, Barber Shop has a sense of fun: bouncy big band, swing and jazz keep the clientele buzzing. 4/5
51 Fenyang Lu (near Fuxing Zhong Lu), French Concession, Shanghai

Constellation
Not only is Constellation now the flagship of a substantial bar group, but it's the place where China's cocktail culture began. And, in a city where bars can open and close inside a month, that longevity is no small achievement.  4/5
86 Xinle Lu (near Xiangyang Bei Lu), French Concession

Tailor
Fumbling around the streets looking for your destination is a key part of any night out in Shanghai, but for pure discretion Tailor takes the biscuit. Bang opposite Jing'An Temple, on the corner of Huashan Lu and Yuyuan Lu, is a Chinese pharmacy. Next door to the pharmacy is a stainless steel unmarked lift. That lift brings you directly up to Tailor on the third floor. 3.5/5
2 Huashan Lu, opposite Jing'An temple, Jing'An