Germany’s second city, Hamburg's size and wealth comes from its being Germany’s largest, and Europe’s second largest port. Dockside cranes, old warehousing and screaming gulls are all synonymous with Hamburg, a city generously laid out around, and seemingly over, two large lakes and the mighty Elbe River. While not a great bar city as such, Hamburg boasts at least one of the world’s very best bars

There have long been a lot of sailors in Hamburg, so it's perhaps not surprising that the city is home to one of Europe's largest red-light districts, the Reeperbahn in St Pauli. The sex shops, strip shows, prostitutes and dive bars that dot this and the surrounding neighbourhood attract more than 20 million visitors a year. It's grimy, seedy and plagued by pickpockets but it's a square mile you must visit.

Hamburg's St. Pauli quarter is also where John Lennon said "he became an adult" and the Beatles honed their style and line-up while playing there between 1960 and 1962. Three of the four clubs where they performed remains in business: The Indra Club, the Kaiserkeller and the Top Ten Club. The most famous ex-Beatles venue, the Star Club, has been demolished and the Beatles museum closed due to lack of visitors. The Fab Four may not be as fab as they once were, but Beatles tourism continues with Beatles tours (beatles-tour.com) and a dedicated square, the Beatles-Platz.

With the mighty Elbe River and its two large lakes with canals threading their way into the city centre, water is a dominant feature. Indeed, Hamburg boasts 2,302 bridges, more than Venice, Amsterdam and London combined, while the cobblestone alleys and 17th-19th-century houses around Deichstrasse and Speicherstadt, in the old harbour district, are somewhat reminiscent of Amsterdam.

So important was shipping to Hamburg that a large area known as HafenCity was designated a free port, a duty-free zone where goods could be consolidated from one ship to another without attracting import tax. Today, this watery enclave with its refurbished old port warehouses is Europe's largest inner-city development project with the Elbphilharmonie (Elbe Philharmonic) its centrepiece. This concert hall, designed to rival the Sydney Opera House, is Hamburg's tallest, and Europe's third most expensive building. For that reason, the locals, whose taxes have paid for it, hate it.

HafenCity is perhaps Hamburg's most exciting area (a different kind of excitement to St Pauli, granted) and is the area where we recommend you stay. We stayed at the 25 Hours Hotel a quirky, sailor-themed hotel overlooking the docks. Clean, comfortable and well-appointed rather than luxurious, 25 Hours offers not just free Wi-Fi but free bike hire. Many of the city's attractions are close by and it's a mere 15-minute walk to the Rathaus.

Built in 1897 out of sandstone in Neo-Renaissance style, the Rathaus is Hamburg's regal city hall (one of Germany's 16 state parliaments) overlooking an equally impressive square. The city's wealth is not only evident in this building's splendour, but also the luxury boutiques that line the nearby Neuerwall shopping street. However, dear discerning drinker, forget architecture and retail therapy, Hamburg's most important bar, Le Lion - Bar de Paris lies a mere drunken stumble away. 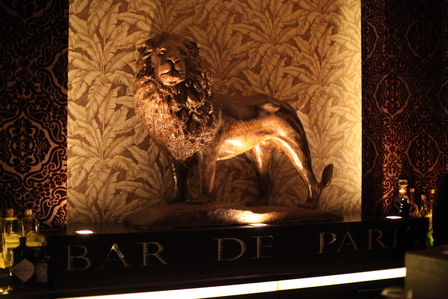 Le Lion - Bar de Paris
3 Rathausstrasse, Altstadt, 20095
Widely recognised as being one of the world's 20 best bars, Le Lion lies behind a locked door and buzzer system but is open to anyone who makes a reservation. The original ground floor is a plush lounge where the bar and its bartenders are very much the focus, yet it remains strangely discrete. By contrast, the newer Pine Room above (opened Feb 2016) is set out around the bar which dissects the room. Indeed, guests walk through the centre of the bar to access the small lounge area beyond, but most of the seating surrounds the bar itself with the bartenders performing centre stage. More info
Difford's Guide rating: 5+/5 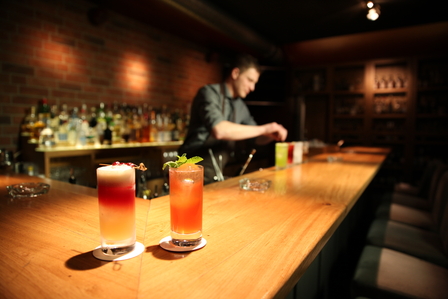 The Boilerman Bar
Eppendorfer Weg 211, Hoheluft West, 20253
The Boilerman is Joerg Meyer's other bar (see Le Lion). It couldn't be more different and he set out to ensure it was. Boilerman is best described as a dive/neighbourhood bar with great drinks. There's a very good range of bottled beers and American whiskey, but The Boilerman is justly famous for its highballs. More info
Difford's Guide rating: 5/5 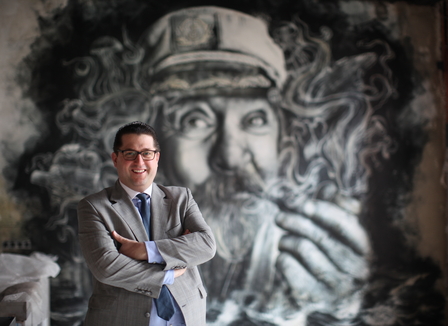 Boilerman Bar (HafenCity)
Osakaallee 12 (entrance on Überseeboulevard), HafenCity, 20457
So popular is Jörg Meyer's Boilerman Bar that it was felt the good people of Hamburg needed a second one. Much bigger than the original, Boilerman No.2 opened in March 2016 in the 25 Hours Hotel in HafenCity. We visited in February whilst still a building site but even then this looked an impressive space. We expect brilliantly executed Highballs served in a fun environment. We also expect many more Boilerman Bars to spring up across Europe and indeed the world. 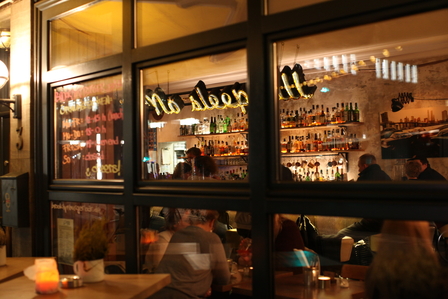 Brooklyn Burger Bar
Alter Fischmarkt 3, Altstadt, 20457
This hamburger restaurant come bar lies a short walk away from the Rathaus in the centre of town. If you want to be sure of a seat here then you'll need to arrive early - very early, such is the draw of the combination of great burgers, craft beer and brilliantly conceived and executed cocktails on offer here. The atmosphere is laid back, the music good but it's the food and drink which ensures this should be one of your first stop offs when in Hamburg. More info
Difford's Guide rating: 4.5/5 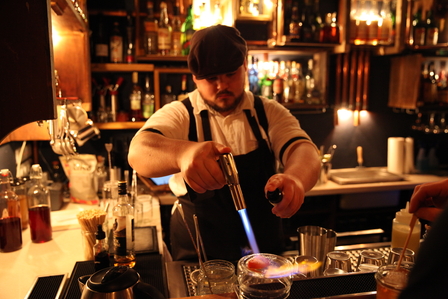 Kleines Phi
Feldstraße 42, St.Pauli, 20357
Philip Schulz opened Kleines Phi (Small Phi) on 30 May 2015. It was a momentous day for this talented bartender, as it is not only his first bar, but a bar in which everything was made by him and his friends. With concrete tables the look is industrial but also has the feel of a modern art installation. Check out the precision with which the orange braided flex of the hanging Edison filament lightbulbs is strung over the bar. More info
Difford's Guide rating: 4.5/5

Other bars worth considering 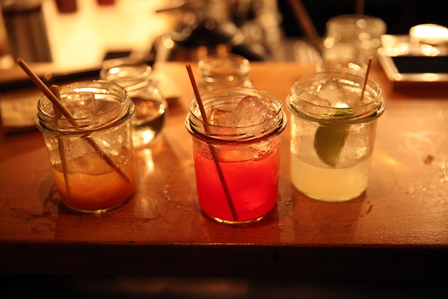 The Chug Club
Taubenstraße 13, St. Pauli, 20359
Meaning 'to drink in large gulps', 'Chug' is a brilliant name for a bar. Bettina Kupsa opened this fun bar in St. Pauli after working in Hamburg's best bars, including Le Lion. Here 'chugs' are small cocktails sized somewhere between a shot and short drink, served in small stemmed glasses. Tequila and mezcal feature heavily and you should also consider a Bandera to accompany the good range of craft beers offered. 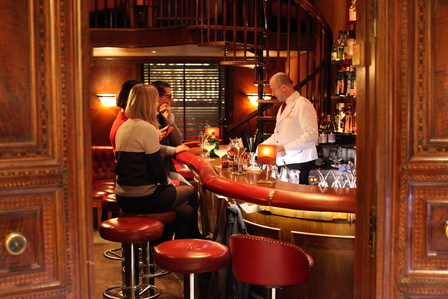 Bar DaCaio
The George Hotel Bar, Barcastraße 3, St. George, 22087
This designer hotel lies less than 15 minutes' walk from Hamburg's Central Railway Station. To be honest we found the cocktails somewhat design over substance but this is a slick upmarket venue with an impressive menu presented in the form of a bar book, and the bar food served here is excellent. In summer a roof terrace offers great views of the city. 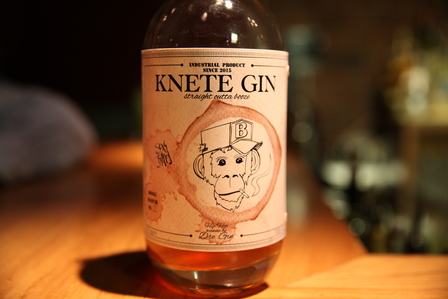 Local Hamburg products to look out for 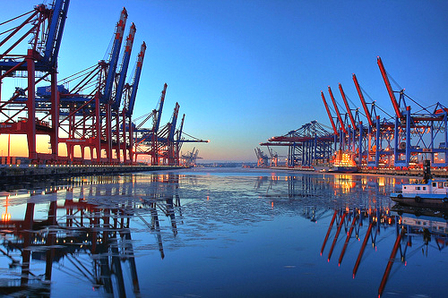 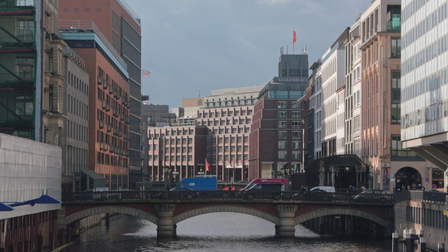