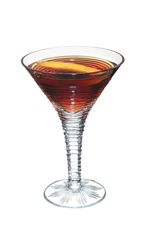 Quebec National Holiday in Montreal and other areas of French Canada takes place on the same day as the feast day of the Nativity of St John the Baptist, patron saint of French Canadians.

It's a public holiday, and celebrations take in solemn ceremonies as well as live music concerts, sporting events, parades, fireworks and more.

Today's delicious cocktail and is called none other than a Quebec

It's the anniversary of the Battle of Bannockburn

This day in 1314 was the second and decisive day of the Battle of Bannockburn - that is, for non-Scottish readers, the battle that wraps up Braveheart, with Mel Gibson's warrior spiritually present and inspiring the great victory.

The actual battle marked the culminating moment of the First Scottish War of Independence when a Scots army defeated an English army almost three times its size.

A visitors' centre has been built on the original battlefield and every year the anniversary is celebrated by reenactors recreating the battle, musicians, storytellers and, of course, representatives of Scotland's finest food and drink.

We'll be there in spirit - just like Mel - with a Flying Scotsman, a honeyed blend of Scotch whisky, sweet vermouth, bitters and a hint of sugar.

It's the anniversary of the Roswell Report's publication

On this day in 1997, the US Air Force released a report on the Roswell UFO rumours, entitled "Roswell Report: Case Closed". This was either one small part of the greatest cover-up known to man, or a waste of taxpayers' money on crazies, depending on which side of the fence you sit.

Since approximately 1947, folk around Roswell airforce base had been observing strange goings-on, most notably, allegedly, the recovery of a crashed alien spacecraft complete with bodies, but also plenty of UFOs.

The Air Force report, the last of a series into the Roswell rumours, found that the "alien bodies" were air force personnel, killed or disfigured by high-altitude accidents, or crash test dummies dropped from high-altitude balloons.

The spacecraft were high altitude balloons and the UFOs space probes. As rational thinkers, we are toasting the report with a Steep Flight, which is, after all, where it all began.