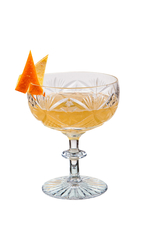 On this day in 1906, the legendary hotelier César Ritz opened the London Ritz, on the site of an old coaching inn, not far from the Savoy from which he had been fired after thousands of Pounds worth of booze (the equivalent of tens, if not hundreds of thousands of Pounds today) mysteriously disappeared.

The 13th son of a Swiss farmer, Ritz started his career as a teenage waiter in a small hotel, whose owner told him he would never succeed in his dream of becoming a hotelier. Ritz moved to Paris at the age of 17, and later started a restaurant with the chef Auguste Escoffier.

He opened the Ritz Paris, still one of the great hotels of the world; London came eight years later. Ill-health forced him to retire, however, before he could open the Ritz Madrid, and he died before "Puttin' on the Ritz" became a byword for style.

So today why not toast the London Ritz with a Ritz Cocktail, created by King Cocktail himself, Dale DeGroff?

It took 14 years to build - and brought the world the term "the bends", for the decompression sickness that divers suffer, after 20 men died and many more got sick working in underwater cells, or "caissons", to dig its foundations.

At the time, Brooklyn wasn't a part of New York. Far from it. It was its very own city, with its own mayor and council. But the new bridge made it possible to reach Manhattan from Brooklyn without taking a boat - and the city merged into NYC in 1898.

We love Brooklyn as it is today. And we love the Brooklyn Cocktail, a classical variation on the Manhattan, souped up with rye whisky. Chin chin!

... comment(s) for The London Ritz's Birthday