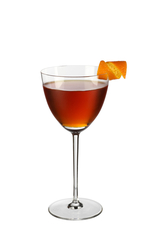 After some digging, it seems the beautifully adorned folk at Sailor Jerry declared today National Bartender Appreciation Day back in 2011, but there's some murky certainty whether it falls on the first Friday in December, or specifically the 8th December - today.

Nevertheless, we've chosen to celebrate a worthy cause, certainly worthier than Pretend To Be A Time Traveller Day (also today). Indeed, so worthy that we'll do it again on World Bartender Day. After all, those behind the stick have faced challenges like never before, and are deserving of more recognition and celebration.

And so there's no better time than today to enjoy a Hanky Panky, a tasty cocktail by a legendary bartender with fernet, a product beloved by bartenders. We're toasting great hosts in bars around the world. Cheers!

On this day every year, Bodhi Day, the Japanese celebrate the enlightenment of Buddha, the moment at which Gautama Siddhartha, while sitting under a bodhi tree, found the solution to the problems he was confronting and achieved Nirvana.

In Japan, the festival is known as "rohatsu", or "eighth day of the twelfth month". Zen monasteries often host a weeklong ritual culminating today, and believers are supposed to meditate for the whole of tonight.

We'll be pursuing our own form of Japanese enlightenment today, with the meditative harmony of whisky and water, lovingly and calmly stirred, that the folk of Japan know as "Mizuwari", or "mixed with water", and often drink with dinner.

It's also Pretend To Be A Time Traveller Day

Fancy being a performance artist for the day? Today is "Pretend to Be a Time Traveller Day", a stroke of pure genius that does exactly what it says on the tin.

Should you wish to participate, you have three main options. Act as a visitor from a utopian future, channel the spirit of a visitor from the past, or go with any dystopian future you care to imagine, be that the world of Twelve Monkeys, The Terminator or Mad Max.

A few starting points? As a visitor from a dystopian future, you might want to opt for a wardrobe of rags and fake prison tattoos, and ask "What year is this?" As a Victorian, you might want to inspect a stranger's smartphone with an air of suspicion and fear.

Even if you're not playing the game, you really should try a Benton's Old Fashioned - one of the world's oldest cocktails enhanced by a futuristic bacon fat wash, it's virtually time-travel in itself.