The anniversary of Fernand Petiot's death 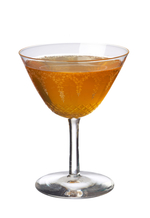 Fernand Petiot was a legendry bartender credited with inventing the Bloody Mary. As if that wasn't great enough, he served drinks to every US President from 1934 to 1972 (except Lyndon Johnson) and could also drink a two-litre glass of beer in 46.5 seconds.

Petiot began his bartending career in Paris mixing drinks at Harry's New York Bar, which was a popular location for American expatriates including Ernest Hemingway. He moved to the US in 1925, and bartended at the St Regis Hotel bar until the day of his retirement in 1966. He passed away in the unlikely surroundings of Canton City, a small town in Ohio, where he'd been working occasionally at Mergus' Restaurant.

The Bloody Mary was our drink of the day a few days ago as the 1st January has been deemed "National Bloody Mary Day", hence we're commemorating Fernand, the father of the Bloody Mary, with a Fernando Cocktail. Of course you may instead decide a Bloody Mary is more appropriate. And you may want to read more about Fernand Petiot and the Bloody Mary.

... comment(s) for The anniversary of Fernand Petiot's death