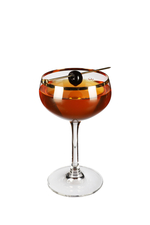 Today's date is a particularly sad one. It is the anniversary of 9/11, the day in 2001 when Saudi terrorists affiliated with Osama Bin Laden and al Qaeda hijacked four planes on a suicide mission. Two flew into the World Trade Center, one into the Pentagon and one crashed into a field in Shanksville, Pennsylvania. Nearly 3,000 people were killed.

After London, New York is our favourite city, so, as the ceremonies commence in Manhattan and elsewhere and the papers fill with reminiscences, we will be drinking a Manhattan. Served in memory of the innocent men, women and children who lost their lives and those who continue to live with the after-effects to this day.

A writer and broadcaster, Markov defected from Bulgaria to the West in 1969. He was on the way to the BBC at the time, where he often made critical broadcasts about the communist regime in his home country. That day he said he had felt a stinging pain in his leg while waiting for a bus and turned to see an unidentified man picking up an umbrella. In 1998 the Bulgarian President, Peter Stoyanov, described the assassination as one of the darkest moments in his country's former communist regime. But it wasn't until 2005 when Francesco Gullino, a Dane who had been recruited by Durzgavna Sigurnost, was revealed as the assailant.

The Battle of Stirling Bridge, on this day in 1297, didn't happen exactly like that, but it was a game-changer - not just for the Scots leader William Wallace, but for knights around Europe. Until that day, a charge by heavily armoured knights had been considered as invincible as tanks were during World War I; after that, the rich were as vulnerable as the poor peasants who followed in their wake. We are toasting Wallace, and Scotland in general, with a Highlander, a suitably Scottish blend of Scotch, vermouth and bitters.