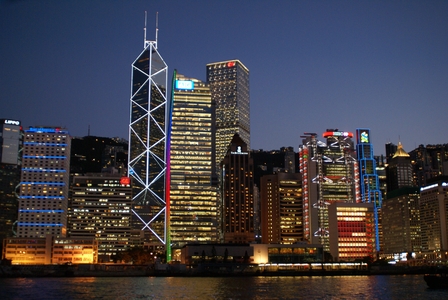 Confusingly, Hong Kong Island is only one small, though central, part of Hong Kong, a cluster of islands and chunk of the mainland in southern, sub-tropical China. Technically part of China, Hong Kong was occupied by the British for over 150 years and the city-state's firmly capitalist heritage and colonial influence make it a very, very different place from its parent nation.

Like Macau, just an hour away by hydrofoil, China classes Hong Kong as a Special Administrative Region and allows it considerable autonomy. Hong Kong may not have a democracy, but it does have its own currency, the Hong Kong dollar, its own stock exchange, its own visa policy and its own official languages (English, Cantonese and Mandarin).

A regional financial hub that's home to more than 80 billionaires, Hong Kong draws a large expat community - particularly Britons - as well as wealthy mainlanders. This is more than enough to support a flourishing bar and restaurant scene, while the transient population means it's hard not to have fun on a night out.

Foxglove
It's hard to fault this stunning space, which transports you instantly into a retro but strangely timeless world. Foxglove's theme is travel, and the main bar, with its low art-deco ceiling panels and golden prop spinning lazily against blue velvet curtains feels like a hybrid of luxury ocean liner and vintage aeroplane. The private dining room, by contrast, feels like a late Victorian train carriage from the glory days of the Orient Express. 5/5
2/F, Printers House, 6 Duddell Street, Central

Lobster Bar & Grill
In the unpromising surroundings of the Island Shangri-La, a luxury hotel accessed from a blindingly white luxury mall, the wood-and-glass entrance to Lobster Bar & Grill really doesn't present much hope of a decent drink. Yet, from the spirits ageing in retired bourbon and sherry casks at one end of the bar to the hoppy, malty custom-created house beer on tap at the other, this bar seriously impresses. 4.5/5
Island Shangri-La, Pacific Place, Supreme Court Road, Central

Maison Eight
Salvatore Calabrese's first Asia opening is the latest in what's becoming quite the empire - and, surprisingly, it's on the Kowloon side of Hong Kong, in Tsim Sha Tsui, no less. The 21st floor space boasts stunning views across Kowloon and the Harbour to Hong Kong island: the topographical map of Victoria Harbour in the bar top pays tribute to it.21/F, 8 Observatory Road, Tsim Sha Tsui, Hong Kong

Stockton
Just up the road from the Foreign Correspondents' Club, Stockton, with its 1890s London theme, is a textbook-perfect hybrid of gentleman's club and speakeasy that's as hard to fault as it's challenging to find. Duck down a narrow alley on a bend in Wyndham Street, and turn left before the blind door at the end: ascend the stairs for whiskey and classic cocktail paradise. 5/5
32 Wyndham Street, Central, Hong Kong

The Pawn
The Pawn, a Hong Kong landmark thanks to its stunning colonial building, reopened in autumn 2014 under the stewardship of British chef Tom Aikens. And, alongside Jason Atherton's Ham and Sherry, that makes two true-Brit Michelin-starred reasons to head to Wan Chai. 4.5/5
62 Johnston Road, Wan Chai, Hong Kong

Ham & Sherry
As anyone who's ever visited one of his many international outposts knows, Jason Atherton - and his bars manager, Gareth Evans - understands the value of a good bar. And this tiny speakeasy style affair, set behind one-way glass out the back of the eponymous Spanish bodega, has style in spades. 4/5
1-7 Ship Street, Wan Chai, Hong Kong

Zuma
After rising quarter of a century of cocktail consumption, I can safely say that Zuma in Hong Kong is the first place I've ever drunk a cocktail from a carnivorous plant. The vase-shaped flower of the pitcher plant may more commonly be used to murder passing insects. But, once thoroughly sterilised, it makes an outstanding cocktail glass, particularly when served with a rattan straw on a box full of underlit crushed ice. 4/5
6/F, Landmark, 15 Queen's Road, Central, Hong Kong

Quinary
From Tastings Group, which brought you Angel's Share (whisky), Origin (gin) and The Envoy (tea, among other things), Quinary has been widely lauded for its cocktail creativity, as well as credited with sparking a cocktail revolution in Hong Kong. The name references the five senses used to experience the drinks, which are well-done variants on this generation of molecular mixology techniques: not just airs, caviars and pearls, but slow-cooking, carbonation, ageing, redistilling and the like. 4/5
56-58 Hollywood Road, Central, Hong Kong

The Woods
A discreet polished concrete entrance leads down to this stylish basement affair, set amid the chaos of Hollywood Road. Skeletal, sculptural trees, decked with lights, pay homage to the name, as do the cut-out screens, woodcut menus and abstract fern forms behind the bar. 4.5/5
L/G, 17 Hollywood Road, Central, Hong Kong

Butler
Over on the Kowloon side of Hong Kong, in a building that's mysteriously occupied almost exclusively by Japanese businesses, Butler is an absolutely delightful Japanese cocktail bar, and quite the reverse of what you'd expect in TST. 4.5/5
5-6/F, Mody House, 30 Mody Road, Tsim Sha Tsui, Hong Kong

Duddell's
This artsy space, over Shanghai Tang in Central, has an oddly Hong Kong Bohemian feel to it. That is to say, it's eclectic without being in the least down-at-heel, combining a ragbag of vintage furniture finds with acres of sheeny-shiny marble. 4/5
3/F, 1 Duddell Street, Central, Hong Kong

The Common Room
Part of club operator Privé Group, The Common Room is a fairly substantial affair that describes itself as a gastrobar majoring on cocktails - although, thanks to that 4am license, there's a lot more drinking than eating happens most nights. 4/5
1/F Wo On Building, Wo On Lane, Lan Kwai Fong, Central, Hong Kong