Our little company has turned 25 years old. So to the drinks brands that sponsor us and all those of you who've subscribed, bought our books, purchased an Easy Jigger or just clicked on our website's pages– MANY THANKS. We wouldn't still be here without your support.

I've worked for Odd Firm of Sin Limited ever since I incorporated it on 6th May 1997, so as it says on my grandfather's 1937 Rolls Royce commemorative service certificate, "twenty-five years faithful and efficient service with the company." Much has changed over those 25 years including the company name. Back in 1997, I didn't have email, let alone a website - I didn't even know what a website was! 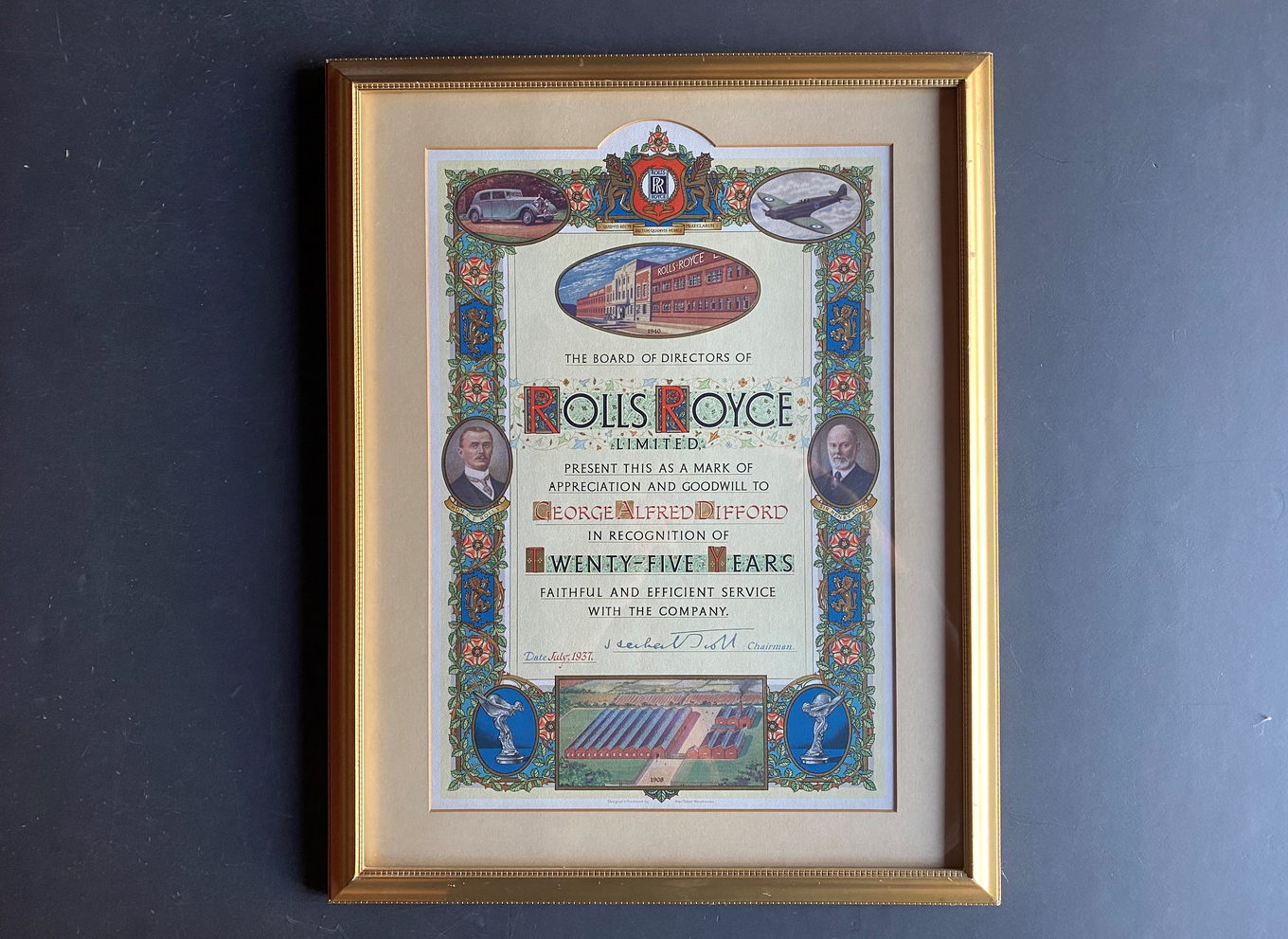 It started with CLASS

I was 32 and had already started and sold a couple of businesses, as well as tried and given up on a couple of others. I'd sold my off-licence (liquor store) and wholesale business specialising in cocktail ingredients and speciality spirits and I wanted to launch a magazine-style catalogue mail-order business specialising in speciality spirits and cocktail ingredients. This was the age before the interweb and the nearest thing to e-commerce was ordering from a catalogue.

I named the company Cocktail, Liqueur And Speciality Spirit Limited after the product areas I intended to cover and with the idea that this would mean I could trade under the acronym CLASS. I set out to launch an annual directory with in-depth information on spirits and liqueurs along with cocktail recipes – an almanac reference work combined with mail/telephone order catalogue. In addition, to cover seasonal specials, new releases and generally update this almanac, between issues, I foresaw a quarterly magazine-style publication.

My wholesale business had been absorbed into Coe Vintners, then one of London's largest and most influential wholesalers, and when I told its owner, John Coe, of my new business idea he offered to come in as 50/50 partner – we invested £50 each for its shares. John, my newly acquired business partner had the names and addresses of his customers which included most of the very best bars in London and starting by targeting his ready-made audience seemed like an opportunity. Hence, CLASS began as a bartender-focused 32-page magazine mailed to John's database via the franking machine in his office.

Over the months and years that followed, through trial and error but mainly by hiring a great team, I learnt how to edit and publish a magazine. Although not a profitable one, as CLASS developed a life of its own as a magazine, John and I (actually mainly John) invested to quickly grow its content and circulation. The growth was so rapid that ideas of a mail-order directory were parked as I was drawn into the all-encompassing cycle of putting together a monthly magazine, and selling the ad space to pay for it. The team grew and with it CLASS. Then I noticed the internet – what an opportunity!

The dot.com boom and crash

With a domain name, a business plan and way too much youthful exuberance, I pitched my original mail-order idea reimagined as an e-commerce website to investment bankers. They loved it. The company's bank account bulged and John and I were relegated to minority shareholders. I had little choice but to embrace what the chairman the bankers appointed told me. "Make a modest profit and this company will be worthless. Lose over £1 million in the next year and I'll make you millions."

We spent the money on agencies with flashy offices who failed to produce very much, let alone a website and when the agency tasked with building our website went bust in the 2001 dot.com crash, so the other shareholders voted to pull the plug and sell my baby, CLASS Magazine.

I managed to persuade the shareholders not to wind up the business and after the sale they allowed me the freedom to build what I could with the little money left; the result being three magazine-style guide books – Sauce Guide to Cocktails, Sauce Guide to Drink & Drinking, and Sauce Guide to Pubs & Bars. We managed to place all three "bookazines" with UK retailers such as WH Smith in time for Christmas 2001. Happily, they sold, so much so that I re-mortgaged my flat to inject more funds and Dan and I (he's still our art director) settled into publishing annual books with the occasional book as a contract job for various drinks brands to help my quest for profitability.

"Were you on the 'sauce' last night?" is a classic British way of saying 'it looks like you had a big night'. This and our books being a 'source' of information inspired the name Sauce Guides, a name I trademarked around the world, including in the USA. However, soon after our books and new quarterly magazines went on sale in Barnes & Noble and Borders stores in America, I received a Cease and Desist from lawyers representing Sauce Magazine, as in the US it's not who owns a trademark but who uses a name first that counts. We had a book at press so I quickly had to choose a new name and the trademark attorney who'd cost me so much said, given the urgency, my own surname was the safest way forwards. Hence, we became Difford's Guide.

Meanwhile the bankers still owned most of the company, yet no longer cared what happened to it. Their shares changed hands a couple of times and I ended up with Rob Cooper, who I knew via his family's Chambord liqueur, as the majority shareholder. I was still under the service agreement contract the bankers had drawn up so Rob's purchase meant he pretty much also owned me.

Rob stopped us publishing and set me to work helping create and launch St-Germain liqueur. Dan and I were joined by Hannah Sharman-Cox who was originally just helping out for a couple of weeks but became one of the driving forces behind the brand.

After 28 consumer shows and a life on the road promoting and getting Rob's liqueur listed by retailers and bar owners, he and I had a heated discussion in a New York bar. I had a letter of intent from him promising me 10% of the brand. He had my service agreement. This resulted in him lending me the money to buy his shares in what was then called Sauce Guides Limited. I was free! Thanks to an investment by Sukinder and Raj of The Whisky Exchange I was then able to repay Rob.

I hadn't given up on the internet and over the years I'd engaged different agencies to build a website, but despite blowing my precious little funds, they failed to produce anything like the website I desired. Eventually, after advice, I concluded we needed an in-house development team and thankfully this led to Harry, our genius IT director who with Matt and Alex has built an A-team. The result is what you see today, one of the world's leading drinks websites.

After experiencing Bar Convent I was travelling back from another week in New Orleans for Tales of the Cocktail with Hannah and it struck me that Berlin and New Orleans both had cocktail festivals but London didn't. I think it was in Heathrow that I said we should start London Cocktail Week. Every year the festival came around I thought it would be a disaster and bankrupt me. Thanks to Hannah and Siobhan it was always a huge success but it distracted from Difford's Guide and happily Sukinder and Raj took London Cocktail Week into their events business along with the team who make it happen.

Bartending has changed little in 200 years but publishing has experienced dramatic changes over the past 25 years – firstly with the digitisation of photography and print and latterly online publishing.

Some of the over 5,000 cocktail photographs you still see on Difford's Guide were shot over 20 years ago, pre-digital photography, on medium-format transparencies. Not able to see the images as we shot them we had to bracket exposures with multiple shots of the same cocktail and I had to keep records such as "roll 1, No. 1-4 = Cosmopolitan". After frantic weeks producing next month's magazine, I used to collect the four-part colour separation films from the repro house and drive them to the printers.

Keeping up with new technology is expensive and being left behind can be terminal. Thankfully, I've had help from others, including my Mum and Dad who have both invested their savings, partly persuaded by Paloma, the love of my life who gave up her brilliant corporate career to become managing director of Odd Firm of Sin Ltd, the name I gave our company after acquiring Rob's shares.

Odd Firm of Sin is an acronym of my name, something I only discovered when using an acronym generating website in the quest for an alternative brand name to St-Germain thanks to worries over trademarking the name of a football team and area of Paris.

I love the community of "Discerning Drinkers" that has grown out of Difford's Guide and we want to offer even more cocktail information and functionality, and expand our coverage of wine and beer. The pandemic also persuaded me to become a shopkeeper again and we've ambitions to build on our fledgling online shop. All this requires investment.

I've re-mortgaged my home numerous times to invest in this business but now I'm selling it. Hence, the bar known as the Cabinet Room in the living room of my London flat is up for sale. So if you'd like to buy a flat complete with a 4.5-metre long professional bar you'll greatly help me set Difford's Guide up for its next 25 years.

Many thanks to the dozens of people who have worked for and contributed to the company and adventures such as Class Magazine, Cocktails Made Easy, and London Cocktail Week over the past 25 years. And particular thanks to the brands that have and continue to support Difford's Guide.

Lastly, thanks for reading this and the countless thousands of words I've written over those years. And I still can't spell.