Airport Bars: why are they so bad? 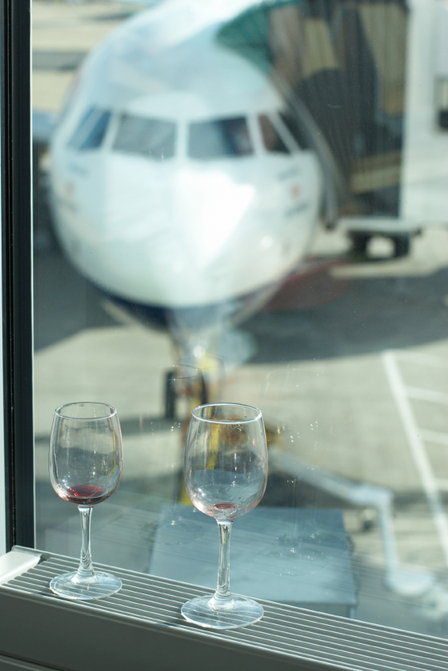 Once upon a time, before it became mundane, air travel was the most aspirational activity imaginable. Stewardesses were the supermodels of their day, passengers dressed up before they took off, and airlines created lavish interiors with silver service dining and cabaret-style lounges complete with grand pianos. It was a golden age and it was all about glamour.

Amid today's budget airlines, lengthy check-ins and endless queues, flying has long shed any allure that it may once have held, and with the exception of a handful of airlines and airports the ability to get a good drink on the ground or in the air has disappeared faster than a passenger who makes a joke about bombs in his luggage.

Exactly why this is so was the subject of a seminar at this year's Tales of the Cocktail by Jacob Briars, Bacardi's head of education, and Charlotte Voisey, Portfolio Ambassador for William Grant & Sons USA, both seasoned travellers. Inspired by the growing availability of craft cocktails practically everywhere but the world of aviation, they sought to discover how airport bars have got so bad and whether there are steps cocktail-thirsty passengers can take to improve their airside imbibing experience.

"There are 90,000 flights every day in the US alone, and looking internationally there are plenty of huge and phenomenally busy hubs where you might expect to find a decent cocktail bar, especially as the overall shopping experience in many airports has improved so much," says Jacob. Not so, though. "I guess there's less of a commercial imperative for liquor brands to create great bars if they're happy people are already buying duty free. Most airport bars go through a lot of liquor, even if ideally they'd like standards to be higher."

So why is it so difficult to a decent Aviation in the world of aviation? Jacob and Charlotte explained why.

Too far from anywhere

Many hub airports are far from the metropoles they serve, meaning there's little incentive for decent bartenders to schlep all the way from town to work, and post 9/11 security checks might mean any one who has had even a minor brush with the law may not pass background checks. Add in to that that airport bartenders don't get paid as much as their big city counterparts and there's little draw for leading cocktail talent.

From Coffee to Caipirinhas

The airport bartender is charged not just with making everything from coffee to cocktails but with setting up and breaking down the bar every day. Bar-backs? Don't make me laugh. International travel and skewed time zones mean they have to make coffee and cocktails simultaneously to cater just as much for passengers who have got up early to make that all-important flight and those who have been flying all night and are craving a Manhattan even though it's 7am local. Problem is, they probably haven't been trained in either. Did someone say 'jack of all trades?'

Passengers make decisions differently when they're in an airport. Anxious about missing flights, they are unlikely to stray more than 4-5 gates away, and happy to patronise the nearest low quality diner or bar than make an informed decision about a particular venue. In short, they're less demanding and willing to put up with less than they would were they frequenting their usual bar.

Most airport bars tend to be run by giant contract operators, who are concerned more with volume than adopting an independent and artisan mentality for customers they likely won't see again. It makes for a weird back-bar selection that ranges from cheap tequilas to bizarre numbers of high-end products, but few ingredients in between with which to make cocktails. Except for wildly expired vermouth, bottled Margarita mix or powdered sour mix. And because they're selling volume, they're not so concerned with training staff - it's a vicious circle. And because they may have been contracted by the airlines themselves, if the airline is in financial difficulty, then they'll put further pressure on their contractors to cut costs.

Exceptions to the rule

There are exceptions to the rule, where airports have taken culinary trends to heart, with Queenstown Airport in New Zealand boasting a bar with a phenomenal wine list, and nearby Wellington with three independent coffee shops; Copenhagen has a large restaurant that heroes local aquavit. But most of the time airports pay little attention to their local produce - Scottish airports might sell bottles of duty free whisky but don't have a decent whisky bar among them, you won't get a good Margarita in Mexico, and if you think Singapore's Changi Airport boasts a fabulous place for Slings, think again.

1. Once you've checked-in your luggage, check in your expectations too: you are not going to find a decent Last Word or Corpse Reviver in the departure lounge or see bartenders employing a Japanese hard shake.
2. Look on the back-bar to see what you're dealing with. Try and identify three-ingredient drinks that are easy for your (likely) untrained bartender - you should be able to spot the ingredients for a Manhattan, Negroni or an Americano. Don't get precious about the orange slice garnish.
3. Chat to the bartender to assess their familiarity with cocktails. If they are more used to pulling pints and serving spirits neat, spend a bit of time talking through what you want.
4. Opt for built drinks rather than anything that requires shaking, stirring or rolling.
5. Other drinks you should be able to make with minimal fuss: a Champagne cocktail or a St Germain cocktail (with white wine and soda) should be achievable; if you can see the ingredients for a Bloody Mary, don't forget about the Michelada; an Irish coffee is arguably the ultimate airport cocktail - it was developed at an Irish airport; Cuba Libre - all you need is Bacardi, lime, Angostura bitters and Coke.

1. You might be six miles up but make sure your expectations aren't sky high: cabin crew probably haven't been trained in cocktails and have even less time than bartenders on the ground. Don't believe us? Try pressing that call bell, asking for an Old Fashioned and seeing the look you get.
2. There are probably even fewer facilities on board for making cocktails than in the most sorry airport bar. Even airlines that employ bartenders for their business class passengers from time to time (Virgin Atlantic or Air New Zealand, say) don't tend to provide ice or sinks, and the bartenders have to clear their own stock through customs. So stick to simple spirit/mixer combos, Micheladas, whisky and mineral water or the uniquitous Bloody Mary.
3. Alternatively, take your own ingredients, like sugar syrup, small bottles of Angostura Bitters and Orange bitters (remember all bottles must be below 100ml) and your favourite olives and make your own Old Fashioned, Champagne Cocktail etc. Remember you cannot open any alcohol you have bought in Duty Free.
4. Remember 25-30% of your senses will be dulled by pressure and altitude, so go for punchy flavours - that's why the umami-rich Bloody Mary works and why so many people suddenly drink ginger ale at altitude.
5. Don't drink too much - alcohol has more than double the effect at sea level. That free glass of champagne is particularly dehydrating, and no one likes a drunken idiot at 36,000 feet.