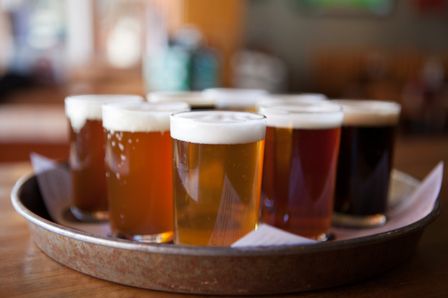 London has a newly invigorated beer scene thanks to many microbreweries throwing open their doors and inspiring a new generation of drinkers. With this in mind the following list comprises bars and pubs which specialise in beer, offering a large and varied range.

The Birdcage
As every Londoner knows, Columbia Road is famous for its Sunday morning flower market and the Birdcage is prominently positioned corner pub which marks where the market begins proper. Since 2014 this 18 century east boozer has been part of the Draft House chain so offers an impressive selection of traditional cask, imported and craft brews. And befits its location pie & mash is served with mushy pies and green liquor.
80 Columbia Road (corner Gosset St), Bethnal Green, E2 7QB 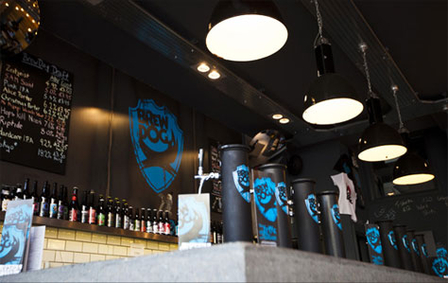 BrewDog
A growing empire of craft beer pubs, we think there's nothing wrong with a successful business plan so just because there is more than one BrewDog, the beer is still craft and the selection incredible. No usual suspects here - by which we mean no mass-produced, weak-in-flavour fizzy beers served from refrigerated fonts - but flavourful, exciting and sometimes challenging flavours and styles, with plenty on draught. Choose from BrewDog's own range that includes the fruity pale ale Trashy Blonde 5am Saint red ale which includes five types of malts and seven types of hops. The bars aren't shy of championing other craft breweries' products either, and shares its fridges and cellars with Stone, Three Floyd's, Mikkeller, Struise, Nogne, O, Alesmith, The Bruery and De Dolle.
Camden: 113 Bayham Street, NW1 0AG
Shoreditch: 51-55 Bethnal Green Road, E1 6LA
Shepherds Bush: 15-19 Goldhawk Road, W12 8QQ 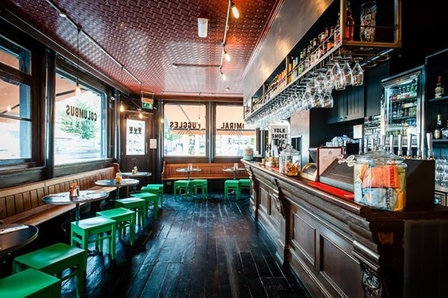 Draft House
A chain of old boozers dragged into the modern day, the draught selection at Draft House includes locally brewed ales from Meantime as well as casks shipped in from as far afield as San Francisco. Bottled brews come from just about everywhere and the staff strive to serve your choice in its appropriate glass. Non beer drinkers (strange folk) have a choice of wines by the glass and a good range of whiskies. Food tends towards huge servings of comfort food as pub grub should be.
City: 14 - 15 Seething Lane, EC3N 4AX
Tower Bridge: 206-208 Tower Bridge Road, SE1 2UP
Battersea: 74-76 Battersea Bridge Road, SW11 3AG
Clapham: 94 Northcote Road, SW11 6QW
Central: 43 Goodge Street, W1T 1TA 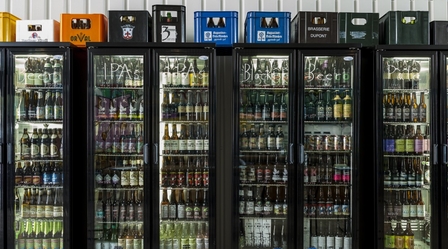 Mother Kelley's
Mother Kelly's Bottle Shop and Tap Room is a New York inspired beer bar in Bethnal Green, inside the burgeoning arch ways on Paradise Row. It's actually a sister site to Simon the Tanner (SE1) and the Queen's Head (WC1X) but we think the group have hit the spot perfectly with this east end tap room. Beer is the main focus with 19 out of 23 taps devoted to the stuff and 6 massive fridges bulging at the seams with pretty much every style of beer you can imagine from all over the world. Best of all? You can take the stuff away as well.
251 Paradise Row, E2 9LE 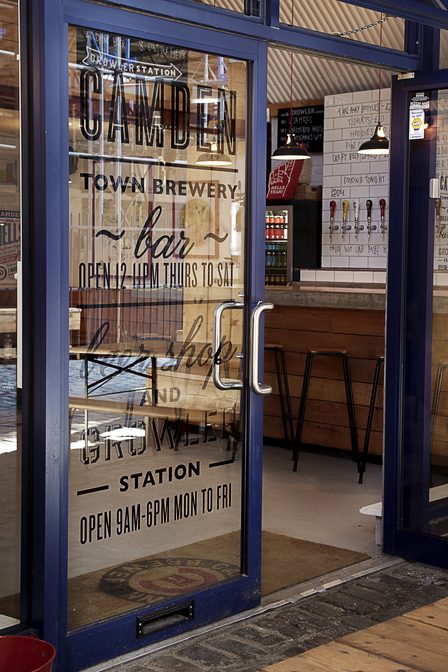 Camden Town Brewery
This brewery bar is a small beer hall tucked under the rail arches of Kentish Town West station. A selection of keg beers ranging from wheat brews to pale malts and dark ales are all brewed on site and a small range of spirits and wine is also available. Written on tiles behind the bar are the names of brews - to help with the extensive choice a blackboard lists all the various grains and hops that go into each. A chilled vibe means beanies, hoodies and trainers are welcome. Intrigued by the brewery process? Tours kick off at 6pm on Thursdays - book ahead. Overall a fairly understated bar but certainly one that wins points for its product. And there's no guilt about food miles whatsoever.
55-59 Wilkin Street Mews, NW5 3NN

The Dovetail
Hidden up a narrow alley off Clerkenwell's Charterhouse Square, the Dovetail's interior is basic. Its slate floor, wooden tables, gothic chairs and reclaimed pews herald the appropriately monastic beer theme. The 100 strong list of beers is focuses on Belgian: 14 are available on draught. 3.5/5
9-10 Jerusalem Passage, Clerkenwell, EC1V 4JP 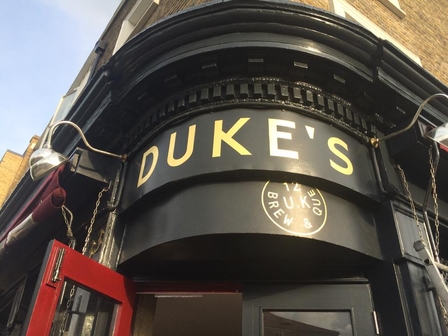 Duke's Brew & Que
A two-minute stroll from Haggerston station, the home of Beavertown Brewery, Duke's Brew & Que is located on a rather bleak road but inside it's a friendly and eccentric jumble of wooden tables, worn chairs and creepy looking toys and a kitchen with a tiny brewing production line. In the fridge there is also a variety of British or American bottled beer from fellow microbreweries. Food is sublime, and the service is spot on.
33 Downham Road, De Beauvoir Town, N1 5AA 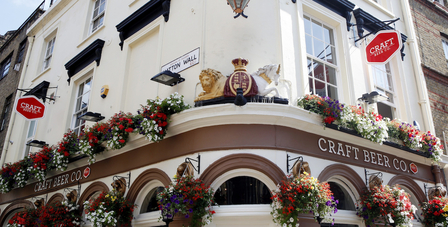 Craft Beer Co
Each of the Craft Co pubs many be different, with an individual character and look, but they all function as the best of old school British pubs values alongside the great modern standards of service. The Clerkenwell branch boasts to most taps - but all have an astonishing number of draught beers and a great selection of bottled as well. In total the group has 6 pubs, 127 keg taps and 104 cask ales.
Clerkenwell: 82 Leather Lane, EC1N 7TR
Brixton: 11-13 Brixton Station Road, SW9 8PA
Islington: 55 White Lion Street, N1 9PP
Clapham: 128 Clapham Manor Street, SW4 6ED
Covent Garden: 168 High Holborn, WC1V 7AA 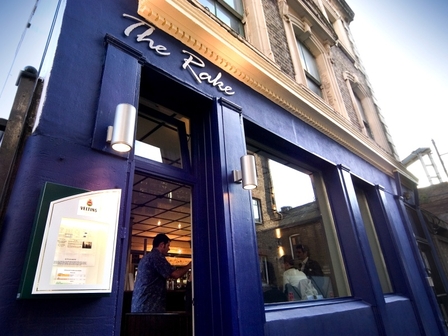 The Rake
It's tiny, has beer-crazed graffiti on the walls and piss poor toilets. The Rake is hardly upmarket, but as the sign over the bar says: "There's no crap on tap". The Rake is hidden on a back street behind Borough Market in the shadows of Vinopolis and is run by the folk behind the Utobeer market stall. At a mere 13 feet long and seven feet wide, with a crammed-in capacity of just 44, the Rake is in contention for London's smallest bar. Typically the fridges behind the bar have 130 beers in them at any one time, as well as ciders, wines and soft drinks and there's more beer downstairs. Their draught beer range is in a constant state of change too with 7 keg pumps and 3 cask ale handpulls. Because of this they do not have a single permanent product on the bar which keeps things interesting.
14 Winchester Walk, Bourough Market, SE1 9AG

Jolly Butchers
The Jolly Butchers might bear a classic British pub name, but step inside the door, pass through the curtain and you're in a north London interpretation of what appears to be a European beer hall - actually an ale and cider house. Closely packed in tables in the open room see fashionable late 20-somethings/mid-30s gather to sample from a huge international beer selection. From behind a long bar that runs practically the width of the room is a wondrous choice of real ales, craft beers, stouts, lagers and ciders on draught.
204 Stoke Newington High St, N16 7HU

The White Horse
An old coaching inn on the tip of Parson's Green with a large umbrella covered terrace. Big and loud but distinctly upmarket boozer. If you are a rugby or beer fan then this pub, known to its regulars as the Sloany Pony is the kinda of pub you'll be sure to like. Highly regarded for its broad beer selection (6 to 8 cask ales + 135 bottled brews), the White Horse also deserves praise for its hearty food.4/5
1-3 Parsons Green, (north corner of green), Parsons Green, SW6 4UL

Also worth checking out