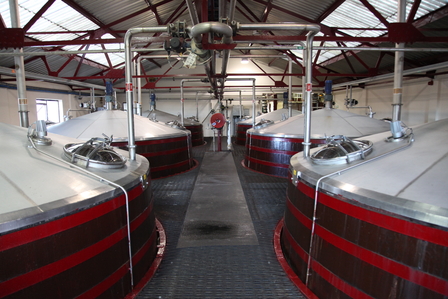 During fermentation, yeast converts the fermentable sugars in the wort into alcohol to produce a beer-like liquid called wash. Fermentation is the stage during the whisky making process when alcohol is produced. (The distillation process which follows merely concentrates that alcohol.) The speed at which the fermentation takes place greatly affects the flavour of the wash and so the finished whisky.

The optimum temperature for the standard cultured distiller's yeast used by most Scotch whisky distillers to convert the fermentable sugars in the wort into alcohol is 34°C and this is known as the 'peak temperature'. It is crucial not to exceed this as the yeast will be killed by temperatures above 35°C, hence the wort from the mashings is cooled to is 34°C in a heat exchanger before being mixed with liquid yeast and pumped into a fermenting vat known as a 'washback'.

The early mixing of yeast with the wort helps prevent infection from bacteria and other micro-organisms. Fermentation begins almost immediately as the yeast converts the sugary wort into crude alcohol, producing a liquid similar in aroma and taste to sour beer. The fermentation process typically lasts 48-60 hours and the beer produced, which has a strength of 7% to 8% alc./vol., is known as 'wash'. It used to be common for distillery workers to filter the yeast out of this liquid to make a beer-drink they called 'Joe'.

Traditionally washbacks were made of European larch wood, Douglas fir or American Oregon pine due to the wood having a tight grain, being knot-free and available in long planks. Today, most new washbacks are made of stainless steel and there is much debate over the advantages of traditional wooden washbacks over stainless steel.

Wood advocates claim an insulating affect and when first filled, even after a period when the distillery has been closed, wood presents a warm surface unlike cold stainless steel. More importantly, pores in wood harbour micro fauna and microbes which can add to the fermentation. Unlike yeast, bacteria survive the heat of fermentation to contribute subtle flavours to the wash. Advocates of wood say it even produces a sweeter wash.

However, stainless steel is quicker to clean and requires less maintenance so is more efficient. Supporters say that steel can also harbour microbes - just don't clean it as thoroughly. At the end of the day no one can deny that wood looks better.

Much of a whisky's flavour is created during fermentation and the amount of yeast used, length of time, temperature and the gravity greatly impacts the wash. 'Gravity' refers to the amount of malt added in the first place. A low gravity has more water and less grain, while a high gravity has a higher ratio of grain to water. Using half the volume of yeast will mean the fermentation takes twice as long.

A high gravity means a more concentrated wash with less liquid to distill, less to heat up so reducing energy consumption. However, alcohol yield per tonne of malt will be reduced with high gravity fermentations as the wort becomes too strong for the yeast to break all the sugars down.

A fermentation lasting 50 hours is considered short and a 60 to 75 hour fermentation average, while 75 to 120 hours is a long fermentation. After 48 to 50 hours the yeast will have made alcohol and when distilled the resulting spirit will tend to have a cereal taste. Fermentations lasting longer than 60 hours take advantage of the yeasts dormant resting period when it produces new flavours resulting in a more complex spirit.

Longer fermentations (over 55 to 60 hours with standard distiller's yeast) produce little or no more alcohol, but the longer the fermentation the more flavour that is likely to be generated. Longer fermentations also tend to produce a wash that's easier to distill as they have less of a tendency to foam (see distillation).

At its height the amount of carbon dioxide generated by fermentation produces a significant amount of foam and most distilleries have 'switcher blades' spinning around the top of their washbacks which repeatedly knock the top of the foam and prevent the fermenting wort from coming over the side of the washback. Emergency anti-foamer is usually also sighted nearby for adding in emergencies. 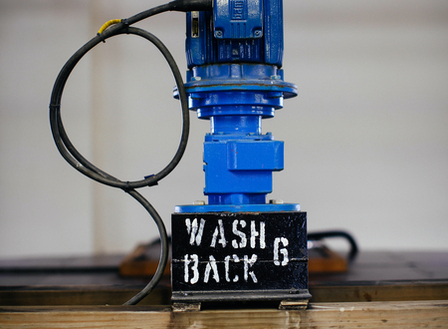 Switcher blade motor atop wash back No.6 at Graigellachie

From 1952 until 2003, all Scottish whisky distillers were obliged by the Scotch Whisky Association to use the same yeast strain (DCL M-strain), a yeast originally hybridized from Saccharomyces cerevisiae and Saccharomyces diastaticus during 1930s-50s by what we know today as Diageo for its ability to break down maltose sugars, for being good at making alcohol and producing the flavours associated with Scotch whisky.

Distiller's M-strain yeast is still favoured by many Scotch whisky distillers, although other newer strains such Mx, Mauri and Anchor/Bfp are also widely used.

Distiller's yeast is available in liquid 'cream', pressed semi-dry and dried forms. Liquid yeast is cheaper and easier to handle but dies after only a few weeks, while dried yeast can be stored for years. Most distillers prefer to use liquid yeast but keep stocks of dried yeast as a backup. Few, if any, Scotch whisky distillers propagate their own cultures.

Yeast cells move around within the washback during fermentation due to secreting carbon dioxide as the yeast makes alcohol in such a way that the ejected gas acts like a jet propulsion system to keep the cells on the move. The yeast used by distillers is similar if not the same as brewer's ale yeast, known as top flocculating yeast due to its floating to the surface when spent rather than sinking to the bottom of the fermentation vessel.

Second-hand beer brewer's yeast although very messy to handle is used by a few distillers due to its low cost and high acidity which increases beneficial copper reaction during distillation. 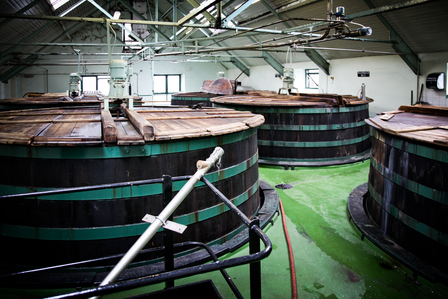 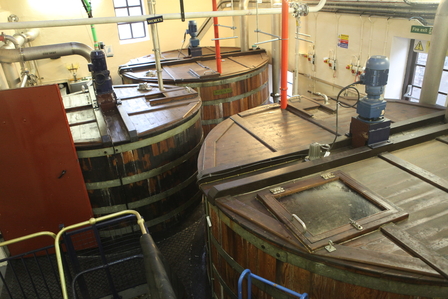 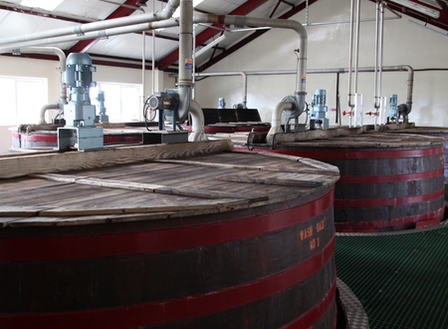 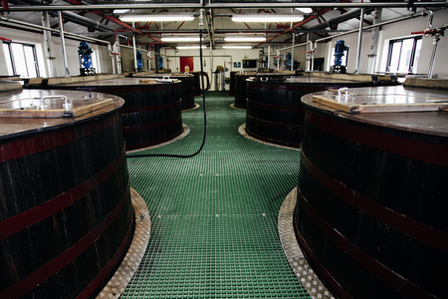 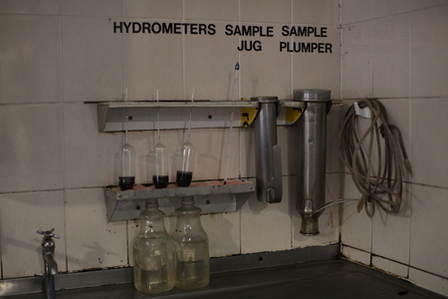