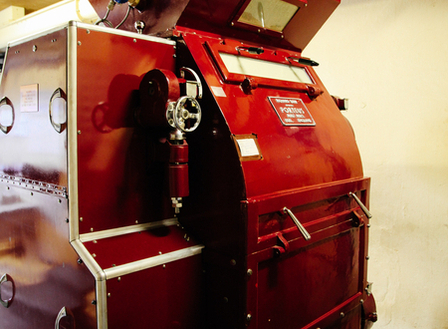 After malting, the malted barley, which is as crispy as well-done toast, is milled into powder known as ‘grist’. The consistency of this grist is crucial to the extraction of fermentable sugars during the next stage – mashing.

Before entering the mill the grain first passes over vibrating screens to separate and remove stones and other foreign bodies which could damage the mill.

Inside the mill, two sets of rollers crush the grain - the first pair of rollers crack open the grains then the second pair, which are adjustable, grind the grist to the consistency best suited to a distillery's mash tun. The consistency of the grist is assessed by separating and measuring the three component parts of the grist. The optimum consistency for most distillers is 20% husk (coarse) 70% grits/heart/middles (medium) and 10% flour (fine). However, some prefer 15% husks, 80% grits and 5% flour.

Roller setting on a Porteus mill

It is important that the consistency of the grist is correct for maximum extraction of fermentable sugars during the mashing process. If the grist has been milled too finely, then water will not pick up soluble sugars, while if it is too coarse the water will run though.

The consistency of the grist is tested using a wooden shuttle box within which are three layers separated by two sieves, each with progressively finer mesh. Grist is placed on the top layer of the box with the largest mesh base, the box is closed and shaken from side-to-side - hence the name 'shuttle box'. When the box is opened the husks will be trapped on the top layer, grits in the middle layer and flour on the bottom of the box. Each part is then weighed and the percentage consistency calculated. The mill rollers will then be adjusted accordingly to produce finer or courser grist. 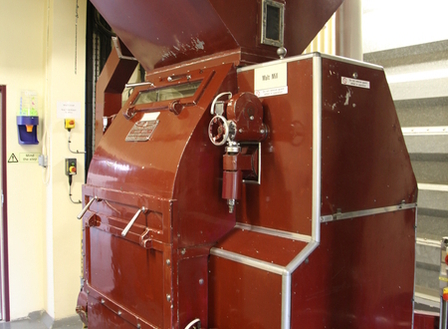