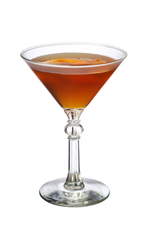 On this day in 1967, Bolivian paramilitaries, working with the CIA, executed Che Guevara, and spawned a thousand T-shirts.

Although famed and demonised in equal measure for his role in the Cuban revolution, Ernesto Guevara was, in fact, not Cuban but Argentinian. He was a medical student when he set out on an epic road trip across Latin America, which he would immortalise in his book The Motorcycle Diaries. The injustices he witnessed on his travels - from lepers to exploited workers - left him believing that violent revolution was the only way forward.

More than half a century on, Che is still a hero to many - Cuban schoolchildren promise to be like him - and a demon to others. His portrait, shot by Alberto Korda and transformed by the artist Jim Fitzpatrick, remains one of the most reproduced images of all time. We are marking today with a Cuban Liberal, a beautifully balanced classic cocktail that comes courtesy of Havana's Floridita. Or you may feel a Che's Revolution is more apt.

Tallest dam in the world disaster

For decades, Italian politicians, press and public had been in love with the idea of the Vajont Dam. It would be the tallest dam of its kind in the world, a miracle of Italian engineering, bringing hydropower, irrigation and clean water to towns and villages around the area.

And so, at 10.39pm on this day in 1963, 260 million cubic metres of trees, rock and soil roared into the dam reservoir at over 100kph. Within 45 seconds, a 250m wave had rolled over the top of the dam, and was tearing down the narrow gorge, wiping out almost everything in its path, including five villages and at least 2,000 people.

Today, Vajont is considered an emblematic environmental disaster, a sign of what happens when humans don't work with nature but against it. We are marking the occasion with a New Amsterdam, our take on a drink created by Jim Meehan at PDT.