Padre Azul is also distinguished as it's the only tequila made by Erika. Hence, while several brands originate from Tres Mujeres, Padre Azul is made from its own agave using its own processes and equipment to produce unique tequila.

Having spent a morning with Erika at Tres Mujeres to learn about Padre Azul, I was struck by how my questions surrounding brix, specific gravity, monitoring alcohol and temperature cut points were answered by smell and taste rather than by numbers and statistics. Padre Azul is a tequila made using experience rather than the strict application of science, in some ways nearer to artisanal mezcal than large-scale commercial tequila production. 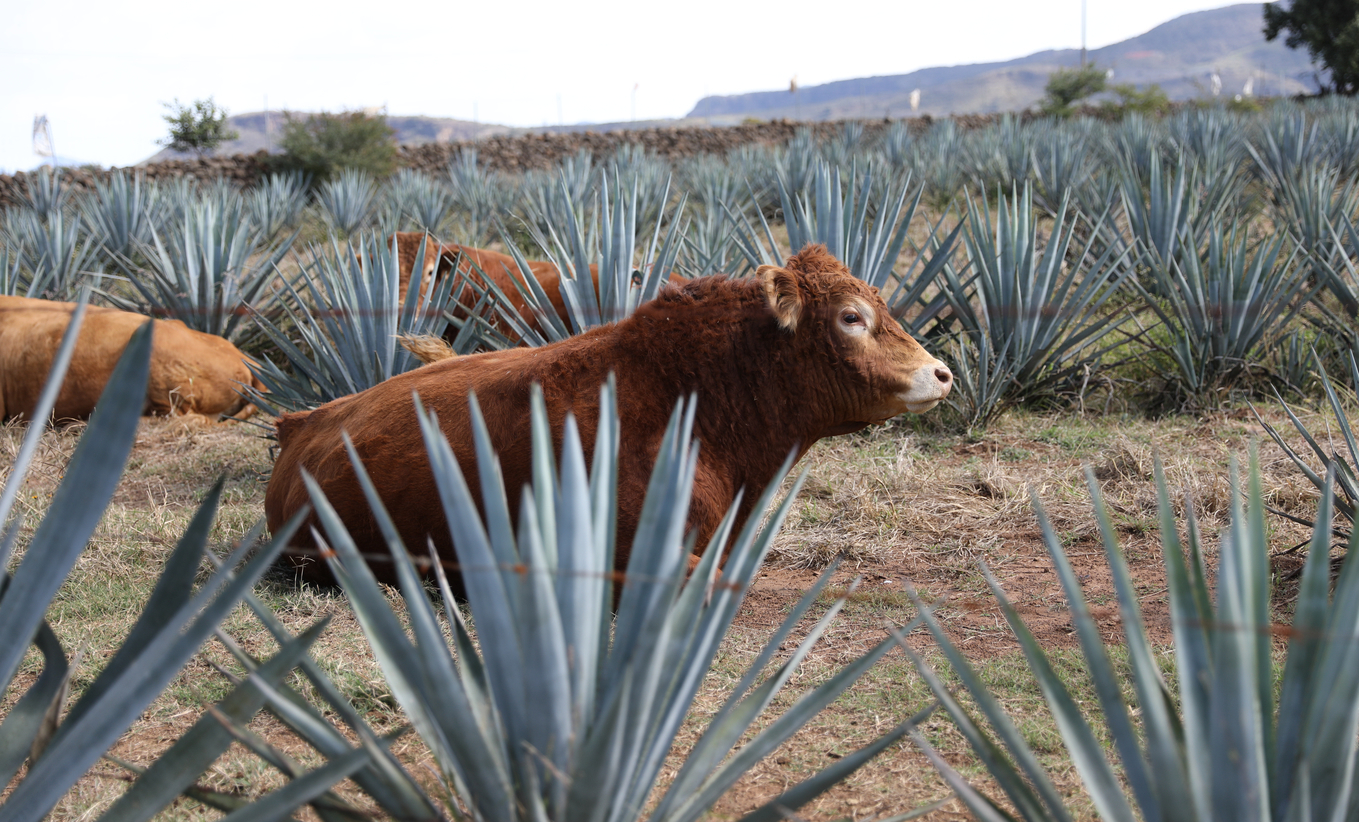 Neighbours in the field next to the distillery

All the agave used to make Padre Azul is grown in the Amatitán Valley where the soil is more alkaline, contains less iron and more basalt than the highlands. The agave are grown and harvested under long-term contracts with neighbouring farmers to ensure a consistent supply of locally grown piña which Erika says, due to the soil and microclimate, imparts a distinctive vanilla and pineapple note to the tequila and this is key to Padre Azul's distinctive flavour.

Harvesting the agave at their peak ripeness, achieved at between 8 to 10 years, is also essential to obtaining the desired organoleptic characteristics in each batch of Padre Azul. 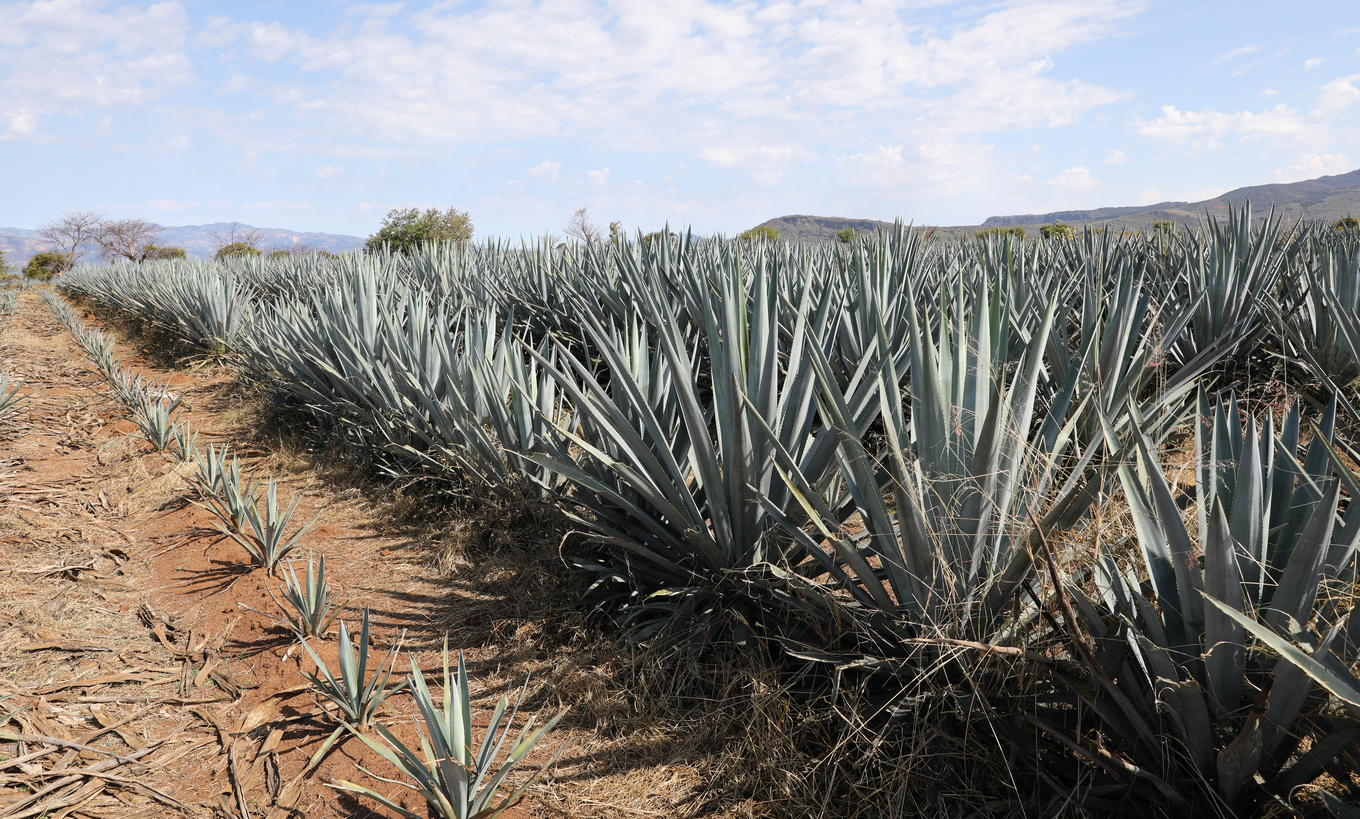 Padre Azul's vanilla aroma and flavour are so pronounced that I questioned Erika as to how this is achieved soon after meeting her. She explained, "Yes a lot I know, but really the plants have a vanilla component, and the important reason is when we cook exactly, we have this note, we conserve this because it comes from the agave."

Still disbelieving, I reiterated, "Just to understand, you're not adding any vanilla?" To which Erika affirmed, "No, no, no", with Kim Albarrán (one of the brand's founders) adding, "No...There's no preservatives, no sugar, no yeast. It ferments naturally."

And just to be sure, I asked, "So, can we say the finished product has no additives, no sugar, no caramel?" Erika assured me, "No nothing, only work...it's only the work to make...it really is the process here, the smell, taking care, it's the most important."

The large pineapple-like core of the agave plants, piña, are chopped into four pieces and hand-staked in a traditional masonry (mampostería) oven. There are three such ovens at Tres Mujeres but Padre Azul only use oven No.3 (horno tres) which has 15-tonne capacity. 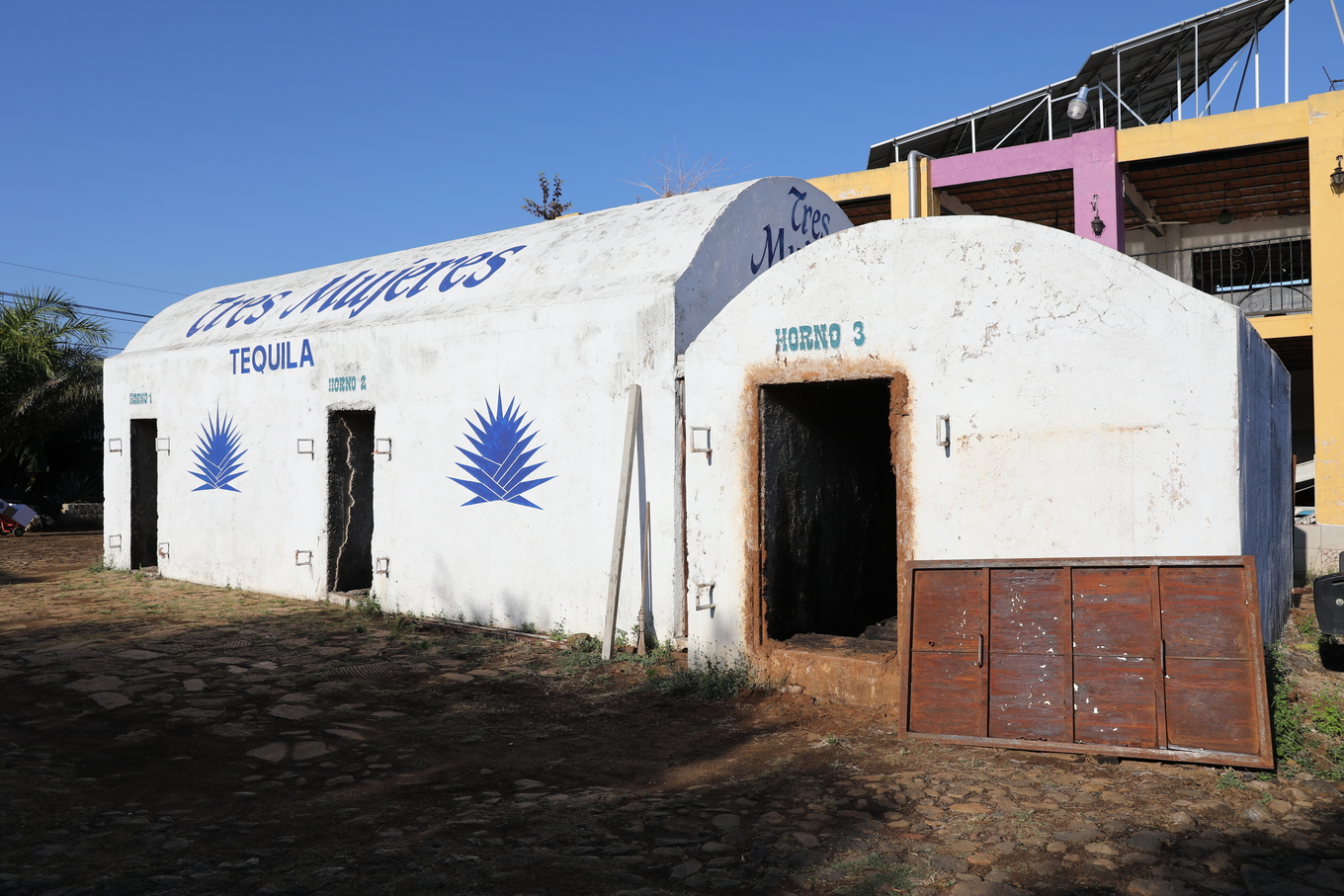 The steel doors are barred closed and sealed to prevent them from bursting under pressure before steam is pumped into the oven. Erika varies her cooking time to account for the weather, but steam is applied for a minimum cook of 24 hours. This is more than twice the time it would take using a more modern autoclave but like using a pressure cooker versus a clay pot, slow cooking produces more flavour.

As the piña slowly bake, sweet juice starts to flow from channels in the base of the oven, the initial flow is discarded as this cleans the channels for the precious agave honey that will be added to the more dilute juice produced by the roller mill during the next stage.

Erika explained that for her the smell of the agave roasting in the oven "is very important, you smell and the agaves cook or not completely cook but this is an important time for me. When you make something in the kitchen, you smell, it's cooking or not cooked. I need to be here always..." Kim Albarrán added, "That's why a lot of people say our blanco has a little bit of smokiness to it, it's not barrel-ageing that imparts the smoke but cooking it for up to 48 hours, the smoke stays with it."

When Erika judges it's time to turn the steam off, the roast piña are left in the oven to slowly cool for a further 24 hours resting period, so the total cooking time is usually around 48 hours.

The roasted piña are unloaded from the oven by hand and transported the short distance to the four-stage roller mill where they are crushed and plant's fibres sprayed with well-water to wash the precious sweet juice from its fibres. 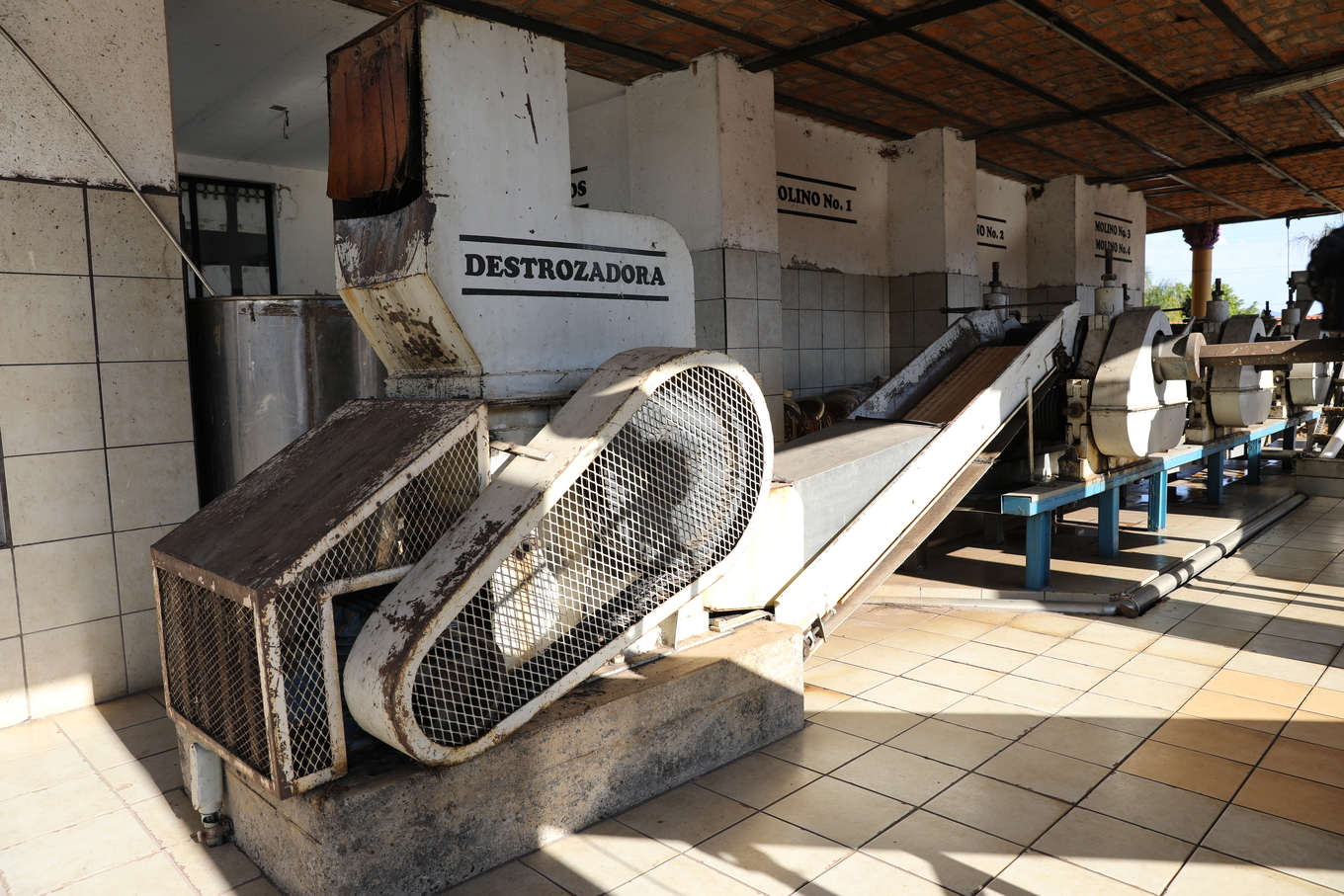 This stage of the process not only extracts the sugars from the plant needed for fermentation but also introduces another key local ingredient that influences the flavour of Padre Azul, water drawn from the distillery's own well. 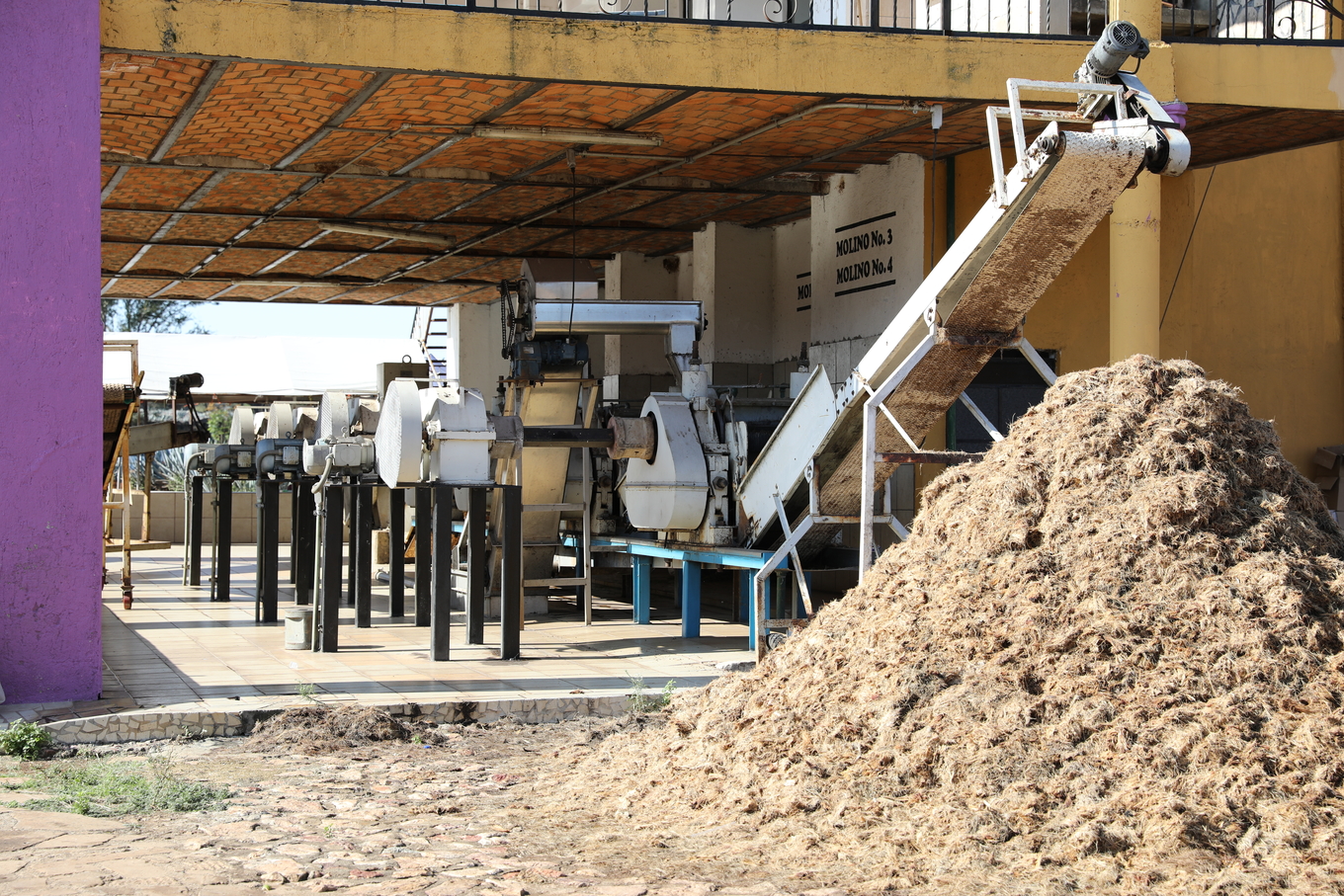 Due to relying only on natural airborne yeast, fermentation is another process where Erika harnesses the unique local environment to influence the character of her tequila. "We use only the land, the microorganisms from the land, we don't use yeast... For this reason, our flavour has this character. Always a nod to the area." 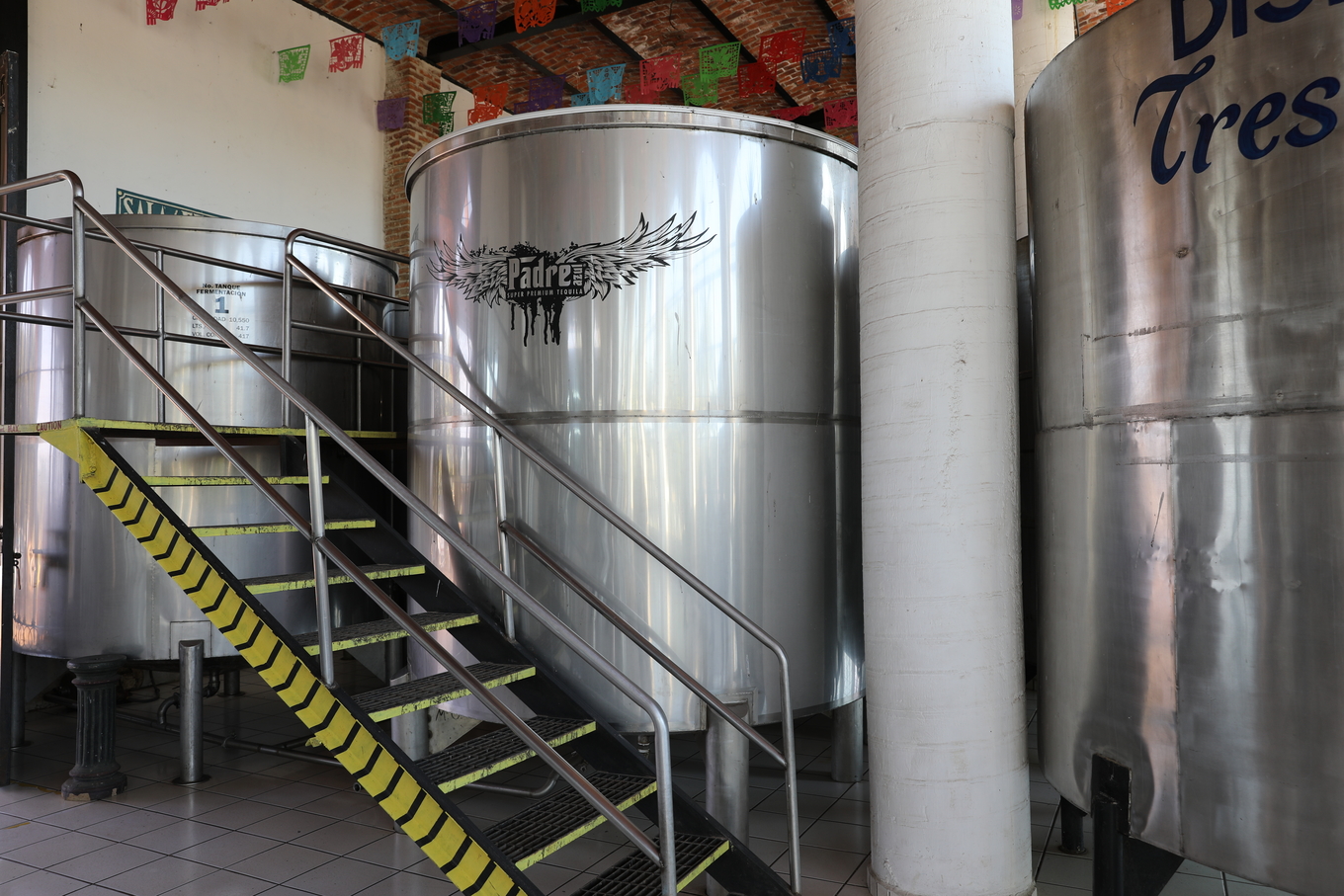 The use of natural yeast and room temperature (unheated/un-chilled) mean that fermentation times vary massively with seasonal climatic temperatures contributing to fermentation lasting three to four days and occasionally as long as seven days. The fermented agave juice, mosto, is pumped from the 10,550-litre stainless-steel open-topped fermenters across the room to still No.4 for the first of two distillations. 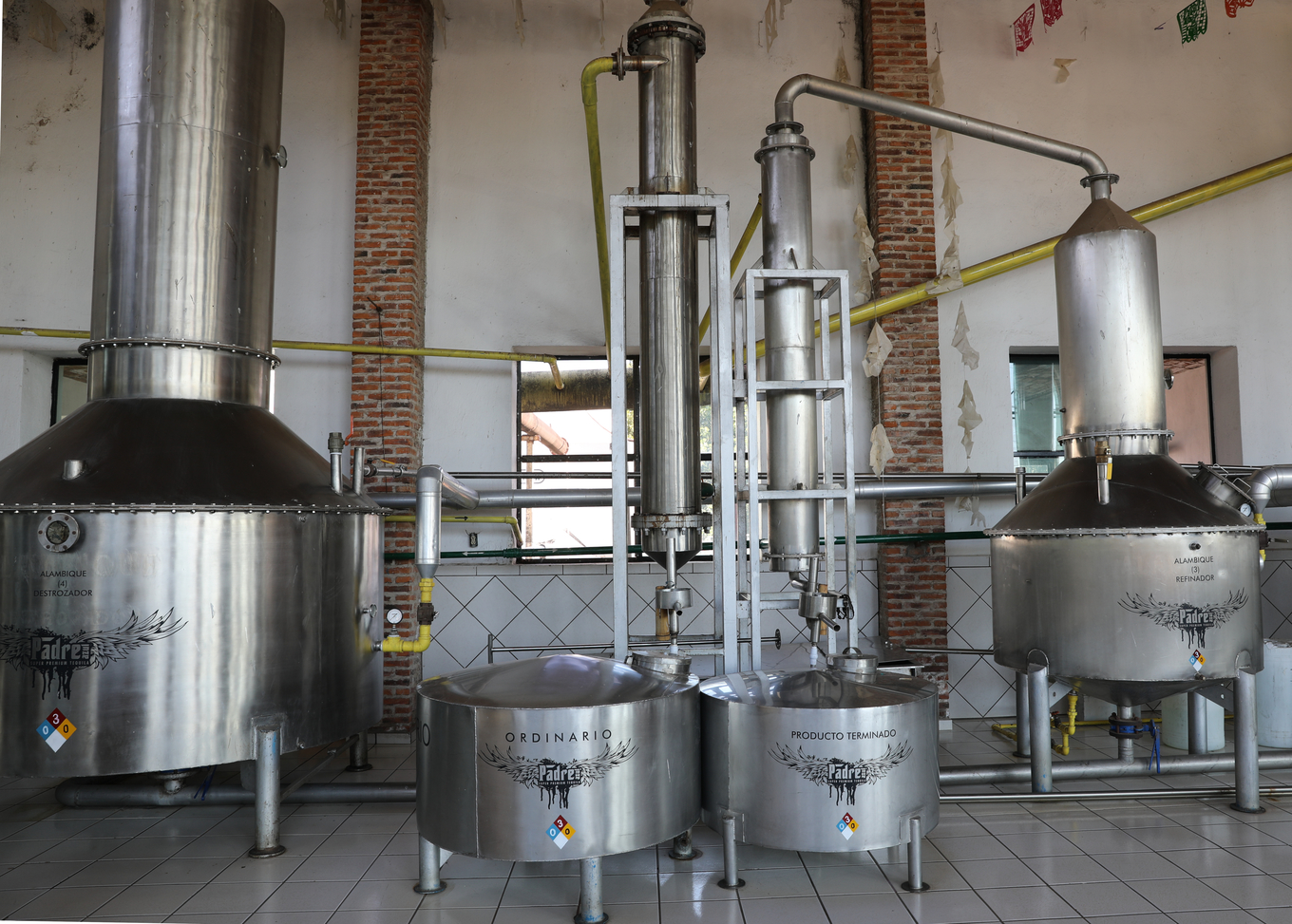 As with all tequila distillation, separating the first distillate to run from the still "heads" (which contains methanol and other highly volatile and unpleasant compounds) from the desirable "heart" distillate and then cutting again to avoid the oily "tails" at the end of distillation is crucial to the quality of the final tequila. I tried to pin Erika down on the exact alcohol level of her cut points and how many litres of heart spirit each distillation produced. However, she makes these cuts relying on experience, constant sampling and her sense of smell, rather than digital equipment or even a hydrometer.

Padre Azul Blanco tequila is rested in stainless steel for two to four weeks prior to bottling and has no contact with wood.

Padre Azul Reposado is matured for eight months in medium-char American oak ex-bourbon barrels (more than twice the period required) while the Añejo is aged in the same barrels for at least 18 months. 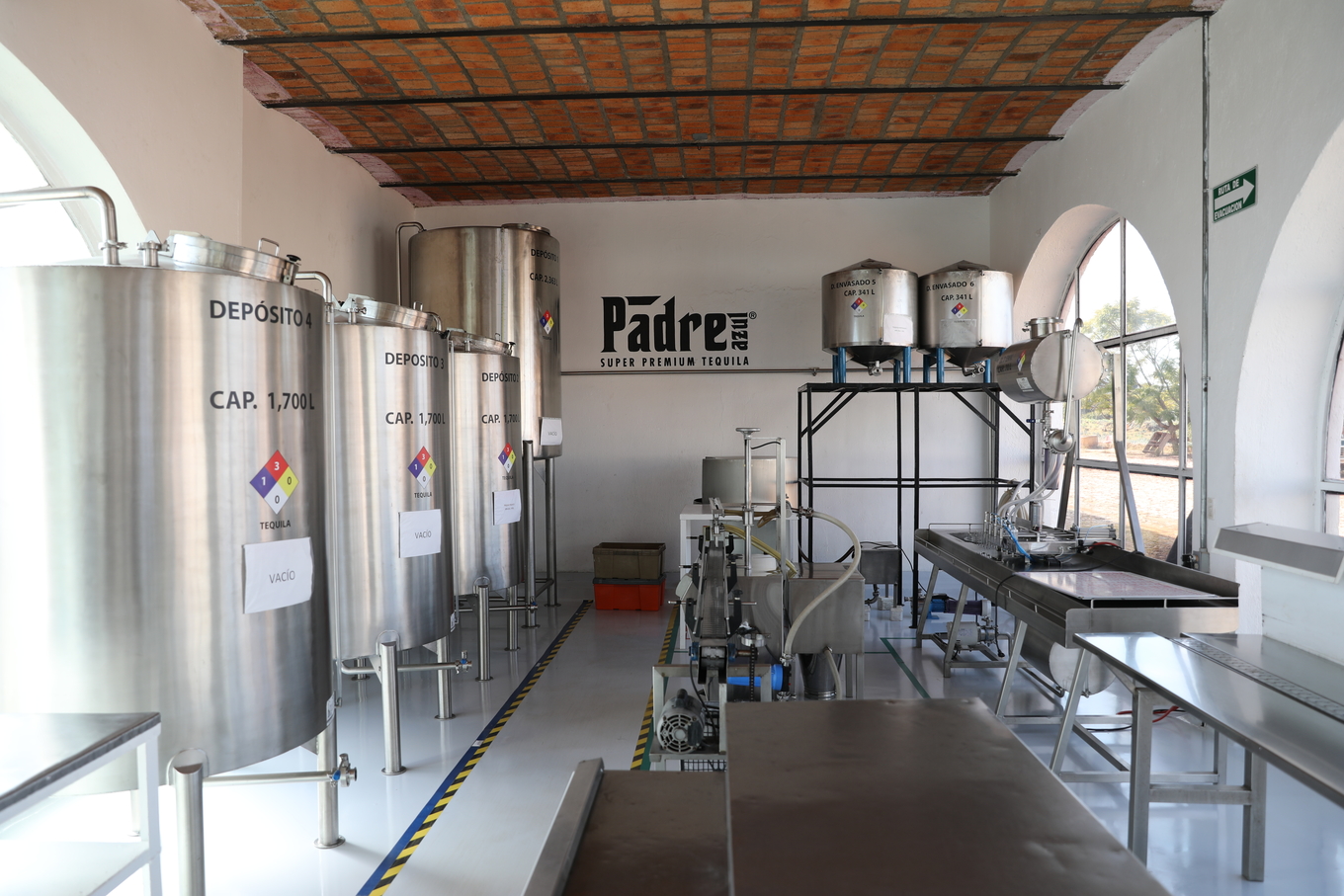 Where Padre Azul's bottled are hand-filled and decorated

Padre Azul's packaging is striking and is incredibly labour intensive with around 100 people involved in the making of each bottle and its accoutrements. The bottles are handblown in Mexico and these are topped by a 270-gram iron skull, also hand-cast in Mexico, which celebrates Dia de los Muertos (the Mexican Day of The Dead festival celebrating eternal friendship). 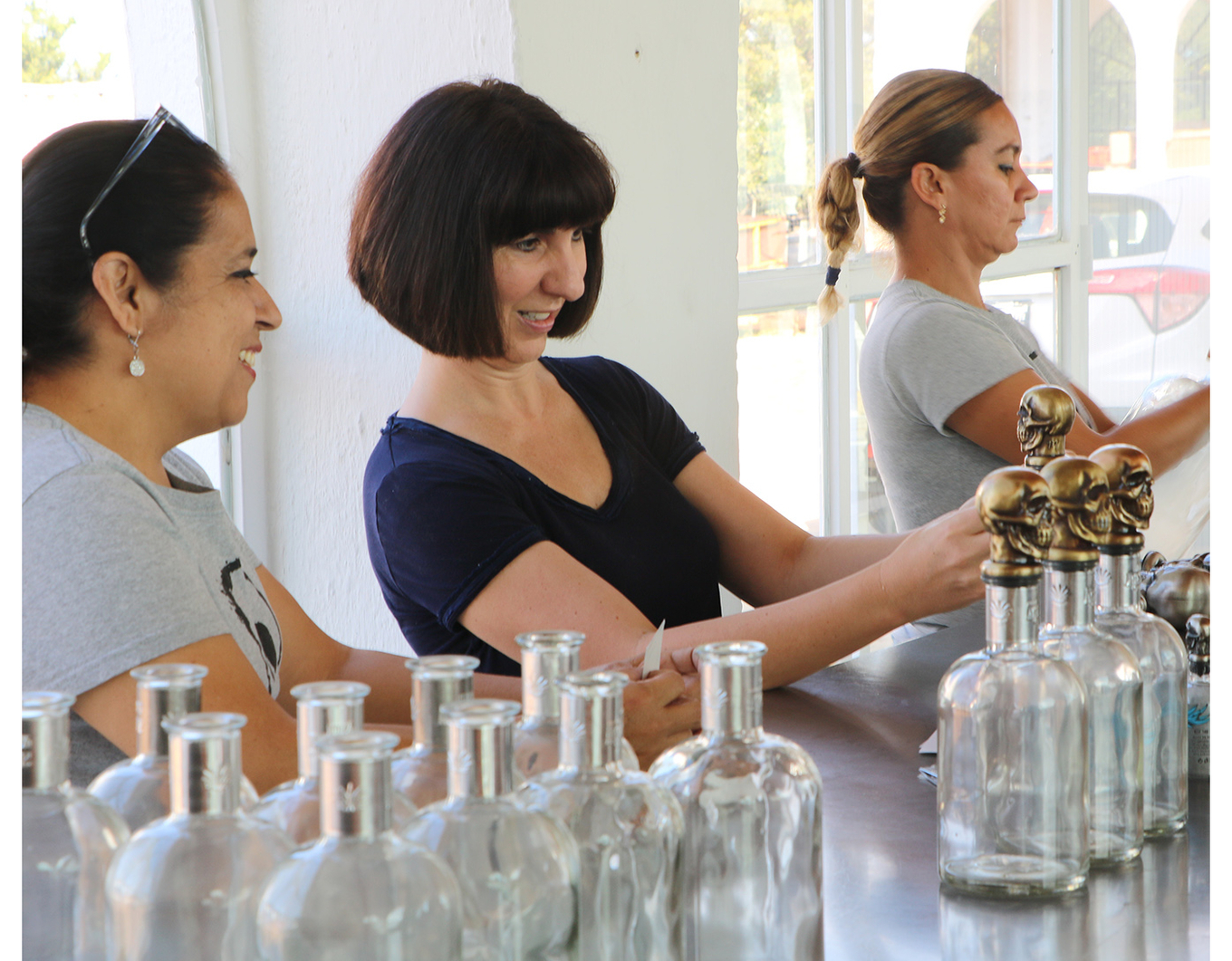 The synthetic "leather" jacket, inspired by Mexican Lucha Libre wrestling masks, is stretched and pulled down over each bottle by hand over the glue which ensures it stays in place. Finally, the tin strap is carefully secured by hand around the neck of each bottle. 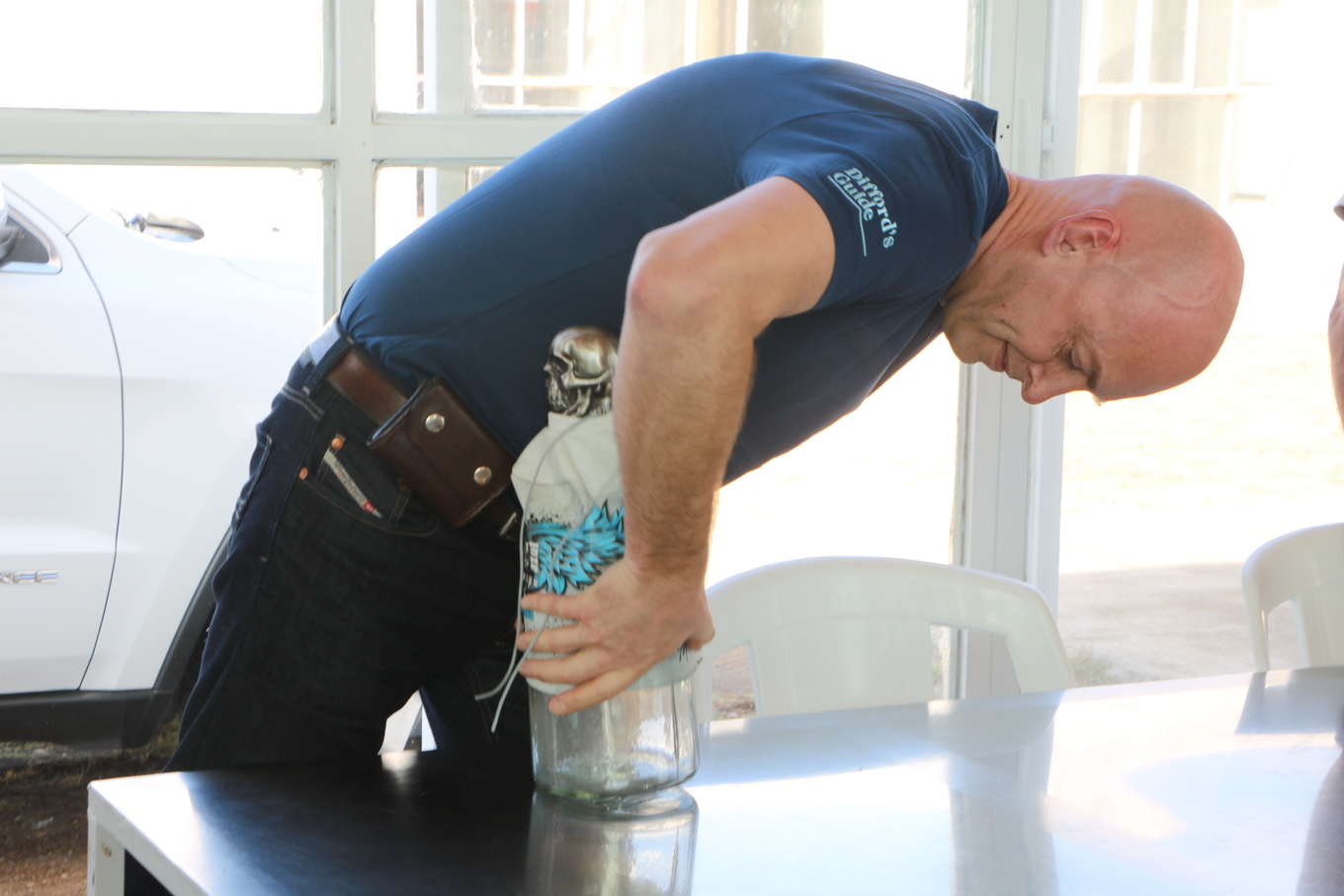 Yours truly straining to stretch and push Padre Azul's wrestling mask over a bottle.

In Mexico, tequila tends to be bottled at 38% alc./vol and so this has been the strength Padre Azul is bottled at for the European market with chill-filtration to ensure clarity. However, due to federal law, all tequila in the USA is sold at 40% alc./vol. so Padre Azul destined for America is bottled at a slightly higher alc./vol. and this negates the need for chill-filtration. These small differences affect flavour and there's a move to change all Padre Azul bottlings to 40% in the future. (Our tasting notes are of bottlings of Padre Azul at 40%.) 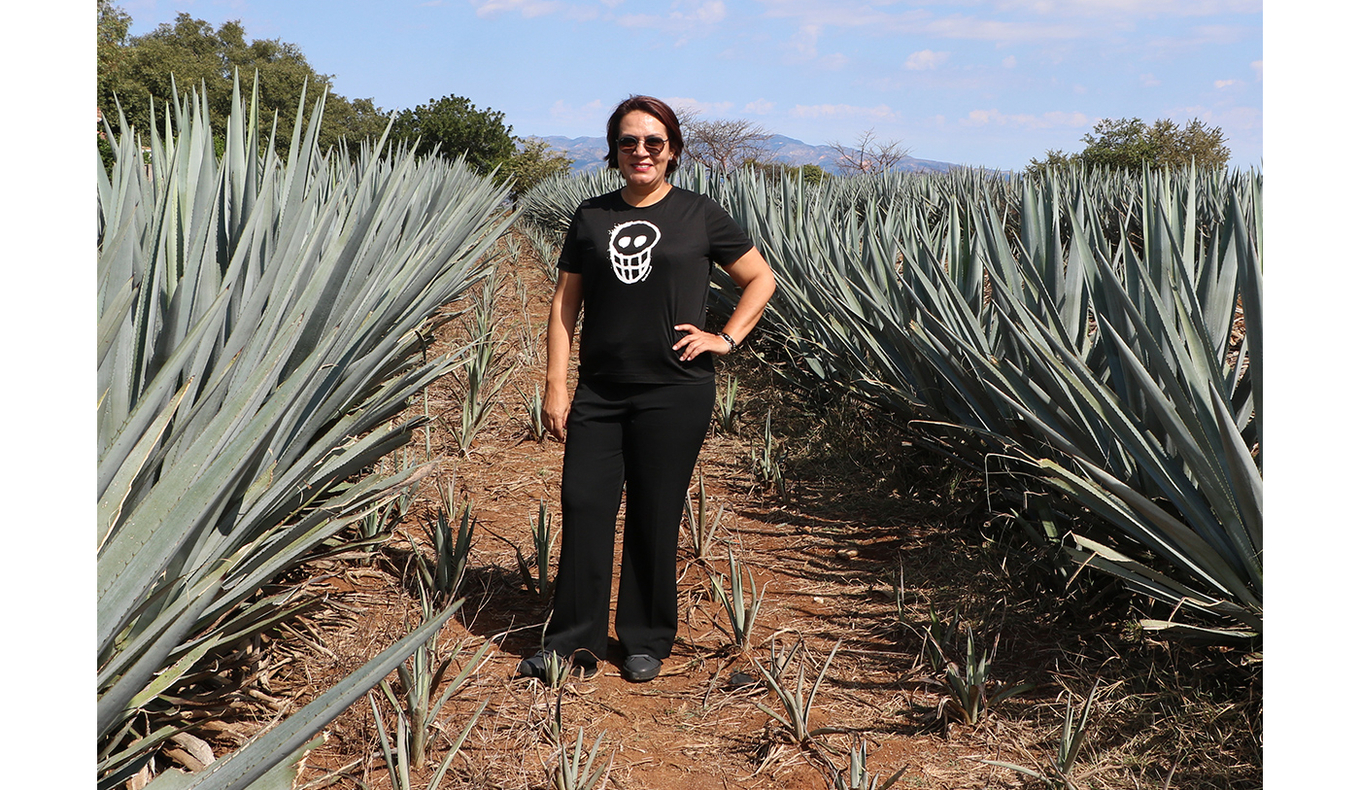 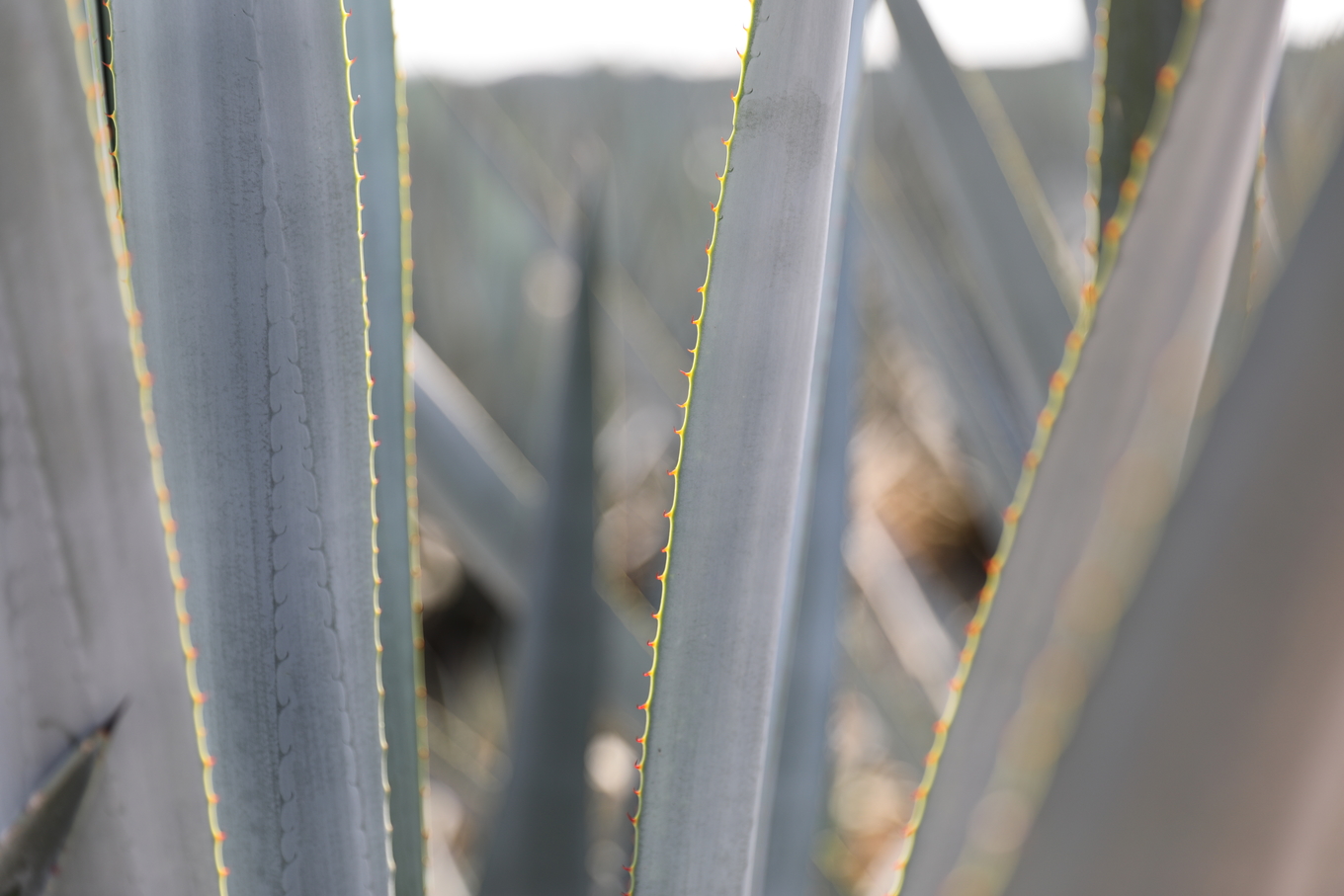 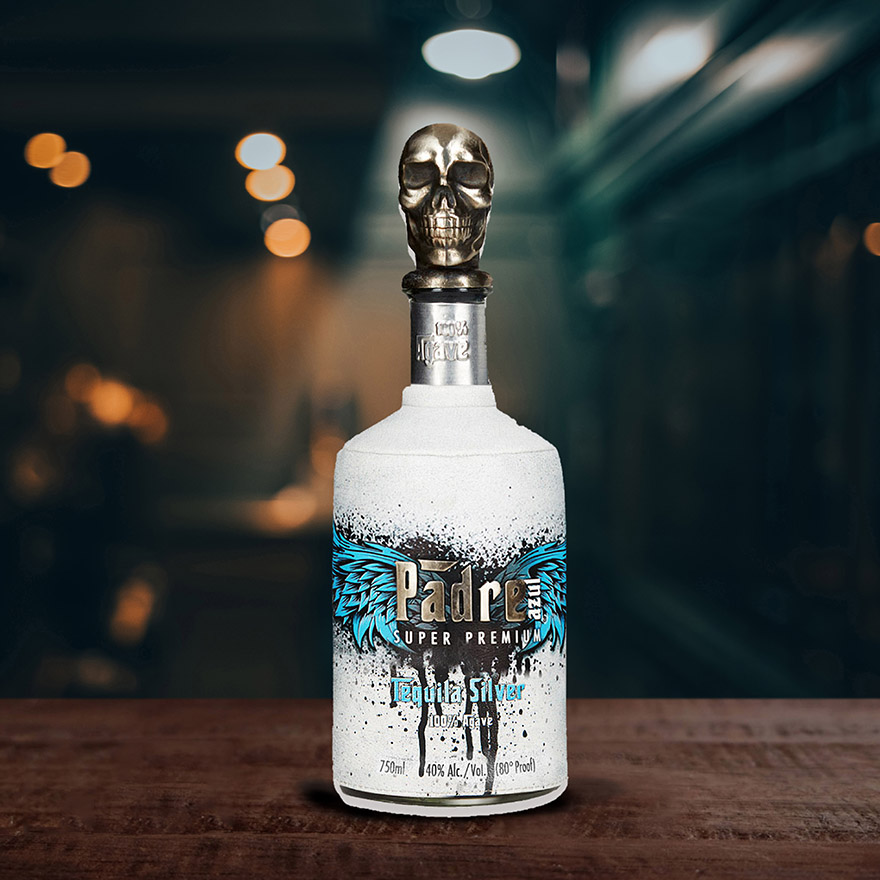 A 100% agave artisanal tequila from the Amatitán Valley, near the town of Tequila. Patre Azul blanco tequila is unaged but is rested in stainless-steel 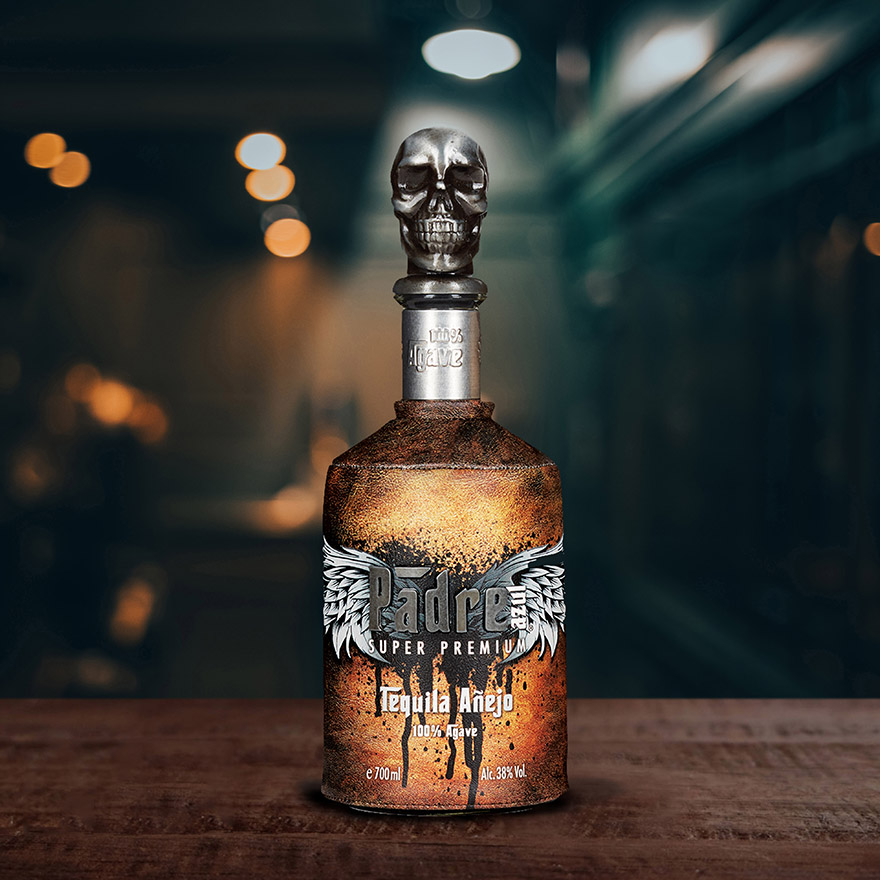 A 100% agave artisanal tequila from the Amatitán Valley, near the town of Tequila. Patre Azul Añejo is aged medium-char American oak ex-bourbon barrels 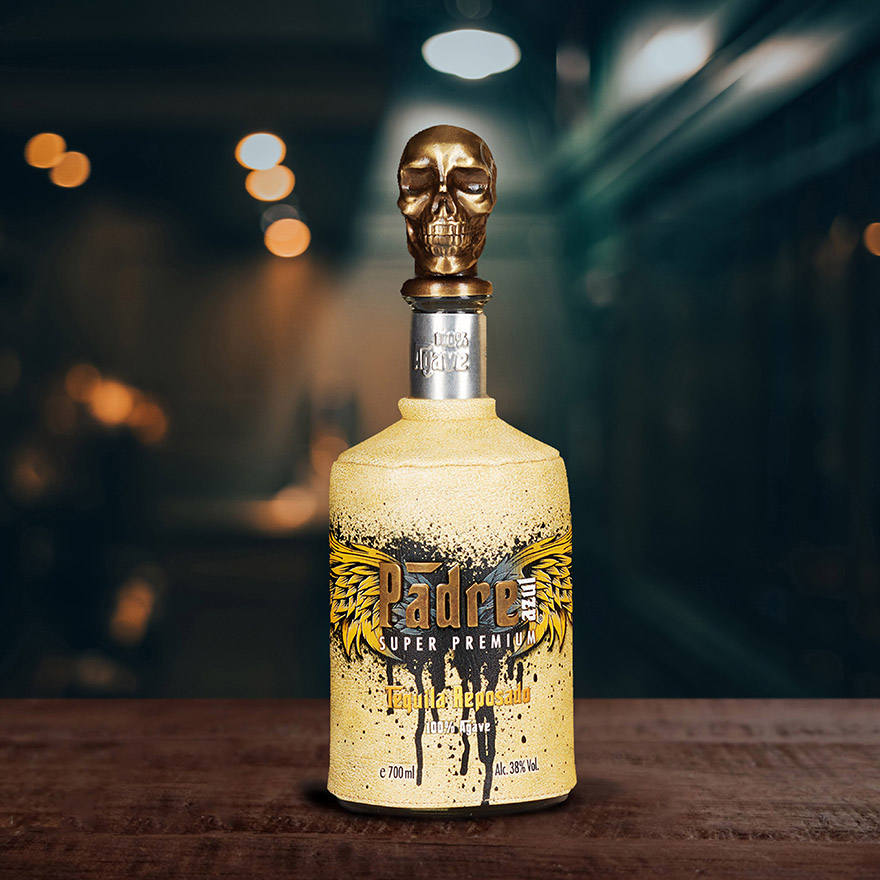 A 100% agave artisanal tequila from the Amatitán Valley, near the town of Tequila. Patre Azul Reposado is matured for 8 months in medium-char American