Back for its third instalment, the 1800 Visionaries cocktail competition brought six finalists to the grand final held at Dalston Roof Park in London. Reaching the end of 1800 Tequila's six-week residency, the rooftop remained decked with artificial grass and deck chairs which made for a cheery and bright atmosphere despite the dreary weather.

As in previous competitions, 1800 Visionaries designates a theme. This year, bartenders were challenged to create a drink inspired by an artist in the world of art, graphic design or music.

It was Sam Boevey from Percy Street's London Cocktail Club to emerge the worthy winner. Sam gave a strong, determined performance while also demonstrating skill, precision and studious research. As champion, Sam took home the grand prize of £2,000 to help pursue his professional passion and express himself creatively.

In second place, Amy Crawford showcased a well-rehearsed presentation and carefully considered drink while third place was awarded to Theo Gordon-Boyd who relayed a poignant story of a bear and a princess represented in his chosen ingredients.

Alongside our very own Simon Difford, the judging panel comprised Oliver Pergl (Proximo's tequila educator), Callum Baines from Treacle Bar & Kitchen (last year's champion) and Johanna Derry (The Jackal Magazine). They were joined by Gabe Cook, cider writer and educator, who took up role of entertainer and host during the afternoon.

Now, for the six competitors, their recipes and the inspiration behind their drinks, take a look below. 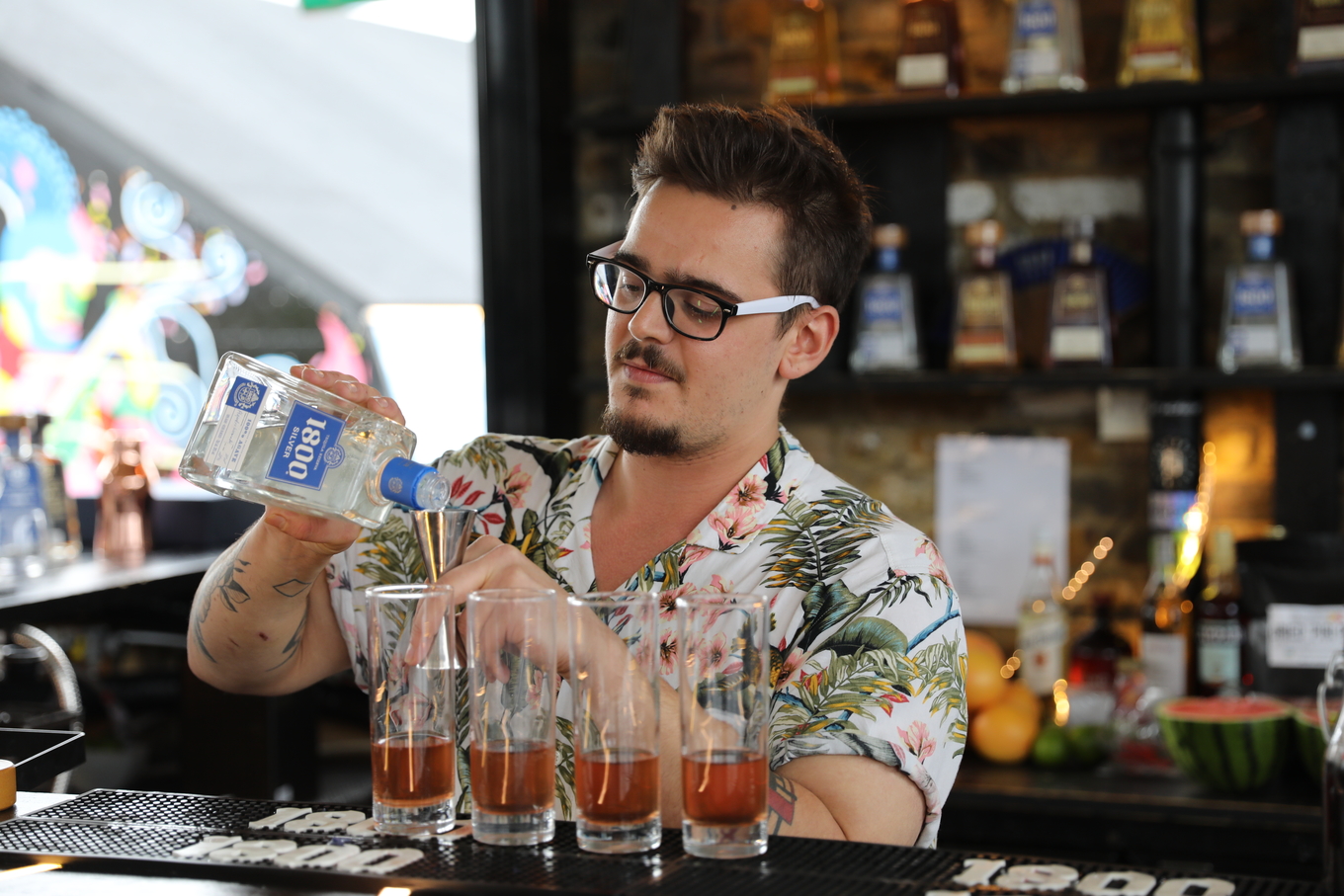 Inspiration: "My drink is inspired by the 20th century surrealist artist René Magritte. The primary reason for choosing Magritte is due to his constant effort to display the dissonance between 'perception' and 'reality'. This topic is very close to me, as it featured heavily in my degree of Metaphysical Philosophy." 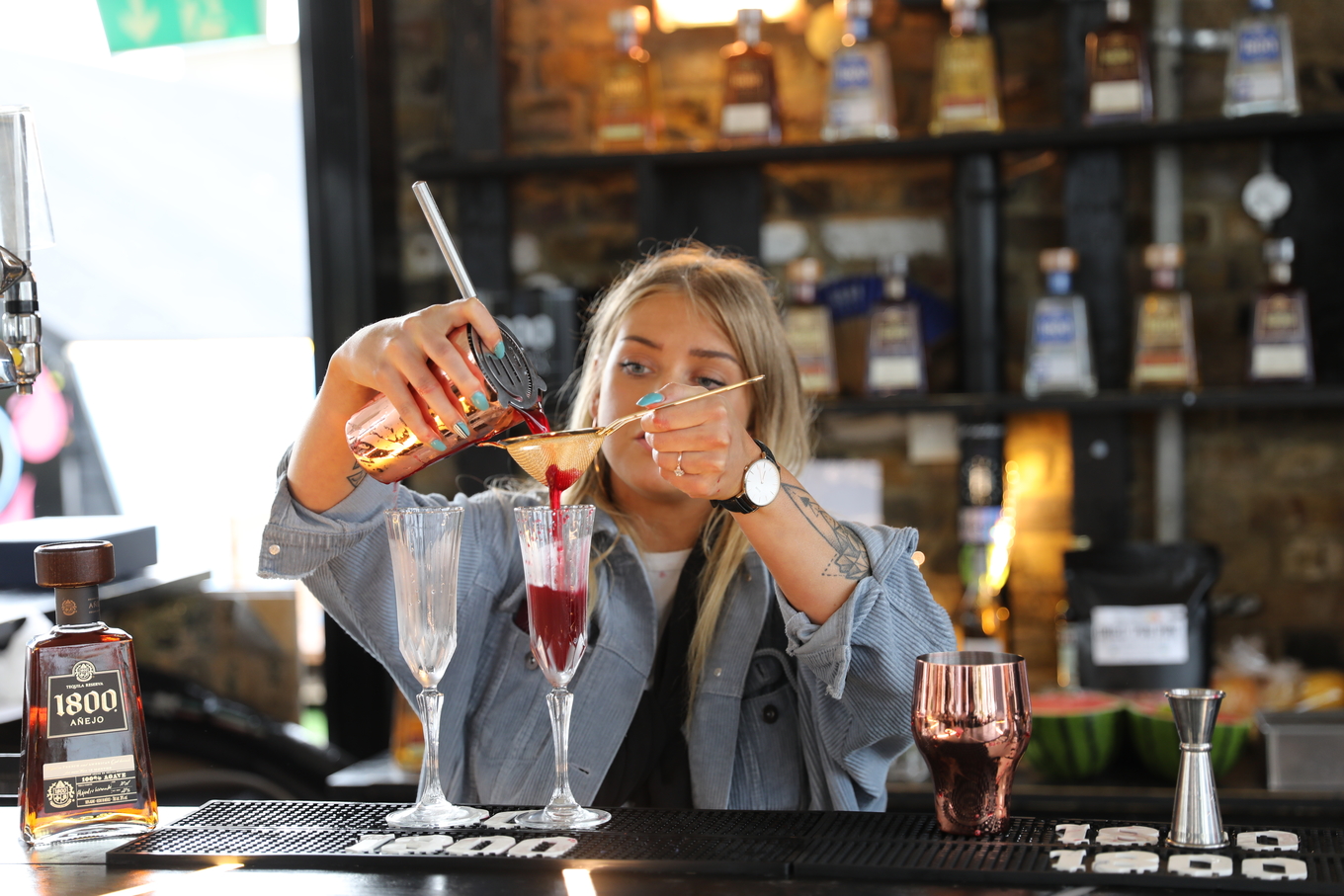 Inspiration: "When asked to think of an inspirational icon whom one could build a cocktail from, the one and only visionary that came to mind was Tom Waits. Waits, despite being known almost entirely for his music, crosses the platforms between art, music and indeed fashion, thus being the most multifaceted and indeed iconic artist I could consider. Having spoken openly in interviews and in a more abstract fashion through his songs about not only his fascinating life experiences but also his intriguing fundamental beliefs, sparking the inspiration for the ingredients present in Vacation From Reality.

"Waits, in an interview in his earlier life when asked where 'genius' comes from, recounted a time when he was a firefighter on the Mexican border. He explains how he saved 100 chickens from burning to death in Jacumba, and when asked how he dealt with this he said 'It was an emergency, and when dealing with emergent behaviour there is nothing to do but respond. I was in the moment. And it was not the fire I imagined or dreamed of. It was the fire I got,'. This reference has been made several times throughout Waits' career alluding to his inspiration for songs and artistry. I found the element of spice to be incredibly helpful in creating a drink synonymous with Waits.

"Throughout the entirety of Waits' career there has been an allusion to the colour red, both in his songs and fashion; "red shoes in the drugstore" an ode to the rise of the 'iron curtain' of communism during that period of his life. The beetroot in the drink represents this notion, both colouring it vibrantly and pairing well with the earthy tones present in the drink.

"Waits has a long history of alcohol references through songs, and indeed in interviews. Whilst Waits remains elusive on a more personal level, he is transparent about alcohol and his consumption of it. 'Warm beer and cold women' is one of the many references Waits makes to his partiality to the beverage, that and his self-proclaimed title of 'Beer stained bard of the bar-stool' inspired the use of beer honey within Vacation From Reality.

"The name 'Vacation From Reality' came from an interview Waits gave after his decision to enter into sobriety. In a poetic fashion he explained his relationship with alcohol was more of a vacation from reality, suggesting heavily alcoholic drinks were the quickest way for him to reach his vacation from reality. This was hugely inspirational in the making of this drink, as it seemed like a journey from alcoholism and an unhealthy relationship with drinking and finally transitioning into a beautifully reflective and fresh interconnection between Waits and alcohol.

"The only apt way to picture this cocktail references Waits song 'The Piano has been drinking', a deliberately absurd song about everything and nothing at all, in the same way, making perfect sense. Much in the way I hope for my drink to be viewed." 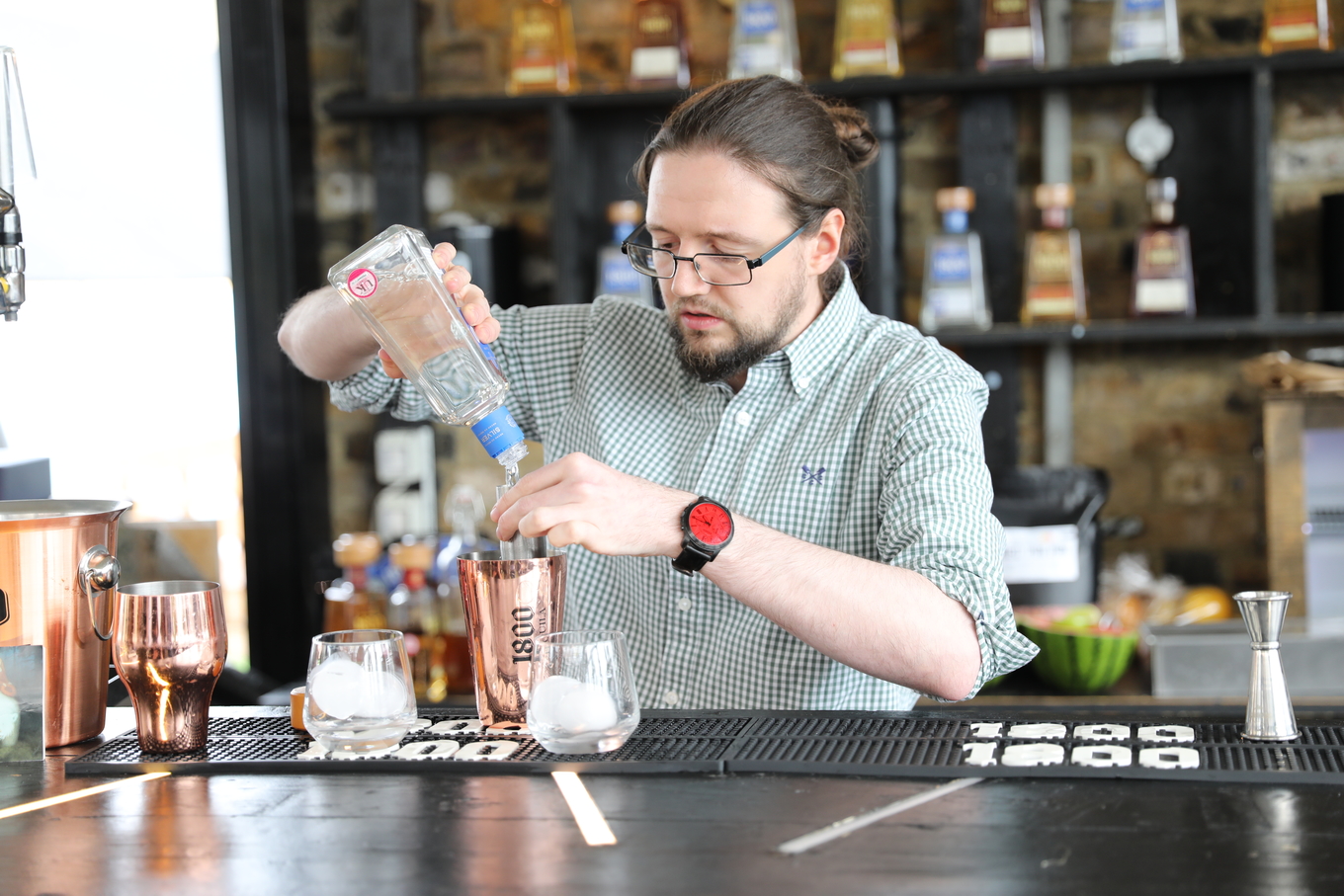 
Bear In the Woods

Glass: Tumbler
Garnish: Lemon peel spiral with blackberry
Method: First set up your glass and put in a round sphere ice, created by using a mould and distilled water. Start by muddling 20 blueberries and 1 blackberry. Add 15ml fresh lemon juice and 15ml maple syrup. Finally, 50ml of 1800 tequila. Shake with ice then double strain into glass.

Inspiration: "The inspiration for my cocktail 'Bear in the Woods' is a painting from Theo Kittelsen, one of Norway's most famous and popular artists whose paintings and illustrations really invoke the essence of the country's landscape and spirit. Kittelson has been my favourite artist since I lived in Norway for a year when I was 13 and enjoyed walking in the woods beside my home. I came across Kittelson's art due to my passion for and love of metal music - several black metal and folk metal bands have used his work for album covers. On further investigation I soon discovered Kittelson's art is atmospheric, unique and enchanting – all the things a good cocktail should be!
Like 1800 tequila Kittelson's art reflects values of hard work, passion and honesty.

"I have a print of the 'White Bear King Valemon' in my home and this beautiful painting is the direct inspiration for my drink. I hope the combination of 1800 Silver Tequila with its crisp, clear flavour and my other ingredients will bring to mind the taste of a woodland fairy tale. The ice sphere is the bear, cool and glacial. The muddled berries and maple syrup are the forest and garnish of spiralled lemon rind the princess' golden wreath, and the Tequila - well the its the finishing magical touch!" 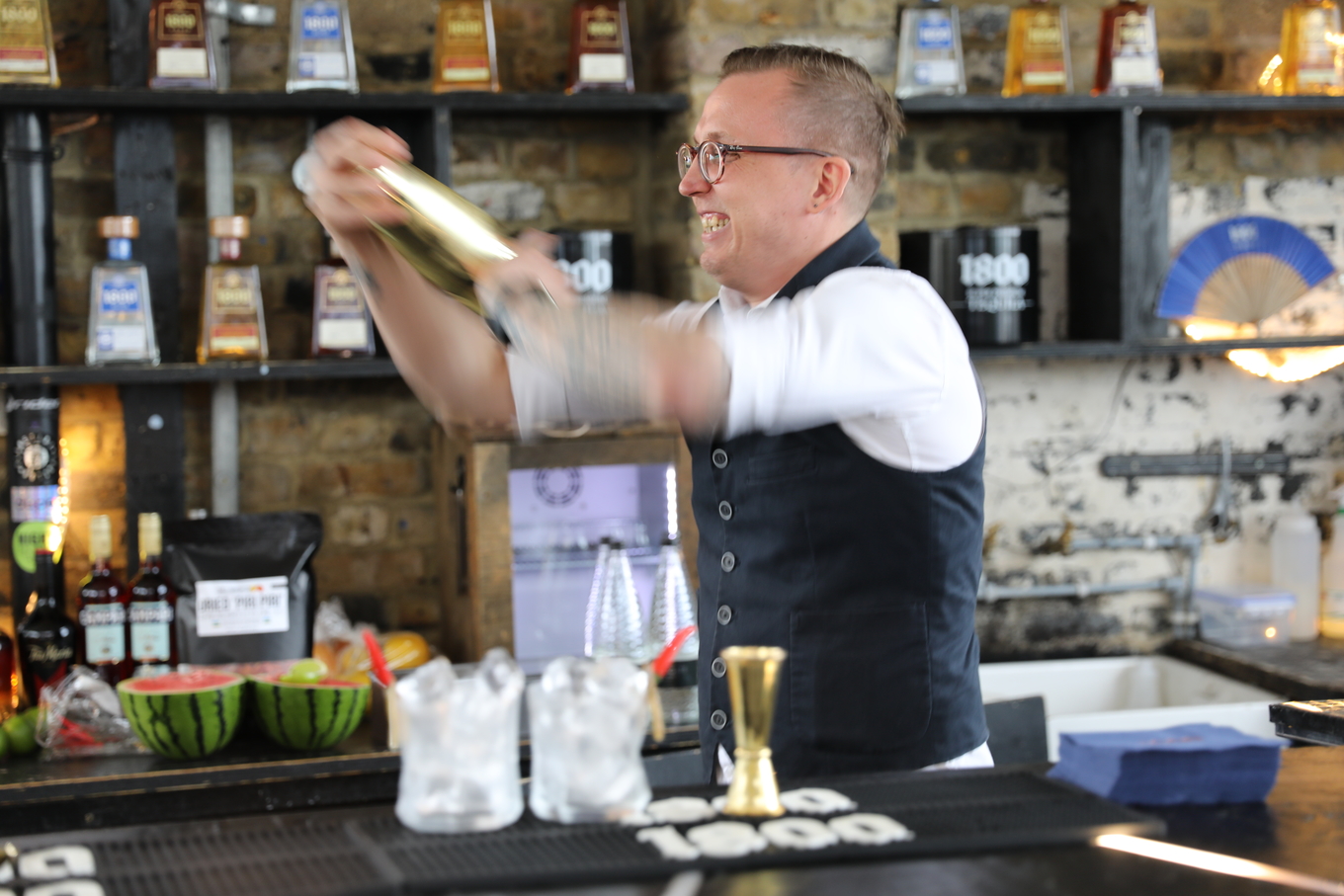 Glass: Rocks
Garnish: Bird eye chilli and dried
Method: Shake with ice and strain into ice-filled glass. Serve on a vinyl coaster. Vladimir proposed the drink can be served both chilled and at room temperature.

Inspiration: "Dedicated to Keith Flint (the prodigy) the cocktail is full of flavour with a powerful kick of spicy flavour and a strong colour like his voice and personality!" 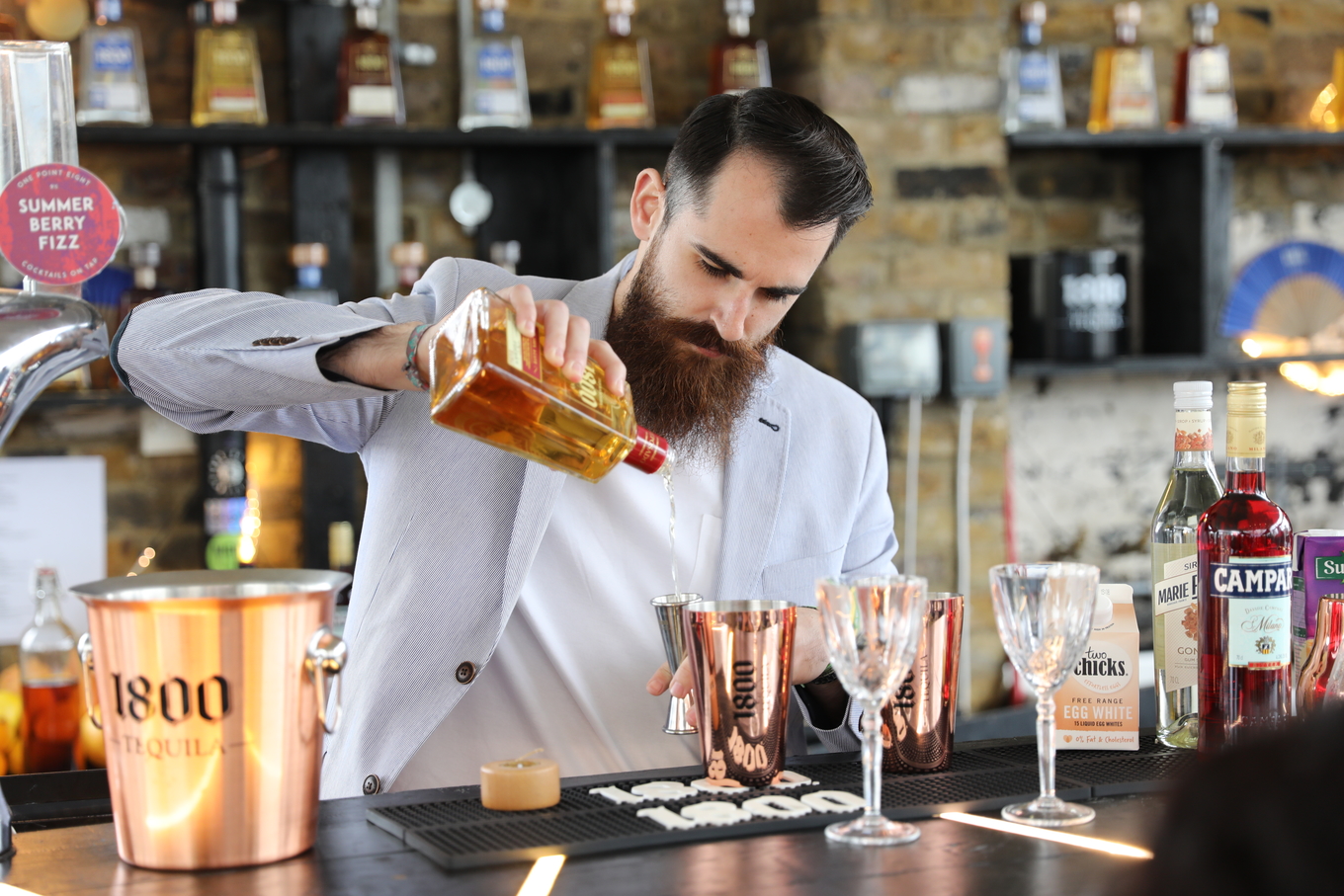 
For The Good Of All

Inspiration: "My inspiration comes from Vincent Van Gogh (1853 - 1890). The Post-Impressionist Dutch painter lived in poverty despite of being an art referent. Vincent unsuccessfully tried to work as an art salesman, a clerk in a bookstore and a preacher. He loved painting and decided to create art.

"Van Gogh studied art and he started painting but he was barely able to sell his paintings. After generating a mental illness, he was sent to an asylum for two years. After two months out of the asylum he shot himself.

"The paintings of Van Gogh shows passion, imagination, rhythm and his own dramatic style. Bartenders create liquid art, make people happy with their creations and passion by mixing different drinks trying to tell and history or transporting the customer to a different place or sensation. But sometimes is difficult to sell our history or make people believe in our art.

"For The Good Of All tries to be a simile to Van Gogh's life: fruity, crisp and smooth as his paintings but bitter at the end, as his end." 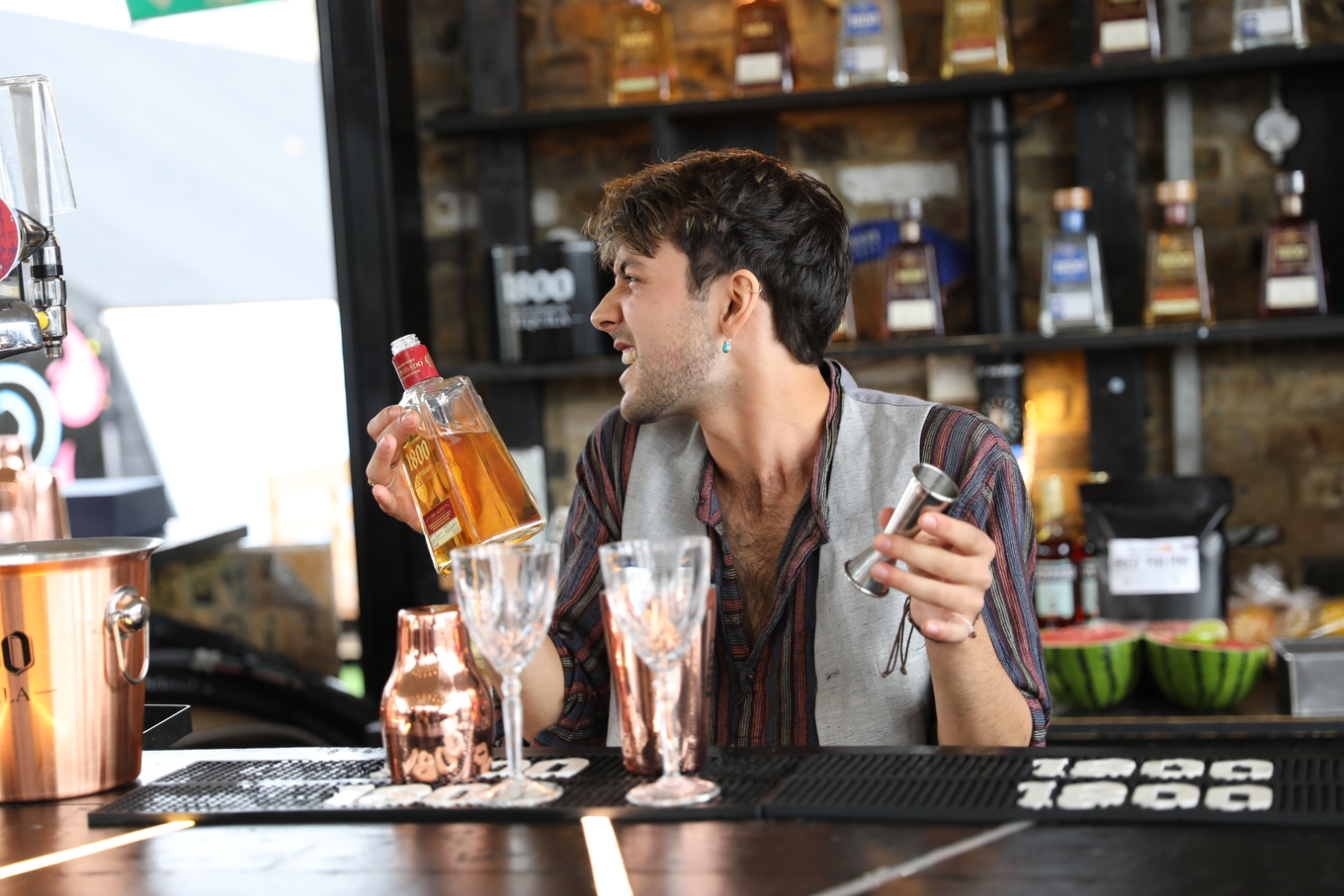 Glass: Shallow Coupe
Garnish: Rough cut, salted, hairy kiwi peel
Method: Shake and strain into glass over piece of watermelon, then pour Tia Maria over barspoon into the glass so it settles at the bottle, garnish and serve.

Inspiration: "Something that has been gruelling me in the cocktail world seems to be what is all so thrilling - how intricate and complex cocktail mixing is becoming and the weird and wonderful things that are coming from it! While it's incredible the kind of things that people can do to make a drink in this day and age, it's quickly becoming niche - arguably filling with the pomp of specialism.

"Similarly a hot topic, the art world has been suffering the same ills: Micro-grain sound art, VR interactive portraiture, arc welded firearms as social sculpture. While incredibly skilled, beautiful and possibly profound in many cases, the naked truth of beauty and simplicity that is universally loved in the traditional methods is lost. With that in mind, the natural inspiration for an artist inspired Tequila cocktail is Mexican painter and activist, Frida Kahlo. Her penchant for surrealism, still life and an oil medium are the aesthetic inspirations for the (More than a) Mono-Brow. An initially striking contrast of green, black and red, of the kiwi, coffee liqueur and watermelon parallel the fruit and colours of her painting "Still Life with Parrot and Fruit". The garnish of a salted, hairy kiwi acting as a nod to her distinctive mono-brow and the (not-so)traditional salt and lime served with Tequila. When stirred post-mixing, the Mono-Brow takes on an oily appearance, resembling the palette of her chosen medium.

"Although, more importantly than just a homage to an unkempt Mexicana, this cocktail was inspired by her indigenous nationalism, individual femininity and her entirely unapologetic authenticity in the surreal. This woman had no bells and whistles in her art, no grandiosity of perfectly formed fruit, or hyperbole of her own beauty (or anything else for that matter), her art was as she was; simple, weirdly beautiful and proud. So this cocktail has no fancy infusions, nitrous, flames or alchemical apparatus; it celebrates its pre-possessing weirdness through its simplicity in creation and diversity in content. Kahlo had no need for more than her oil paints, native parrots and canvas and this drink has no need for flame juggling, centrifugal mixing or citric clarifications. It's fun because it looks fun and tastes fun, it's enjoyed because it's versatile and delicious, it's inspired by Kahlo, because it's authentically Mexican, simply made and unsettling pretty in a way most drinks aren't." 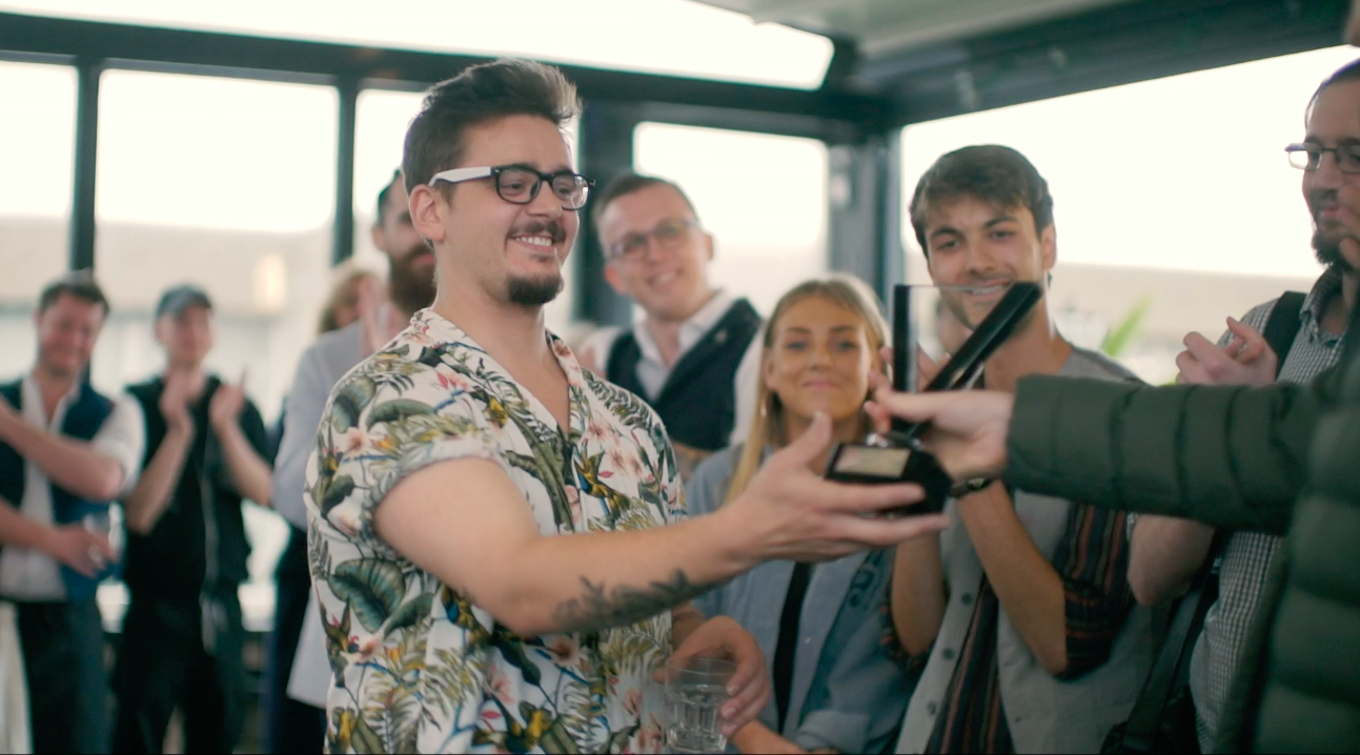 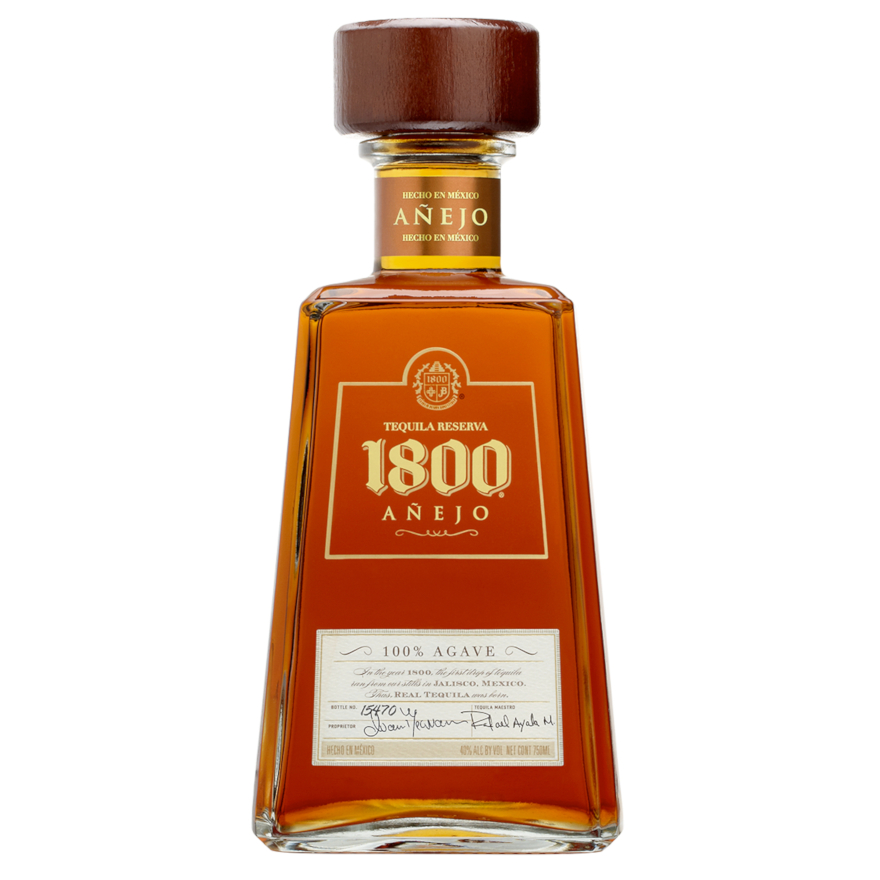 This 100% agave Tequila is aged for over a year in small French oak re-charred casks. 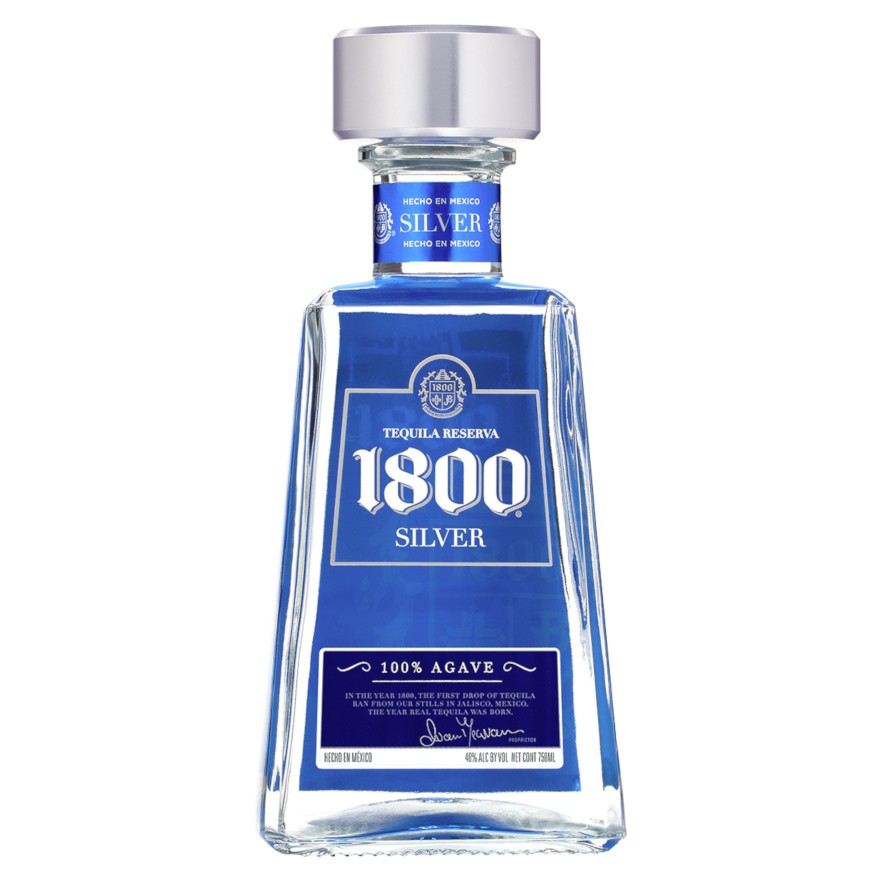 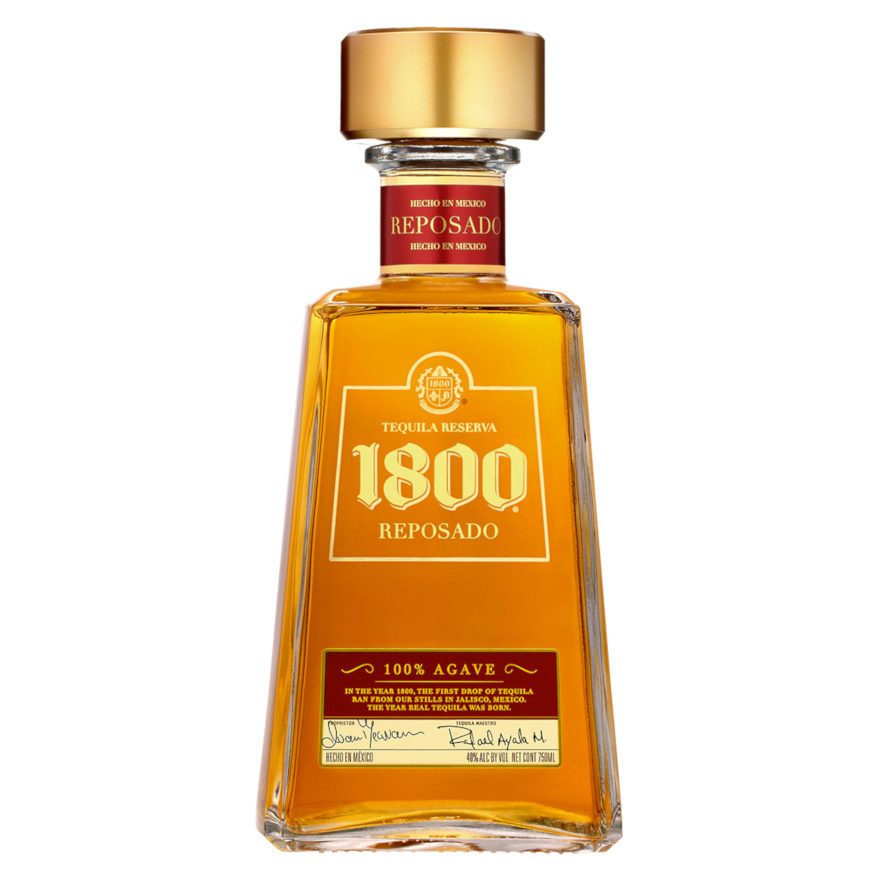 A 100% agave reposado tequila rested for a minimum of six months in American and French oak casks. 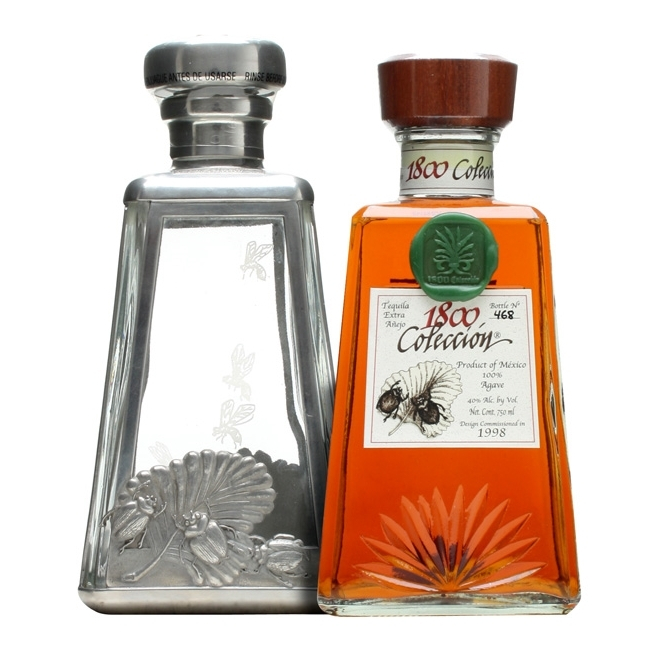 This super premium, 100% agave, extra añejo tequila is aged in new French oak casks and blended with reserve tequilas, some of which are as old as 50 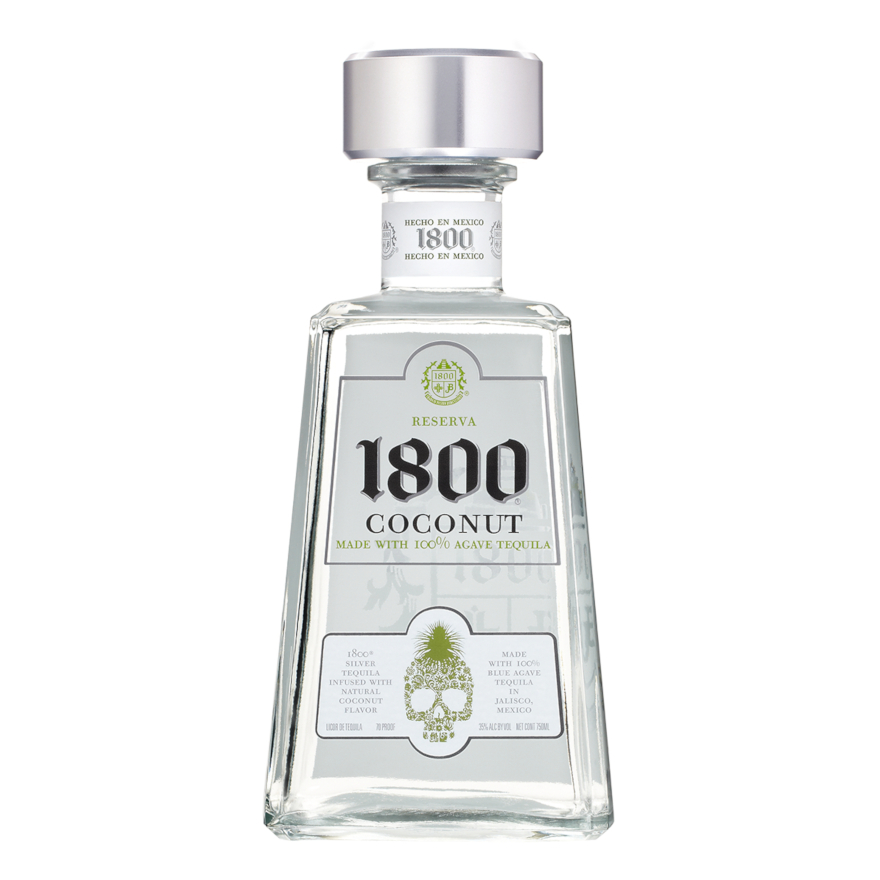 Released in 2016, 1800 Coconut Tequila is made with 100% agave tequila infused with fresh coconut water.