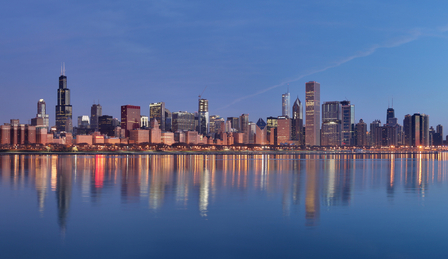 The skyscrapers of Chicago rise up from the western shores of Lake Michigan in a vista immortalised in a thousand gangster films. But, for all its lurid history, this is a friendly city. Chicagoans have a reputation for enjoying their food and loving their sports, while the city’s jazz scene is internationally known.

It is easy to find your way around Chicago. The major shopping street, North Michigan Avenue (also known as the Magnificent Mile), runs from the historic Water Tower Square across the Chicago River to the Millennium Park and the top of the Loop. Here the raised metropolitan railway (known as the 'El' or 'L') circles the central Downtown business and shopping district.

While Chicago is not the home of the burger, it is where Ray Kroc opened his first McDonald's franchise. Locals also appear proud of the city's flavoured popcorn. The city boasts a thriving restaurant scene and even half decent Chicago restaurants produce American steadfasts such as ribs, burgers and steaks brilliantly.

Chicago has long been known for its beer bars but in recent years a vibrant craft cocktail scene has also developed. Many of the best bars lie outside the centre of town in residential areas and many are restaurant bars with the food as high end as the cocktails. Chicago also has more than its fair share of great jazz clubs, so if you like blues you'll be right at home.

Follows our pick of Chicago's best bars by district:

The Aviary
Aviary is unlike any other bar you're likely to have visited - there's no bar, no bartenders and no bottles on display. Drinks are made back-of-house, then served in a restaurant setting, with restaurant formalities. It is very formal. Dare I say, a tad poncy. 3.5/5
955 West Fulton Market, (corner N. Morgan St), 60607

The Duck Inn
Best described as a high-end gastro pub and as the name might suggest, The Duck Inn specialises in duck dishes and American comfort food staples. Even the cocktail menu kicks off with 'The Duck Out', made with duck fat washed cognac, crème de mûre, manzanilla sherry and Chinese five spice syrup.
2701 S Eleanor Street (S. Loomis Street), 60608

Near North Side, Gold Coast

Benny's Chop House
A classic large upscale American bar with big framed televisions and a baby grand piano. The bar counter alone seats 20 and out back is an equally grand restaurant seating some 150. Benny's is not on the fashionista's trail and not famed for its cocktails but this is one of our favourite spots for brunch as the menu is so darned good. The glass walled wine cellar behind the bar and the Enomatic wine machines are a sign of how seriously wine is taken here. 4/5
444 N. Wabash (btwn Hubbard & Illinois Sts), 60611

Bernard's Bar
Everything about this place is classic, from the hotel that houses it, to the decor, the soft jazz and the cocktail menu. Safe and as cosy as velvet smoking jacket. The plush room's decor runs the spectrum of tones of brown and dark wood and has something of a luxurious bronze glow about it. 3.5/5
Waldorf Astoria Chicago, 11 East Walton Street (N. Rush St), 60611

Drumbar
The repurposed service elevator will whisk you up to this speakeasy-inspired rooftop bar at the Rafaello Hotel. As the elevator door opens you are likely to be met by a wall of music from the exuberant DJ and the noise of chattering hipsters in party mode. 3.5/5
Rafaello Hotel, 201 E Delaware Place, (Mies Van de Rohe Way), 60611

Hubbard Inn
Described as being a "continental tavern" fellow Brits will better recognise the Hubbard Inn as being a very large 'gastro pub'. Despite the "continental" billing, the Hubbard Inn has a decidedly North American feel which is matched by its food offering. It also boasts an extensive range of ales and lagers - 21 canned and bottled craft beers with a further 20 on draught. 4/5
110 West Hubbard Street

Scofflaw
Gin-centric cocktail bar meets dive bar in an urban boudoir with craft beer and pub grub. So popular is this combination that at least a 40 minute wait is to be expected to gain entry in Scofflaw late week and weekends. They don't take reservations. 4.5/5
3201 W Armitage Avenue, (corner N Kedzie Ave), 60647

Analogue
A hipster cocktail bar with a slushy iced cocktail machine and purls (bitters and beer) serving traditional southern Cajun/creole inspired food. The dimply lit atmosphere pulsates with upbeat rock, dance and electronic music driven by the DJ sat over the door and at a volume that can make conversation a challenge. 3.5/5
2523 N Milwaukee Avenue (btwn W Logan Blvd & N Sacramento Ave), 60647

Au Cheval Bar & Diner
Best described as an upscale diner with an open kitchen come bar. There's a clutch of seats at the end of the bar counter near the entrance dedicated to drinkers but Au Cheval is primarily a restaurant rather than a bar. However, it's a restaurant - well diner - serving good cocktails and an impressive 35 beers on draught. We particularly recommend the local Sweet Leif, a Belgian style pale ale brewed with sencha green tea. 4/5
800 W Randolph Street, (N Halsted Street) West Loop, 60607

Sepia
Sepia is chiefly a highly regarded restaurant and in our experience justifiably so. However, the front of Sepia is out-an-out bar with the bar itself backing onto the dividing wall with the restaurant behind. The bar area accommodates some 30 people either sat at the marble-topped bar counter, in the seating by the window or stood at the low dividing wall with its leaner shelf. This is a high-end but relaxed eatery and the welcoming bar reflects this. 4.5/5
123 North Jefferson Street, (W Randolph Street)

The Violet Hour
This vast basement lounge behind a hidden entrance is one of Chicago's most respected cocktail bars - justifiably so. The 'speakeasy' entrance to The Violet Hour is hidden in plain sight camouflaged as part of a frequently changing mural running the length of the wall. Once you've located the door inside you'll almost certainly find yourself at the end of a line of people waiting to go in. It's first come first served with no bookings so perhaps plan to be there for 6pm when they open. 5+/5
1520 North Damen Avenue, Wicker Park, 60622

Bar DeVille
Bar DeVille is neighbourhood bar with a laid-back atmosphere enjoyed by a hipster audience. Beer chased by whiskey and tequila shots are the order of choice. Bar DeVille sits in a neighbourhood with few other bars - especially of this calibre so come early or expect to stand in a line.
701 North Damen Avenue (nr W Huron Street), Ukrainian Village, 60622

Big Star
Big Star is all about bourbon, tequila, beer and tacos. It's housed in an old garage bang opposite The Violet Hour and is brought to us by the people behind local institutions Avec and Blackbird. Big Star is just that - big - encompassing a patio, then conservatory and then warehouse-like space beyond with a large central island bar at the rear. It's a fun place and the tacos tasty. 4/5
1531 North Damen Avenue (W Pierce Avenue)

The Barrelhouse Flat
Split over two floors, the ground floor is reminiscent of a saloon bar, with a low-lit dark wood interior and a choice between a seat at the long bar or a clandestine booth; and upstairs cosy armchairs and velvet couches are spread over a wooden floor. 4+/5
2624 North Lincoln Avenue, 60614

Sable Kitchen & Bar
Surely Chicago's best hotel bar, Sable is as impressive and inviting during the day as it is by night, while the drinks menu is so all encompassing that it kicks off with a contents and epilogue page. 4.5/5
505 North State Street

Berkshire Room
Beyond the curtain at the far end of the Acme Hotel lobby you'll find The Berkshire Room. The double height great hall-like entrance leads across a chequerboard floor to a very well stocked spirituous bar with great line ups of mezcal, bourbon, scotch and gin.
Beyond the arches on either side of lie darker, cosier and altogether more intimate warmly lit lounge spaces. 4/5
15 East Ohio Street

Three Dots and a Dash
Three Dots and a Dash is undisputedly one of Chicago's best bars and one of the most highly regarded Tiki bars in the world. Its entrance lies down a narrow service alley and can be a challenge for visitors to the city to find. Follow the crowd and unless you've turned up early be ready to stand in a line. We'd suggest you make a reservation. 5+/5
435 North Clark Street

The Drifter & Green Door Tavern
The Drifter is a surviving example of one of Chicago's original speakeasies, this historic tiny subterranean cocktail lounge sits hidden in the basement of the Green Door Tavern - so two great venues under one address - a characterful pub and a speakeasy cocktail bar of some repute. 4/5
678 N Orleans Street (corner W Huron St), 60654