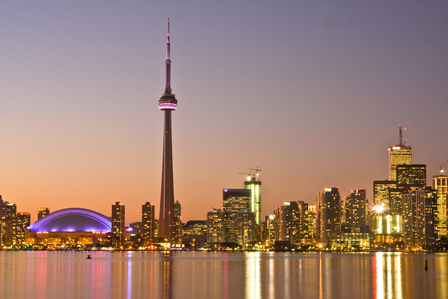 Toronto has come a long way since British actor/director/playwright Peter Ustinov called it “a kind of New York run by the Swiss”. It’s still clean and remarkably safe, but has also become a lot more fun.

Although Canada's largest city, with a population of some three million people, Toronto is decidedly mid-sized on the world stage. Set amidst the rolling farmland of Southern Ontario on the north shore of Lake Ontario, it is bracketed by two of the major wine-producing regions of Canada, Prince Edward County to the east and Niagara to the south and west. Its well-developed harbour speaks of its long history as one of the most significant ports on the Great Lakes.

In spite of its size and relative closeness to New York City, Toronto has come rather late to the craft cocktail party, seemingly content to let Vancouver lead the way. However, over the past five to ten years, the cocktail scene has been developing at an ever-increasing pace, resulting in some of the best bars in the country. Virtually all are located in the southwest part of the city core, along streets like Queen West (listed by Vogue magazine in 2014 as #2 of the 15 "coolest neighbourhoods in the world"), King West, Dundas West, College, and Harbord.

Despite the youth of its cocktail culture, Toronto already boasts many excellent bartenders and a few outstanding ones. The continuous influx of immigrants to the city has certainly helped with this and Toronto's bars have benefitted immensely from bartenders moving here from other parts of Canada (Vancouver & Montreal), the US (Miami & California), and other parts of the world (London & Glasgow in the UK, France, Milan in Italy, Australia, and both northern and southern Ireland). That being said, the bartenders present often move around within the city, and not a month goes by without some significant change in personnel somewhere. It thus becomes important to follow who is where, as this can have a huge effect on the quality of cocktails and service at a given bar. As well, at least eight noteworthy bars have opened in Toronto in the last year alone. It thus pays to be up on what is happening in the bartending community and we shall endeavour to keep this page abreast of these changes.

Even though it is located in one of the most southerly parts of Canada, Toronto winters can be bitterly cold with a lot of snow. Perhaps because of this, Torontonians are determined to make the most of warmer times of the year by drinking and dining al fresco. Thus, you'll find most bars have a significant outdoor patio area or at least some way to bring the outdoors in.

Recent changes in exchange rates have resulted in a moderate devaluation of the Canadian dollar. Thus, visitors from the USA, the UK, and Europe will find drinking and dining here to be a relative bargain. For example, at the time of writing (August 2015), a $15 cocktail in Canadian funds will translate to approximately £7 (UK), $10 (Euros), or $11.50 (US). However, you'll probably also find the liquor selection more limited than what you are used to at home. This is because the Liquor Control Board of Ontario, despite much improvement in the last couple of years, still limits the variety of spirits for sale in the province. 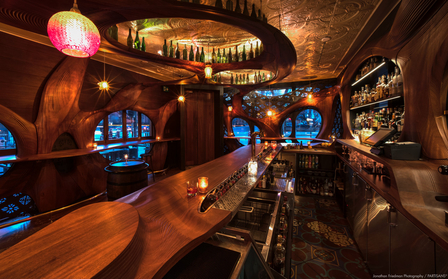 Bar Raval
This small unique bar, with flowing wooden decor, recalls Antonio Gaudi's architecture. Almost completely standing-only, it is meant to evoke a pintxo bar in San Sebastian, and so is open from 8 am to 2 am daily. Cocktails, available from 11 am until closing, range from low-octane, through refreshing, to boozy. This is the place in Toronto to try a cocktail that incorporates sherry, made by the impressive bartending team. 5/5
505 College Street, M6G 1A4 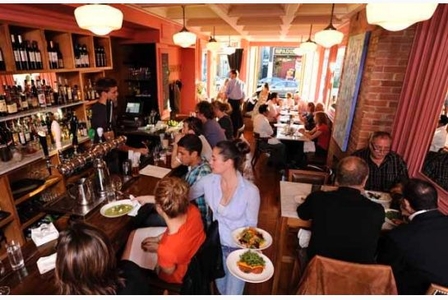 The Harbord Room
Occupying the ground floor of an old terraced house near the University of Toronto, The Harbord Room is popular with locals and food and cocktail lovers from all over the city. The bar itself was made by one of the owners from two slabs of century-old Mennonite barn wood. The cocktail menu consists of in-house creations that reference the classics. The recent arrival of Evelyn Chick from Vancouver has added significantly to the variety and combinations of flavours. 5/5
89 Harbord Street, M5S 1G4 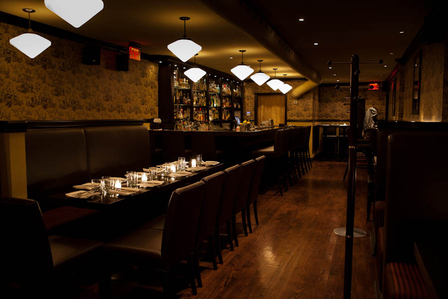 Toronto Temperance Society
Beside Sidecar on College Street, an unmarked door admits those with a membership card to this relaxed, members-only speakeasy. Opaqued windows give the upstairs bar a timeless, mid-evening feel. With two of the best bartenders in the city, the classics dominate, but it's in the dealer's choice cocktails that they really specialize. 5/5
577A College Street, Toronto, Ontario, M6B 1G2 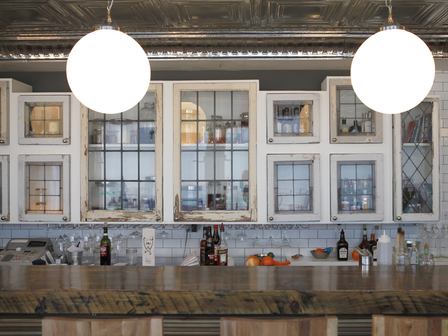 Cocktail Bar
Cocktail Bar, one of the very best places in the city to have a cocktail, is also the smallest. Up a flight of stairs from the street, this small room is warm and cozy in the winter and light and breezy in the summer. Cocktails, by owner Jen Agg and manager David Greig are excellent and imaginative. The Black Hoof, her restaurant across the street, provides serious food, and Rhum Corner beside it is a little bit of Haiti in Toronto. 5/5
923 Dundas Street West, M6J 1W3 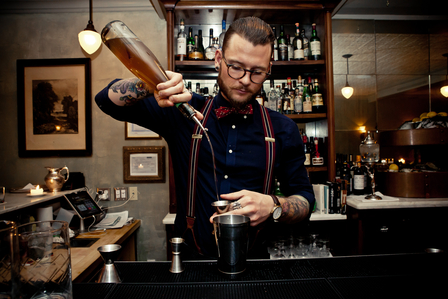 Geraldine
The green-hued walls, tin ceiling, and tile floor of this New Orleans-themed bar and restaurant harken back to an earlier time. The best seats are, of course, at the bar, where bar manager Michael Mooney and staff produce excellent signature cocktails based on the classics. One such is the Parisienne Milk Punch, based on a Jerry Thomas 1862 recipe. Food here is particularly good. 5/5
1564 Queen Street West, M6R 1A6 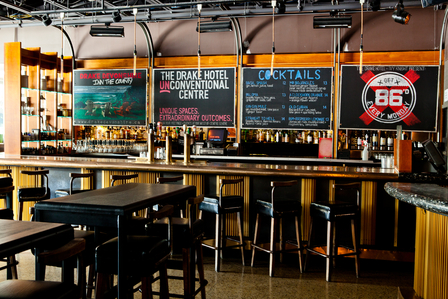 Lounge Bar at The Drake Hotel

Lounge Bar at The Drake Hotel
The opening of this boutique hotel on West Queen West in 2004 had a dramatic effect on the whole area. Probably the busiest cocktail venue in the country, its five cocktails bars fill the basement and first two floors. The standout bar is the Lounge Bar, home to probably the best bartender in Toronto, Sandy de Almeida, who, along with their other excellently-trained and experienced bartenders, serves great cocktails. 5/5
1150 Queen Street West, M6J 1J3 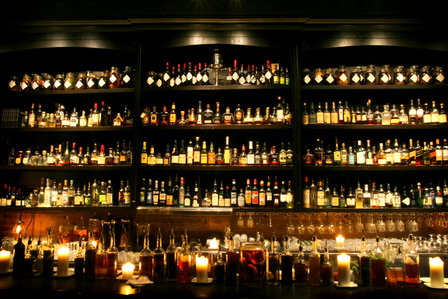 Barchef
In Barchef, Frankie Solarik presides over the one Toronto bar that specializes in "Modernist" cocktails. Because of the extensive use of house-made syrups and bitters, cocktails here have a unique taste profile, rather luscious and a bit over-the-top. The creativity and imagination that go into each one of them is undeniable. 5/5
472 Queen Street West, Toronto, Ontario. M5V 2B2 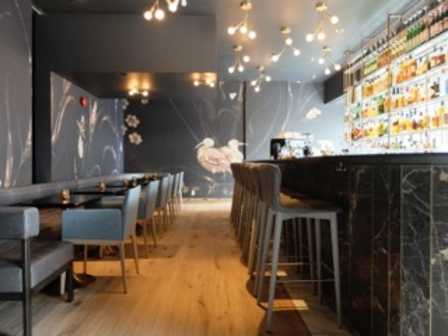 The Bar at Alo

The Bar at Alo
Through a doorway and up a small elevator lies this modern, free-standing bar that may seem more at home in London or Tokyo. Bar manager John Bunner has assembled one of the best bar teams in the city, with drinks chosen from a short menu of six made-to-order and two bottled cocktails. Serious foodies may want to indulge in the multi-course prix fixe menu in the attached French restaurant. 5/5
163 Spadina Avenue, 3rd Floor, M5V 2L6 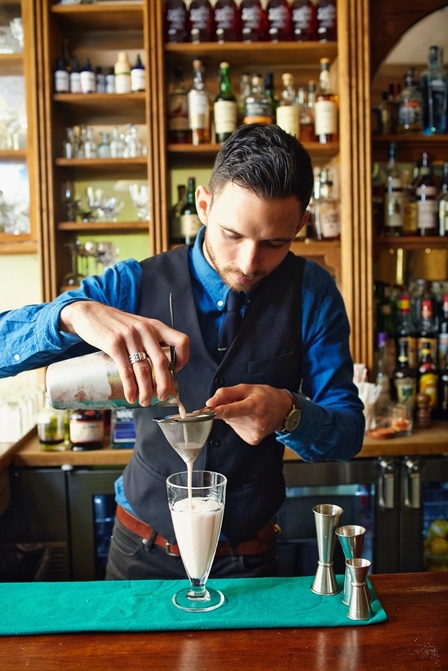 Bar Isabel
This College Street version of a Portuguese taberna is always busy, with its menu emphasizing tapas, cheeses, house-cured meats, offal, and seafood. Cocktails are divided between Fresh and Sturdy. Unusual in Toronto, the kitchen is open until 2 am. 4.5/5
797 College Street, Toronto, Ontario. M6G 1C7 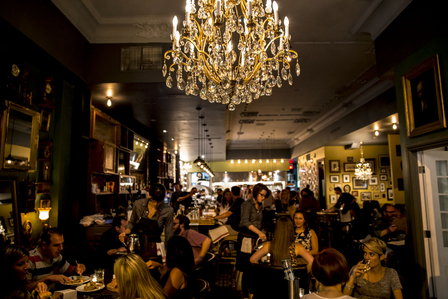 The Good Son
The Good Son is a neighbourhood restaurant with excellent food and great cocktails by bar manager Moses McIntee. The large room with high ceilings is decorated eclectically with groupings of clocks, plates, pictures, and mirrors. The cocktail menu is divided into House, Aged, Spring (seasonal), and Temperance cocktails. 4.5/5
1096 Queen Street West, M6J 1H9 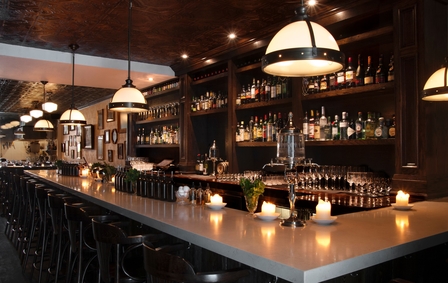 Furlough
Furlough is the second bar/restaurant by Frankie Solarik and Brent Vanderveen of Barchef, and uses many of the same house-made syrups and bitters. Thus, the taste profile is similar to that of Barchef, albeit a bit lighter. It is in the Contemporary cocktails that they shine the brightest, though, to have the best experience, it helps to allow yourself to enter into their taste world as most of the cocktails might seem slightly sweet otherwise. 4/5
924 Queen Street West, M6J 1G6 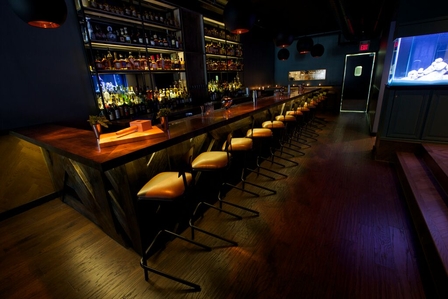 Rush Lane
Open barely a year at the time of this writing (August 2015), Rush Lane is already an industry favourite. It is long, narrow room painted in cool tones of grey and green, with a raised "library" area containing an aquarium across from the bar. The cocktail menu is divided into in-house creations and classics, with a small contribution from the lab in the back of the bar. 4/5
563 Queen Street West, M5V 2B6 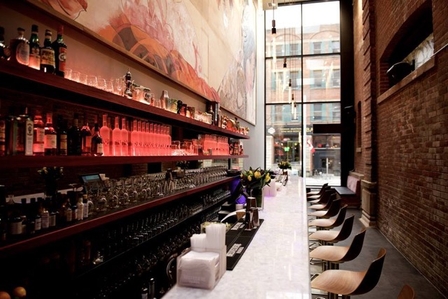 Barfish
With its dramatically high ceiling, two-story front window, brick walls, Asian mural, and granite-topped bar running the length of the room, Barfish can lay claim to being the prettiest bar in Toronto. Cocktails are mostly Asian-inspired to accompany the cuisine of Blowfish next door. This is an excellent place to taste sake, including some that are made for them by a local sake-producer. 4/5
668 King Street West, M5V 1M7 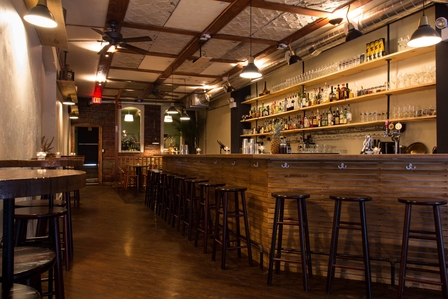