Photography by Nikki To & Daisy Tulley 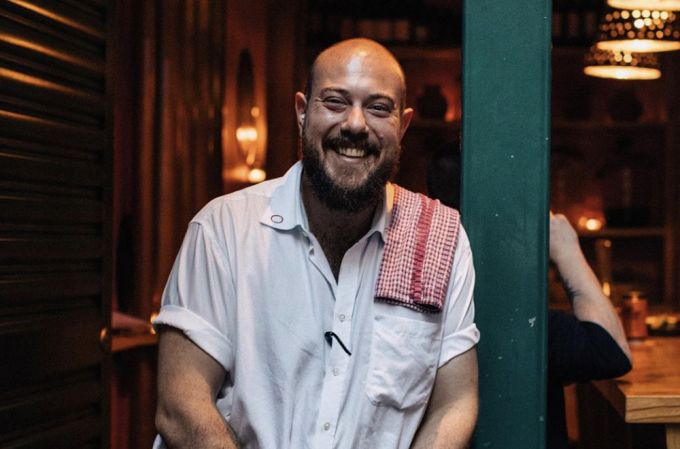 Working across two of Sydney’s most famed tequila and mezcal destinations, Tio’s Cerveceria and Cantina OK!, Alex Gilmour is our go-to agave expert. He lives and breathes this stuff and makes, without doubt, the best Margarita you can buy. Friend’s call him Happy, and seeing as this is an article about making Margaritas, we’re all about to be great friends so that’s what we’ll refer to him from now on.

Margaritas make you happy. Truth. It’s almost impossible to see a Margarita going out in a bar and not order one for yourself. That’s just the way this good-time drink works. But how about making one? There’s a lot to get right, from the freshest of limes to the flavour profile of your tequila, from the size of your ice, whether you’re serving it up, down or blended, to which sweetener and how much salt you add. So grab and notebook and pen, we’re heading back to school to learn how to make the best Margarita at home from Happy Gilmour himself. 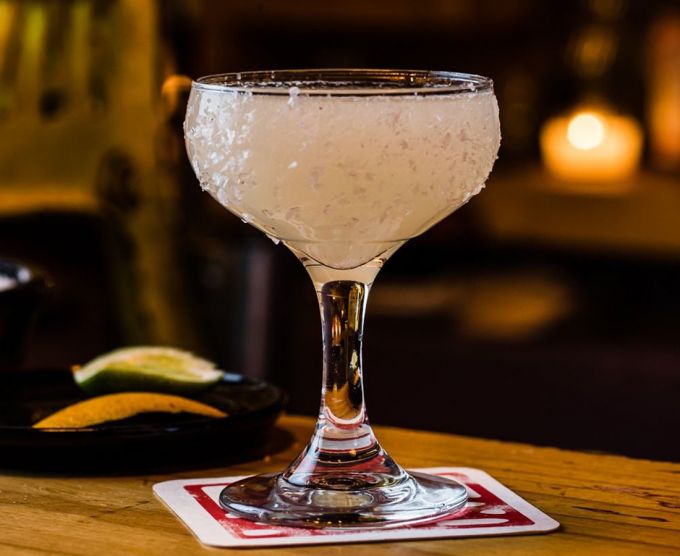 “The key essential ingredient for anything we do, and what Jeremy (Cantina OK and Tio’s owner) has taught me to focus on, is fresh citrus. The guys at Milk & Honey in New York did a citrus test where they juiced limes, lemons, oranges and grapefruits and tasted it fresh, an hour old, at the end of a shift and 24 hours to see when it tasted best. Lime in a Margy tastes best when it’s fresh – it’s just true, you can taste the difference, so that’s number one for me,” says Happy.

There will be small differences depending on what limes you’re working with, explains Happy, and where they’ve come from. In Australia we import limes whenever they’re out of season here to keep up the supply and there are subtle differences you’ll taste between Aussie limes, Californian limes, Mexican limes, Tahitian limes and key limes. “They’re all so flavourful in their own subtle ways” says Happy.

KEEP THE ICE SPECKS
When you shake a cocktail (like really give it a good welly in the shaker with some properly sized cubes of ice) you should have little ice shards speckled throughout the drink. Some bartenders will advocate fine-straining, or passing your cocktail through another tightly-meshed strainer, to get rid of these. When it comes to a Margarita, however, Happy says don’t do it.

“There was a time before I started working at Tio's where I did fine strain, and this is something we talked about for ages. We don’t fine strain at Tios. It’s about the vibrancy of the drink and there was a time where every drink was so fine strained, so clean and even the style of bartending was so clean that it wasn’t the party vibe. And Margaritas are a party drink. The vibrancy comes through on those ice speckles that you get with a single strain – as long as it’s not chunks, make sure you’ve got a closed gate on your hawthorn strainer – but it just tingles on your teeth, dances, dilutes a little bit so it starts quite sour and you’ve got that great kick of a Margarita and by the end of it, if you haven’t finished it in two gulps, it’s that little bit mellower and you’re ready for another one, so it’s a progressive drink with you.”

When it comes to the ice you’re shaking over it’s important to have good quality, larger cubes. You can achieve this in your home freezer by buying silicon moulds but if you’re lacking these Happy has a great tip for you; “freeze a tuppaware container full of water, and once it’s turned into ice crack it carefully into large chunks and make Margarita pitchers. Just add some chilled water to your mixture to allow for the dilution you achieve with shaking, pour all the ingredients into a pitcher for 5 people or so and give it a stir.” 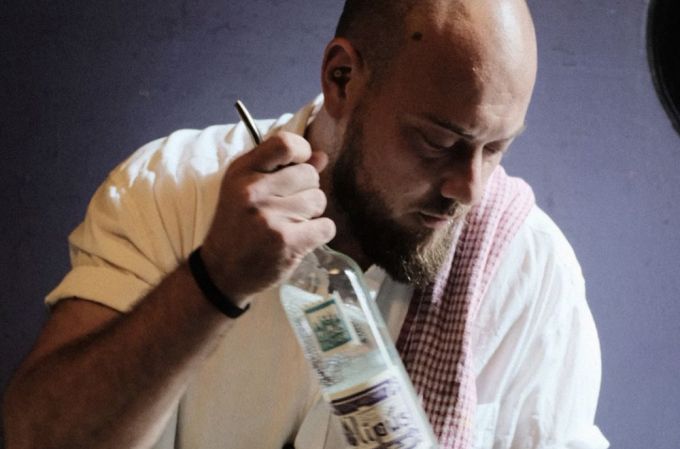 “I think this is essential for anyone who wants to drink agave products; drink a good product,” says Happy.

The same goes for understanding your preference for tequila – do you like them peppery, floral, herbaceous? Not all tequilas taste the same and the Margarita's brilliance is that it’s a cocktail which lets the spirit shine so you will taste it. “If you’re going to make it with a bad tequila, a tequila that doesn’t hit your flavour profile, one that you don’t like, then you’re not going to like the Margarita. If you want to make a Mezcal Margarita and you don’t like smoke then you probably shouldn’t make it with mezcal,” says Happy.

“I don’t want something fully filtered, too clean, and I don’t want something that’s really raw and brash because they both take away too much from the cocktail. I don’t mind overproof either, I think overproof Margaritas are really fun. The couple of overproof tequilas we have in Australia are all really tasty, Tromba 55, the still-strength Fortaleza, Tapatio 110,” he says.

ADDING FRUIT
“These styles of drinks, where it’s citrus, liqueur or modifier, spirit and sugar, are really fun because you can play with them really easily with just fresh fruit,” says Happy. “See what’s in season and and simply shake it through with the cocktail. Scoop out passion fruit flesh, watermelon, plums – whatever you like, but here you’ll need to fine strain if you’re drinking your Margarita in a coupe. Weirdly pulp bits tend to matter less if you’re drinking your Margarita on the rocks as they settle to the bottom. Blood plums are amazing for this right now, so definitely give them a go.” 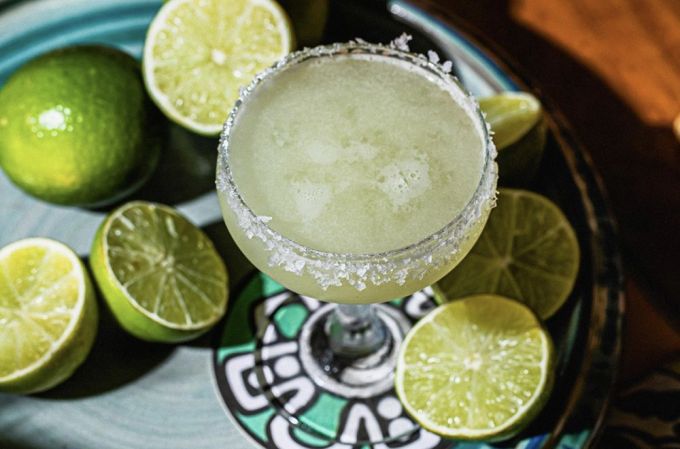 Margarita at Tio's Cerveceria, image by Nikki To
Margaritas are traditionally made with an orange liqueur as the sweetner, although the trend has been to move away from this and use the likes of agave syrup. If you’re going traditional, Happy recommends using triple sec for those with a drier palate. “I quite like Grand Marnier, but it’s too sweet for most people. I’ve got a sweeter palate. At Cantina OK! we use orange oils, with just a zest on top that’s discarded. We don’t use any Cointreau or triple sec specifically because orange actually comes out on the nose really well, it just brightens it, and we don’t find any need to add more.”

UP OR DOWN, SOME SALT, NO SALT, SLUSHIE
“Glassware is important with every drink, I don’t want to put one in a glass that comes up half way. But I’d happily drink a classic on ice with or without salt. I don’t think salt is be all and end all. Go 50/50 on the rim so the drinker has an option and only ever use flake salt. Rock salt hurts teeth, table salt is shit and iodized salt is bad for you. If you want to brush up on the topic read Salt, Fat, Acid, Heat.”

How about blending your Margarita? “I’ve got no problem with slushie Margarita, but half the time blended drinks suck. You need 50% more sugar to bring those flavours over the dilution and none of us want that. At Cantina OK! we use a shaved ice machine that creates a texture almost like a slushie that we serve the Margaritas over. It shouldn’t hold it’s own weight but it should hold its own character, and when you’re finished it there will still be a little bit of ice in the cup. It’s perfection – but that’s something you can only get at the bar. At home just shake it and strain it,” he says. 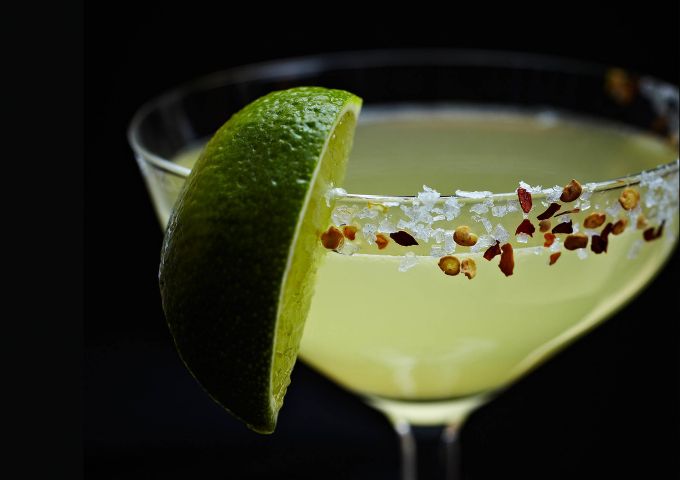 ... comment(s) for Mastering the Margarita with Happy (Alex Gilmour)