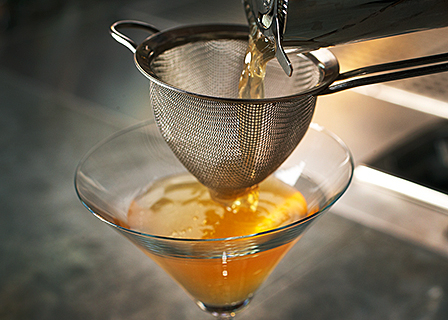 Most cocktails that are shaken and served ‘straight-up’ (without ice) benefit from an additional 'fine strain' over and above the standard strain to remove small fragments of fruit and fine flecks of ice which rise to the surface so spoiling the appearance of a drink.

The quantity of ice fragments collected in each fine strain can be equivalent to 8ml of water, or the best part of two barspoons of over-dilution - prevented from contaminating the drink.

Fine straining or double straining, as it is sometimes known, is a relatively modern invention which I believe originated in London during the 1990s. It is achieved by simply holding a fine sieve, like a tea strainer, between the shaker and the glass.

Some, including Keven below, argue that this practice removes air trapped in the liquid, so affecting mouthfeel and reducing the thickness of any foamy head. Rest assured, the holes in the strainer are small enough to capture ice crystals but not air.

Try shaking two cocktails in the same shaker and fine straining one and not the other. The result, no perceivable difference other than those ice shards interfering with the mouth-feel of the unstrained drink. Try the above test again, this time with a cocktail containing egg white. The majority of the foam passes though the fine strainer with no perceivable reduction in head gracing the fine strained cocktail. 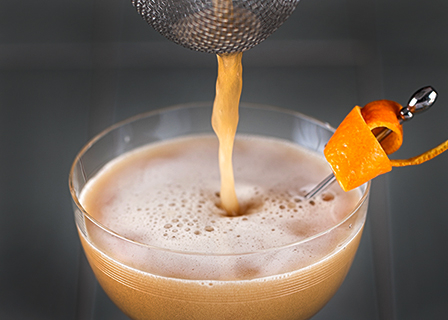 I am not going to defend the use of ridiculously small strainers with overly fine sieves, which appear to be used mostly by bars that make lots of muddled strawberry drinks. Yup, the poorly equipped fools will be there all night trying to push the last ounce of liquid through the clogged strainer. (Cocktail Kingdom sell ideally sized strainers with medium mesh.)

And yes, some fine strainers appear never to have had a proper wash but mainly in such bars where the fruit was probably cut on a black cutting board. Anything can be unhygienic - I share an office with Dan.

It is indisputable that fine straining improves the look of a shaken drink served straight-up and removes ice shards that would otherwise melt in the drink and add dilution. It also demonstrates the desire to try that little bit harder to make the perfect drink. The argument against revolves around retention of microscopic air bubbles in the drink and any shaken drink will 'clear' with time as air bubbles dissipate, whether fine strained or not. However, for a balanced view please consider Kevin's opinions below.

Why not to fine strain by Kevin Armstrong

If you pass the words 'fine strained' through a fine strainer, you might be left with the letters FTAD, rearrange those and you get the word daft. My intention is not to trivialise this oft used technique as fine straining does indeed have its uses, although the proliferation of the technique would imply it is essential to good drinks making; this I'm afraid is just not true and I would argue it can work to the detriment of a drink.

When shaking a cocktail you do a number of things to it; you mix and chill the ingredients, add water through dilution but also, and most importantly, you inject a degree of 'life' or aeration. I believe it was once recommended that you ought to consume your drink whilst it is still 'laughing at you'; this 'life' or 'laughter', particularly in a shaken drink, is only captured within the first few moments, when the cocktail is poured. Passing a cocktail, such as a Daiquiri or a Cosmopolitan through a tightly meshed fine strainer removes this life before the drink has even reached the glass and it is with this that I hold umbrage. 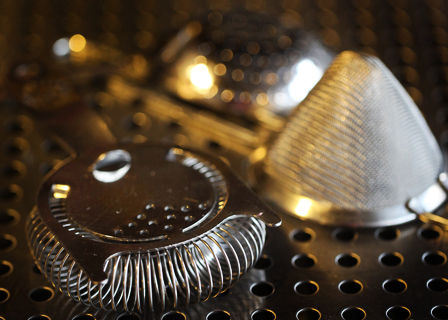 Using a fine strainer changes the texture of a drink giving shaken drinks a more velvety feel, a texture often reserved for and associated with stirred cocktails. After 5 minutes in the glass, you'd never know if a fine strainer had been used or not but the difference in that magical first sip, as the bubbles dance on your tongue, is precious and worth savouring.

If a fine strainer is used to remove unwanted ice shards, I would argue an adequately deployed Hawthorn (perhaps with second spring) would be sufficient, but the odd ice shard as it melts on the tongue can also be pleasant.

Aside from this, fine straining every drink (as bartenders now seem to do) simply takes too much time and is often unhygienic as they are prepared to use just about anything (even keys!) to force their concoctions through the mesh. It is by all accounts an unnecessary affectation and should only be used to filter fruit seeds, pulp or detritus that cannot adequately be removed by standard strainers.

Also, not that it is a line I would like to pursue, but the lack of historical reference for the use of the fine strainer, also indicates that it is a modern stylistic artifice.

I recently witnessed a bartender fine strain a Gin Martini; can anybody tell me why? I think it's just a matter of time before we hear 'Can I fine strain your beer sir'?