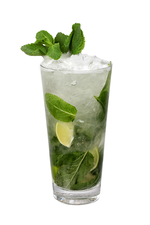 The internet powers-that-be have appointed 11th July Mojito Day - and who are we to argue? The Mojito is one Cuban classic that's just made for a hot summer's evening – it's one of the world's best-selling cocktails and this popularity has proven enduring.

It's also one of the older long drinks in any bartender's repertoire. The Mojito's ancestor, a Draque - a blend of aguardiente, sugar, lime and mint - reputedly debuted in 1586. And, whether you opt for the humble spearmint, apple mint or grow your own Mojito mint, its descendant is a great, refreshing summer drink.

Now, if there's one flavour that really sums up summer to us, it's elderflower. And you'd be amazed what a slug of a good elderflower liqueur can do for a Mojito. So, crack open a bottle, mix up an Elderflower Mojito, and raise a glass to whoever invented Mojito. Oh, and if that mention of 1586 aroused your interest, then you should read our page about the origins of the Mojito.

According to the United Nations, world population hit 7.7 billion in 2019. That's an awful lot of people!

Only two centuries ago, the globe held under a billion people, and most estimate we'll be up to around nine billion within 30 years. Almost all of this growth will occur in the sprawling, choked cities of the developing world, leading to an immensely crowded planet and increased pressure on scarce resources.

Cheery stuff, isn't it? So the UN has designated today as World Population Day, a time for us to reflect on issues concerning, well, population. Us? We'll be taking the edge off our anxiety with a Baby Guinness, a blend of two classic shooter liqueurs that looks, well, exactly like a miniature pint of Guinness.

It's also the anniversary of Donald Bradman's 309

This remains the highest score by a batsman in one day. At the end of his innings, he had scored 334, the first of his two triple centuries. For many, Bradman is the greatest batsman of all time - when he retired in 1948 he had an incredible batting average of 99.94, still way beyond what any batsman has achieved since.

In memory of Bradman's extraordinary cricketing achievement, and his two triple centuries, today we are drinking a Triple C Cocktail.