Anniversary of the sub 4-minute mile 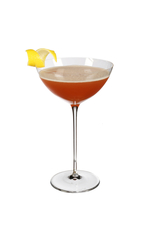 This day in 1954, Sir Roger Bannister set a world record for the mile, also becoming the first man to run the mile in under four minutes, covering the distance on a slow track with difficult crosswinds in 3 minutes 59.4 seconds.

What's most amazing about this feat, in an era when the record is over 16 seconds faster, is that Bannister wasn't a professional athlete. Far from it. Although he worked with pacemakers and a coach, he was a medical student, working in a hospital. He trained in his lunchbreak and at weekends - and even went into work the morning that he ran the record-breaking mile.

Without nutritionists, sports psychologists or intensive training, he ran faster than any man had ever run before - and then hung up his custom-made running shoes and built a career as a pioneering neurologist, an academic and President of the Sports Council of Great Britain.

Today we're drinking to Bannister's achievement with a Three Miller.

Waltzing Matilda, a one-time-contender for Australia's national anthem – was performed for the first time this day in 1895 in a Queensland pub.

Written by Banjo Paterson, the nation's favourite poet, the ballad tells the rather dark tale of a travelling bushman making himself a cup of tea by a billabong before a lost sheep wanders by. Delighted by his good luck, the traveller seizes the sheep to eat but before he can tuck into his still bleating dinner the landowner and three policemen rock up. Rather than be caught for poaching, the protagonist drowns himself in the billabong which is haunted by his ghost forevermore. But best not to mention that to the primary school children who sing this ballad so enthusiastically. Bless!

In fact, thanks to its rural 1800s Australian slang, most people would be hard-pressed to translate the story these days. There's jumpbuck for sheep, squatter for the landowner, swagman for the traveller and even the title loosely translates as travelling with a swag.

Despite its grim tale, the song has become an icon of Australia, with performances at major sporting events and its lyrics even used to decorate passports. Folk love an underdog and the spirit of the bush, so today, to mark its very first performance we're enjoying a Oye Mi Canto, which translates, not from bush slang but Spanish, to 'Hear My Song'.

It's also the Heart-Lung Machine's birthday

On this day in 1953, Doctor John Heysham Gibbon removed the heart from an 18-year-old girl and connected her, instead, to a machine. She lived.

And so, in her footsteps, have followed hundreds of thousands more. Before Gibbon's invention, heart surgeons had to operate on a moving, beating, blood-filled heart, with all that that entailed - many heart conditions were simply fatal. Gibbons had spent almost twenty years designing his machine, which functioned as both heart and lungs, by taking deoxygenated blood from the body, filling it with oxygen, and then pumping it back in. But, after two children died in surgery later in the year, he abandoned his research, and left it to others: a smoker, Gibbon would himself die of a heart attack.

We are toasting Doctor Gibbon, and his great invention, with a Doctor Cocktail, based on Swedish punsch, a liqueur that's undergoing a long overdue revival.

... comment(s) for Anniversary of the sub 4-minute mile