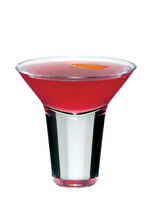 Thankfully there's no regulation or any other hindrance to anybody anywhere declaring a 'National Day' or even an 'International Day' to celebrate whatever they like. This has been embraced by our friends in America where back in 2015 somebody declared this day to be National Cosmopolitan Day. Hoorah!

You've got to love America because, incredibly, the above joint day celebrations follow "National Beverage Day", observed annually on 6th May. So, we are toasting America and its many and varied "National Days" with a Cosmopolitan Cocktail first created, appropriately, in America.

It's also the day an Earthquake demolished the dome

If you've ever visited Istanbul's monumental Hagia Sophia, you may have wondered how its extraordinary dome stays up. Well, it hasn't always, because on this day in 558 it collapsed during an earthquake.

Legend has it that Emperor Justinian was inspired to build the dome following a visitation by an angel in a dream. It was to be higher and wider than any previously built, and held aloft with a minimum of support to create the illusion of floating.

Today we're drinking a Fallen Angel as we think about poor Justinian standing amid the rubble of his angel-inspired dome.

It's also the anniversary of the first Presidential Inauguration Ball

On this day in 1789, George Washington, who had been sworn in as the first ever president of the newly independent United States a week earlier, attended a ball held in his honour.

This set the standard for a tradition of inaugural balls, now a major feature (and money-spinner) of every US election. Current presidents seem to prefer slow dances to the minuets that were danced centuries ago, and, thanks to modern transportation, put in appearances at many different events over an evening.

History neglects to record what George Washington actually drank on this auspicious occasion, though we figure the punch bowls will have been overflowing. We shall be opting for a marginally more modern drink, a President, our adaptation of a classic from Harry Craddock's 1930 The Savoy Cocktail Book. It is a delicate orange Daiquiri with a hint of extra fruit.

Today's also the anniversary of the Pontiac's war

Ever wondered where the car name Pontiac came from? These iconic movie rides, seen in Tarantino's oeuvre as well as Knightrider, Transformer and decades' worth of pop videos, take their name from a town in Michigan, now part of Detroit. This, in its turn, takes its name from a Native American warrior and general who rose up against the British and French forces on this day in 1763, starting a war best known as Pontiac's War.

It was an ugly war: some of the Native Americans ritually cannibalized soldiers; while British forces deliberately infected their opponents with smallpox using blankets that had been used by the sick. The war would last over three years and end in a stalemate; Pontiac would later be assassinated by a member of a different tribe.

In memory of this iconic period in the founding of the Land of the Free, we are drinking a Mayflower Martini.