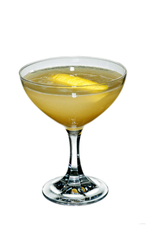 The saint best known as Santa Claus died today more than 1,600 years ago, and in many parts of Europe children will wake up to gifts from the man himself this morning. About all that is known of Saint Nicholas is that he was Bishop of Myra, in Turkey. He is supposed to have restored burned children to health, saved falsely accused men from death and innocent girls from slavery.

When he's not tending to children, St Nicholas maintains quite remarkably broad interests - he's the patron saint of brewers, bottlers and wine merchants, not to mention murderers, prisoners, prostitutes and virgins. As Santa Claus, though, he is an invention of 19th-century America - it was American poets, writers and illustrators who transformed the fiery Middle Eastern bishop into the cuddly, red-suited, reindeer-chivvying chap we know today.

We are toasting St Nick with a suitably spiritual concoction, the Nicky Finn, based on cognac, from which both saints and angels take their share.

It's also the Encyclopaedia Britannica's birthday

The Encyclopaedia Britannica, the world's biggest printed encyclopaedia, came into existence on this day in 1768, when the first three-volume set was published in Edinburgh, Scotland -- by Andrew Bell, Colin MacFarquhar and William Smellie.

Some of the world's greatest minds have written for the Britannica, including Sigmund Freud, Albert Einstein, Leon Trotsky, Henry Ford, Marie Curie and Desmond Tutu, not to mention quirkier choices such as Harry Houdini and Chris Evert.

Yet the company has moved with the times. It produced its first digital product over thirty years ago and now offers a welter of online information - up to and including mobile phone subscriptions. Today we are toasting Britannica's pioneering founders with a Highlander cocktail, based, appropriately enough, on Scotch.