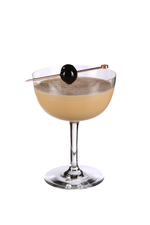 Rich, cakey squares of chocolatey deliciousness. The brownie is the baked good that we all love and today, on National Brownie Day, we get to celebrate it.

The legend goes that the first brownie was created at Chicago's Palmer House Hotel in 1893. Mrs Palmer, the wife of the hotel's owner and a prominent socialite, asked the resident pastry chef to create a small dessert with a cake-like consistency to go in boxed lunches for the ladies attending the Chicago World's Columbian Exposition. The result was a brownie with walnuts and an apricot glaze, and the same recipe is used at the hotel to this day.

However, it wasn't until the turn of the twentieth century that recipes for modern-style chocolate brownies began to appear in print, and at this time, an extra egg and square of chocolate were added, giving the brownie a richer, more fudgy consistency.

There's no better day to enjoy a Brownie cocktail. It's the perfect way to pass the time while you wait for the real things to bake.

On this day every year, Bodhi Day, the Japanese celebrate the enlightenment of Buddha, the moment at which Gautama Siddhartha, while sitting under a bodhi tree, found the solution to the problems he was confronting and achieved Nirvana.

In Japan, the festival is known as "rohatsu", or "eighth day of the twelfth month". Zen monasteries often host a weeklong ritual culminating today, and believers are supposed to meditate for the whole of tonight.

We'll be pursuing our own form of Japanese enlightenment today, with the meditative harmony of whisky and water, lovingly and calmly stirred, that the folk of Japan know as "Mizuwari", or "mixed with water", and often drink with dinner.

It's also Pretend To Be A Time Traveller Day

Fancy being a performance artist for the day? Today is "Pretend to Be a Time Traveller Day", a stroke of pure genius that does exactly what it says on the tin.

Should you wish to participate, you have three main options. Act as a visitor from a utopian future, channel the spirit of a visitor from the past, or go with any dystopian future you care to imagine, be that the world of Twelve Monkeys, The Terminator or Mad Max.

A few starting points? As a visitor from a dystopian future, you might want to opt for a wardrobe of rags and fake prison tattoos, and ask "What year is this?" As a Victorian, you might want to inspect a stranger's smartphone with an air of suspicion and fear.

Even if you're not playing the game, you really should try a Benton's Old Fashioned - one of the world's oldest cocktails enhanced by a futuristic bacon fat wash, it's virtually time-travel in itself.