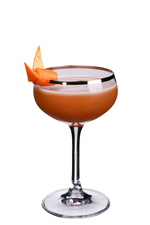 Being English we are seldom ever out without an umbrella (or brolly as we call them), and we're particular fans of the nifty pocket-sized fold-up variety. Umbrellas are certainly deserving of their own celebratory day.

So in celebration of both the great British weather (at least it gives us something to talk about) and umbrellas of all sizes and colours, we're drinking a Damn the Weather based of course on London dry gin - the dry spirit to emerge from our often damp city.

The Mary Pickford, a Prohibition-era drink from the Hotel Nacional de Cuba, is one of our favourite old-school cocktails. And this is the anniversary of the day the actress became famous enough to have a drink named after her, for it was this day in 1914 when Mary Pickford first saw her name up in lights, publicising a silent movie called Hearts Adrift.

A sign of things to come? Possibly. But since the world's AI experts have yet to build a computer that can hold a natural conversation, our Terminator nightmares may take a while to come to fruition. In the meantime, in honour of Deep Blue, and all its scarily intelligent descendants, we are drinking a Blue Moon.