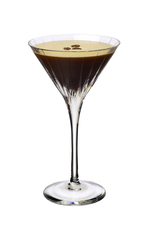 For some, today is National Kahlua Day but we're proudly more inclusive so we're celebrating what we call International Coffee Liqueur Day with a Espresso Martini.

Today is about raising awareness for their perilous situation as the ice recedes, leaving them with less land and, therefore, less food. So today politicians and environmentalists campaign for everyone to use energy more conservatively and lessen our carbon footprints.

For the remaining 20,000 or so bears we're marking today with a Snowfall Cocktail.

The anniversary of the first New Orleans' Mardi Gras

On this day in 1827 New Orleans held its first Mardi Gras celebration. Held on Fat Tuesday, this carnival spread from Rome across Europe and eventually to the Americas, but nowhere celebrates Mardi Gras as flamboyantly as they do in New Orleans.

French settlers brought the tradition of Mardi Gras to Louisiana at the end of the 17th century but the province's Spanish governors later banned the celebrations. However, after Louisiana became part of the United States, in 1803, the ban on wearing masks and partying in the streets was lifted. The New Orleans Mardi Gras was started in 1827 by a group of students who had experienced the carnival whilst studying in Paris.

Today groups known as krewes build elaborate floats which are paraded over the two weeks leading up to Fat Tuesday. Riders on the floats toss 'throws', usually strands of beads, at bystanders. We are drinking to Mardi Grass with a Sazerac, the official cocktail of New Orleans.

The invention of first cigar-rolling machine

Also, on this day in 1883, Oscar Hammerstein patented the first cigar-rolling machine.

The grandfather of lyricist Oscar Hammerstein II of Rogers & Hammerstein, while a young immigrant he worked sweeping in a cigar factory and progressed through the ranks to eventually edit the United States Tobacco Journal. He used the revenue he received from his patented machine to bankroll opera productions and build theatres. We are celebrating Oscar's invention with a fine cigar and a Louisville Sour, which fittingly contains tobacco liqueur.

Britain's "most haunted" house burned down on this day

On this day in 1939, Borley Rectory, officially "the most haunted house in England", burned down in a mysterious fire. A BBC investigation had found more than 2,000 examples of paranormal activity; elite society folk from George Bernard Shaw to the Governor of the Bank of England had attended seances at the house; a celebrity ghost hunter, Harry Price, had made a fortune from a book on the topic.

It was, quelle surprise, all a hoax - and had been since the very first haunting. A local child remembers setting off bells mysteriously, helping the "spirits" to play a magic piano, watching the vicar put highly-flammable phosphorus on the skirting boards and dressing up as a headless monk for night-time strolls around the garden.

All the same, we are marking the anniversary with an aptly named Precursory Cocktail, a lovely port-based concoction by Tim Philips. Gullibility is definitely not required.

What with bowing boughs, rough coughs, furloughs, hiccoughs and yachts, British spelling is tough through and through. And, though the thought makes us cringe, it's time to slough off the difficulties and plough forward...

OK. We'll stop now.... English spelling is famously and insanely difficult, and this day in 1953 the madness almost stopped, when a bill designed to simplify the dictionary made it through its second reading in parliament.

The simple spelling would have been introduced for younger children, with the aim of making reading easier. They would then, in theory, have had to move onto harder spellings later. But... it never happened. The government, convinced that the bill would pass, agreed to back a research project, which never came through. And so, we are stuck with words like the Alamagoozlum, a cocktail much easier to drink than it is to spell.

It's also the Neutron's birthday

On this day in 1932, the British physicist James Chadwick published a letter announcing the existence of the neutron, paving the way for splitting the atom and developing the atom bomb.

It is, of course, the neutron which is used to split the nucleus of an atom, enabling nuclear fission. During World War II Chadwick worked with physicists in the USA on the Manhattan Project and made the A-bomb a reality.

As we confront the prospect of ever more nuclear-armed nations, we are not entirely sure that Chadwick's breakthrough is something to celebrate. But we are lifting our spirits with a Bikini Martini, a Dick Bradsell creation named for Bikini Atoll, where the Americans tested more than twenty nuclear devices, and the swimwear which takes its name from there.