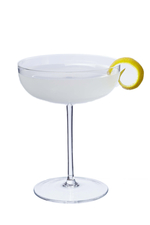 Viewing figures for the final episode of MASH broke the record that had been set by the Dallas Who Shot J. R? episode, making it the most watched TV broadcast in American history, a record it held for a remarkable 27 years.

The 256th episode, a 2½-hour long movie was entitled Goodbye, Farewell and Amen and was broadcast today in 1983 to 105.97 million viewers.

Martinis featured regularly in MASH and Hawkeye famously liked his dry: "I'd like a dry martini, Mr. Quoc, a very dry martini. A very dry, arid, barren, desiccated, veritable dustbowl of a martini. I want a martini that could be declared a disaster area." We're very happy to offer up a bone dry 7 to 1 ratio Dry Martini to MASH today, and also invite you to read to story of the evolution of the Dry Martini.

The day nylon was first produced

On this day in 1935, the invention of genius chemist Wallace Carothers, at the DuPont laboratory in Delaware, entered production. He had created a brand new fibre from coal, water and air. Nylon was not the first synthetic fabric to be created, but it rapidly became one of the most popular. Developed as an alternative to silk, it was used first in toothbrushes, then in stockings and, once the Second World War broke out, for parachutes, uniforms, bullet-proof vests and tyres.

Today, other synthetics have replaced nylon in most clothing, but it is still used in carpets, rope and, as a solid, in engineering applications. And Carrothers? A longterm depressive, he had carried cyanide around with him for years in case his sorrows became too much to bear. Only two years after his discovery, they did.

Nylon effectively killed the silk stocking. But the drink that bears its name is very much alive, and appropriately we are enjoying a Silk Stocking today.

The anniversary of the discovery of the Double Helix

With DNA now routinely used to identify absent fathers, solve cold cases and predict the occurrence of various diseases, and gene-based healing now considered a realistic technology, it's salutary to remember that the iconic Double Helix was only discovered this day in 1953.

Jim Watson and Francis Crick had been trying to work out how genetic information was stored since 1951, and, with some help from Rosamund Franklin, they finally cracked it on 28th February 1953 - and promptly burst into the local pub announcing that they had discovered "the secret of life". So, we are toasting Watson and Crick with a cocktail named for the secret of life, the DNA.

It's also the anniversary of Princess Mary's wedding

Princess Mary was the third child and only daughter of George V and Queen Mary. It was on this very day back in 1922 that she married Lord Lascelles. The wedding was, incidentally, the first royal occasion where Lady Elizabeth Bowes-Lyon (the late Queen Mother) participated.

It's said that Mary's brother (Edward VII - who later eloped with Wallis Simpson) was against the wedding because he didn't want his sister to marry someone she didn't love. It's also been suggested that Lord Lascelles only proposed to Mary after a wager at his gentleman's club...though Mary's children always insisted their parents' marriage was a happy one.

While some people think that the Brandy Alexander was created for the royal wedding, we know as a fact that the Princess Mary cocktail definitely was. The drink was invented by Harry MacElhone back in 1922, as indeed was the Princess Mary's Pride, created by Harry Craddock to also mark the occasion.

... comment(s) for The last episode of MASH was broadcast this day