With the capacity to produce two million litres of pure alcohol (6 million bottles) annually, Royal Oak is Ireland's sixth largest distillery and was the first independently owned Irish distillery to make all three kinds of Irish whiskey: pot still, malt and grain, under the one roof. 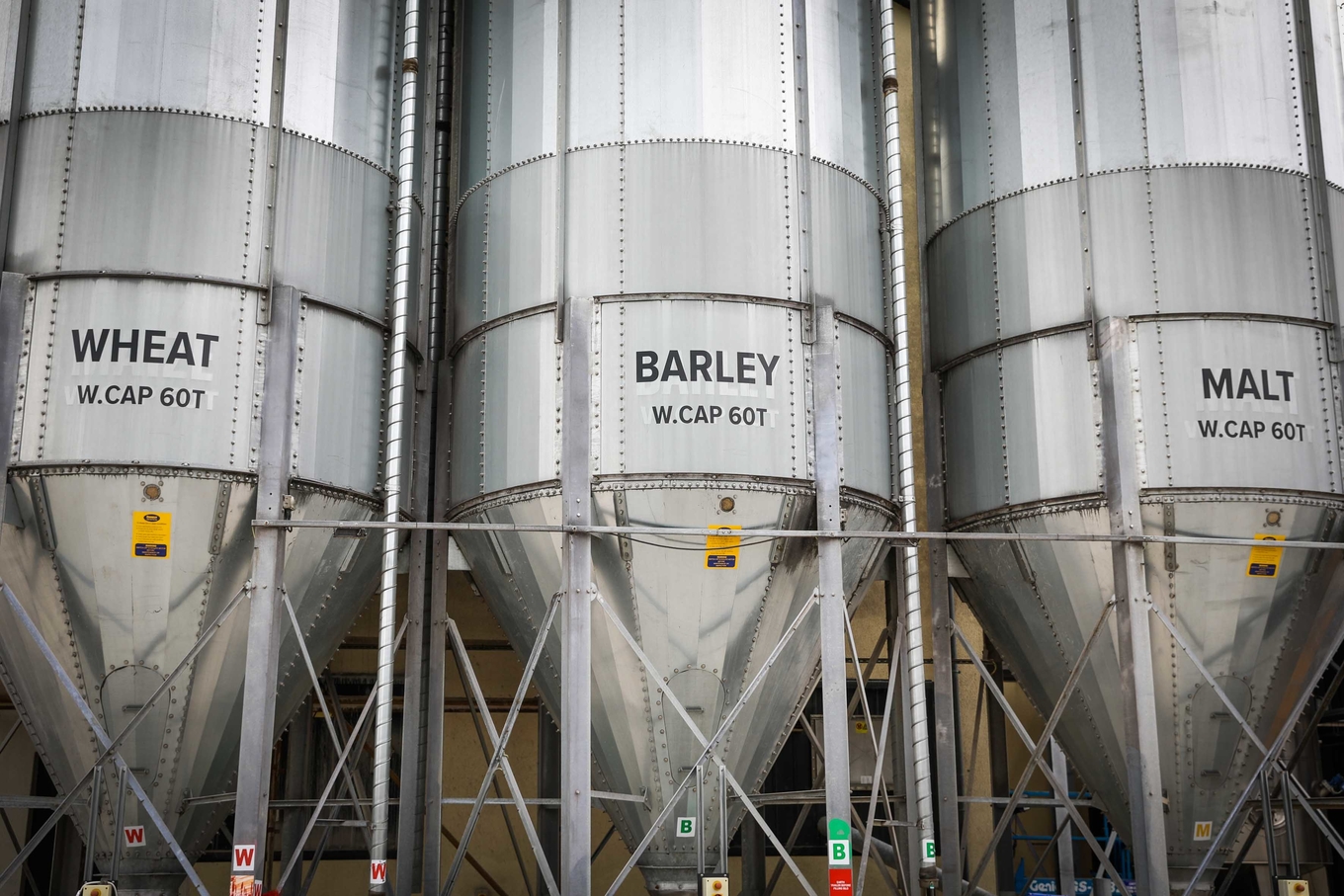 1. Locally grown wheat is held in a dedicated silo.

2. The hammer mill processes 400 kilograms of wheat per hour into fine flour. This, along with all the other processes that follow, run continuously, 24 hours a day seven days a week

3. The flour is mixed with warm water in a hydrator vessel and then passed through a jet cooker which heats it to 90°C.

4. The hot wheat water flows into a liquification tank where it stays for 4.5 hours of high-temperature cooking that bursts the starch granules so liquifying the starch and making it more accessible to the enzymes in the next process that will convert this starch into fermentable sugars.

6. The mash is further cooled to 22°C and then pumped, along with distillers' yeast, into a washback (fermentation vessel) where over 72 hours the yeast consumes the fermentable sugars to produce heat, carbon dioxide gas and the all-important alcohol. This fermentation produces a beer-like liquid at 8% alc./vol. 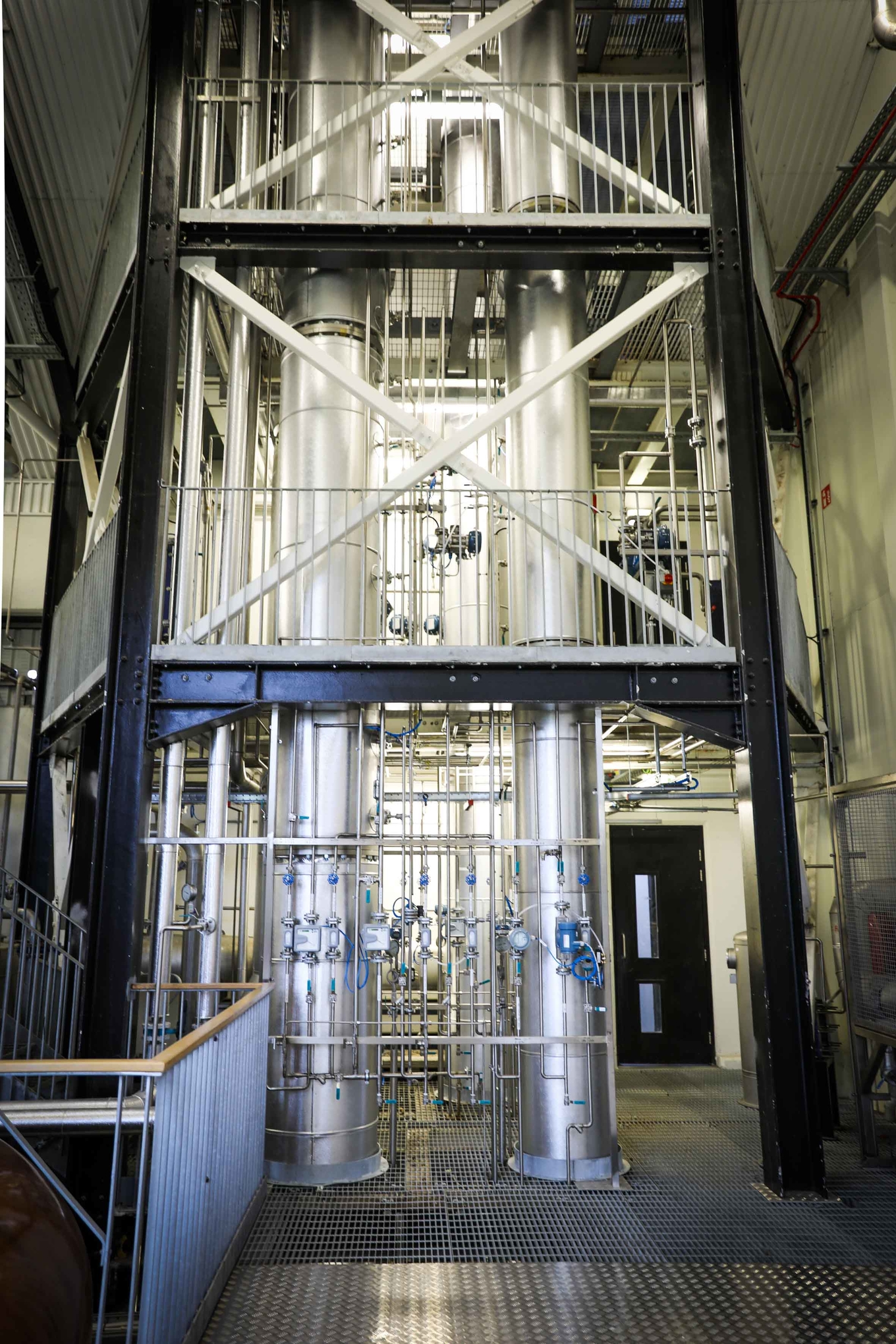 7. This beer, still containing some grain solids, is pumped into the wash (beer) column, the first of four distillation columns. This column is under vacuum and this reduced pressure allows the alcohol to vaporise at a lower temperate. Partials from the grain fall to the bottom of the still where they are removed for animal feed while the alcohol vapours rise through the still towards the next column.

8. In the second column, the Aldehydes (extractive) column, water is added to aid separation of the heads and tails which are removed.

9. The third column, the rectification column, further purifies the spirit by removing additional fusel oils and bad tasting volatile alcohols. The grain spirit leaves this still at around 94.5% alc./vol..

10. The fourth column, the tails column, processes waste from the other three columns to feed alcohol back into the system.

11. The spirit from the third column is transferred into casks to mature.

The three huge copper pot stills arrived at Royal Oak on 30th September 2015 from Forsyth in Rothes, Scotland, the world's most experienced whisk(e)y still makers. Each still weighs between four and five tons with the largest, the wash still, 6.50 metres tall with a capacity of 15,000 litres. These three stills are used to produce both pot still and single malt whiskeys using the following process.

2. The barley (malted of unmalted) is ground into a rough flour called grist using a roller mill.

3. The grist is used to fill the mash conversion vessel where it is mixed with water at 64.5°C. Here the naturally occurring enzymes in the malted barley start to convert starch into fermentable sugars. 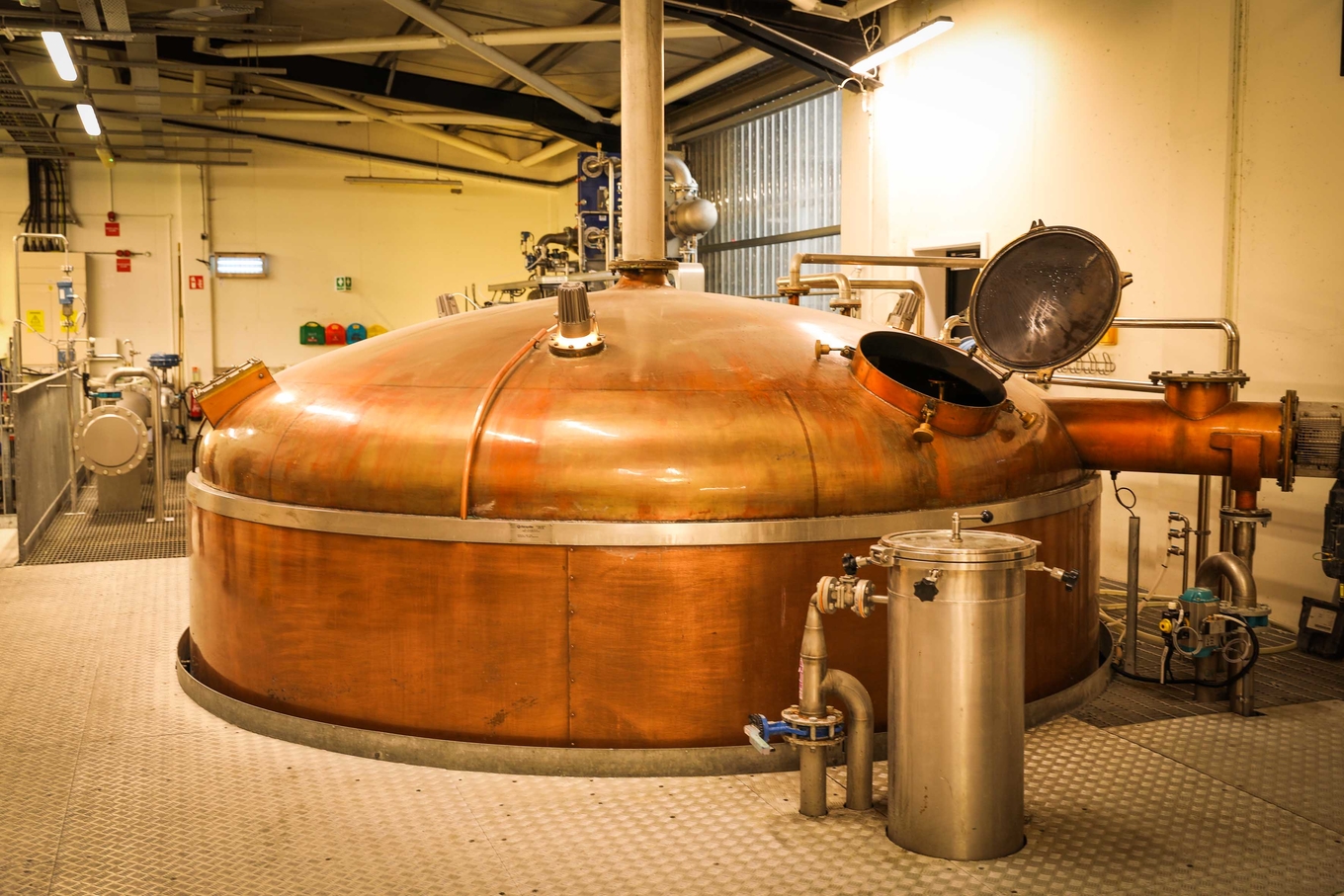 4. The barley and water mix is pumped into a mash tun which has a floor that works like a sieve to separate the sugary barley water, called wort, from the barley solids. Once drained the mash tun is refilled with hotter water, called sparge water to extract even more sugar from the grain. This is repeated with a third water. The wort made from the first two fills goes on to charge the fermenters while the result of the last sparge is used to mix with the next batch of grist. The spent barley left in the mash tun is sent to local farmers for cattle feed. 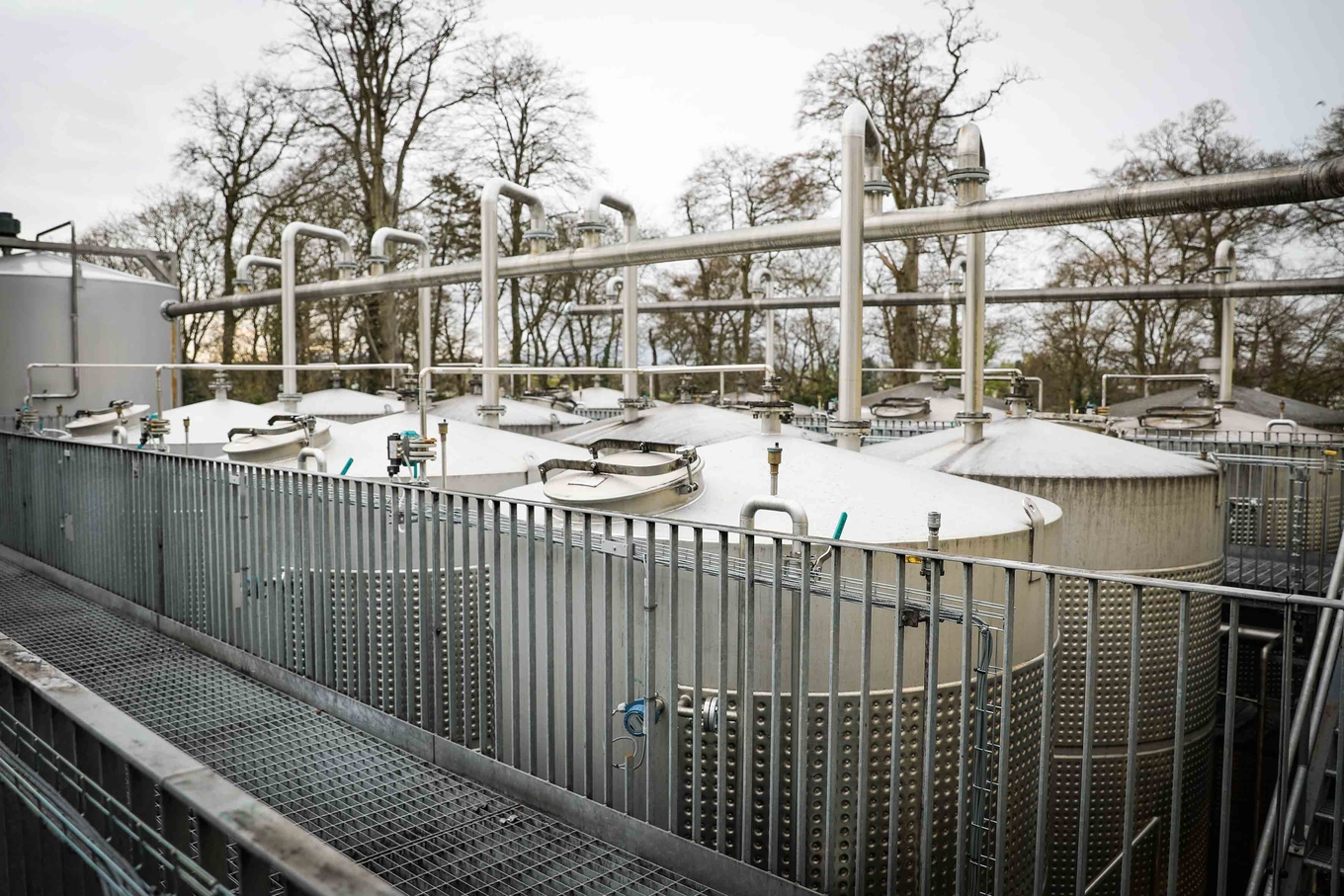 5. The sugary wort is pumped, along with yeast, to fill one of the washbacks (fermentation vessels). Fermentation lasts around 72 hours to produce a beer-like wash with a minimum 8% alc./vol.. 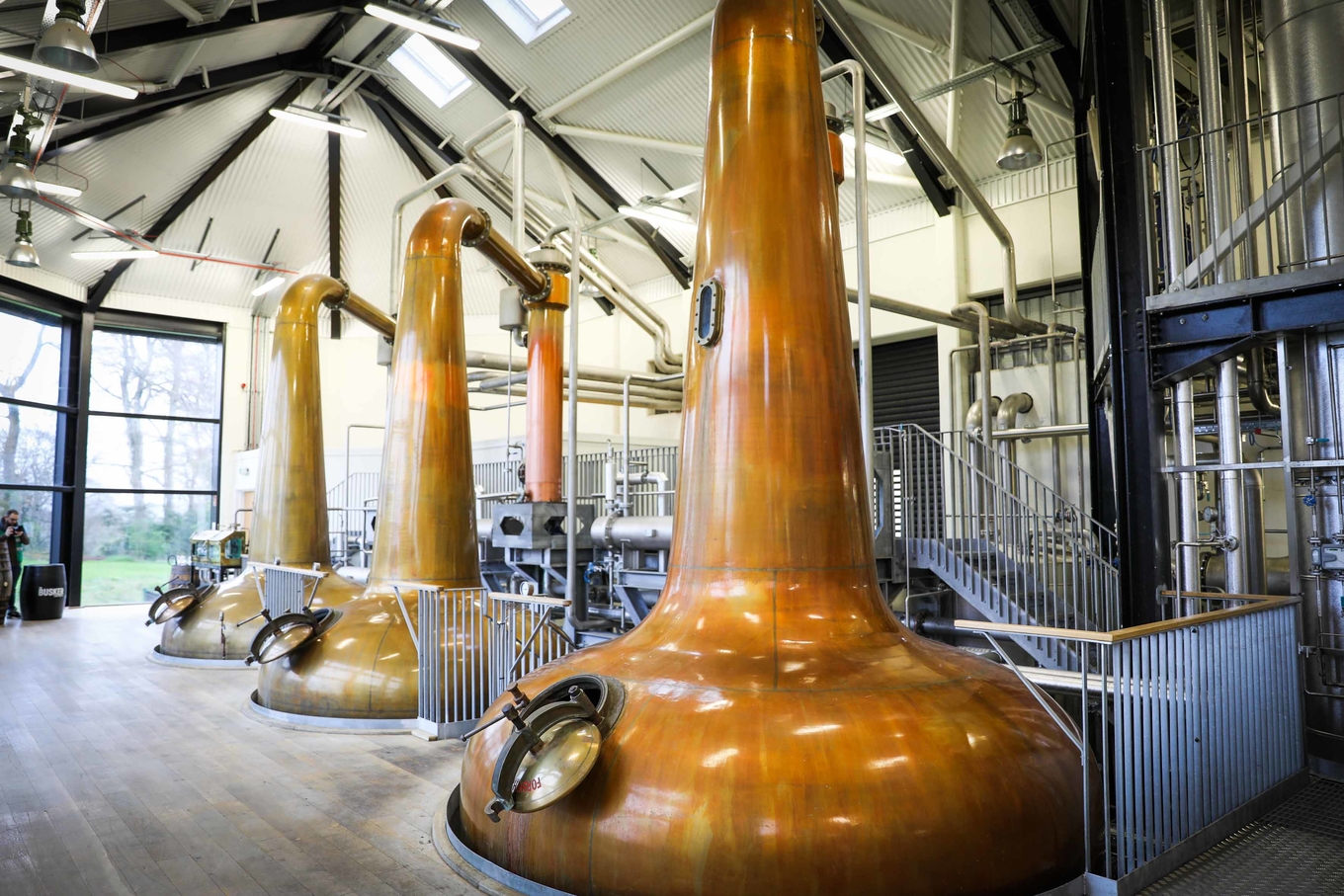 6. The wash is used to charge the first of the three copper pot stills, called a wash still. Here heat causes alcohol to vaporise and rise up the still and to the condenser where is emerges via the spirit safe as a clear spirit. The 1% alc./vol. left in the still is called pot ale and this is sent to be processed into pig food.

7. The spirit from the wash still moves to the second "intermediate" still where rectification starts with the separation of heads and tales from spirit. The heads and tails are recycled and added to the next batch of wash still spirit while the rectified spirit moves on to the third still.

A quality water source is essential for distillation and the water used at the Royal Oak comes from the Barrow Valley Aquifer, a natural groundwater reservoir holding 200 million cubic meters of water.

The cooling water was originally drawn from the River Barrow but to save impact on this precious resource and to alleviate potential issues during summer months when water levels are low, a cooling tower was installed early in 2022 so this is now a closed system and cooling water recycled. 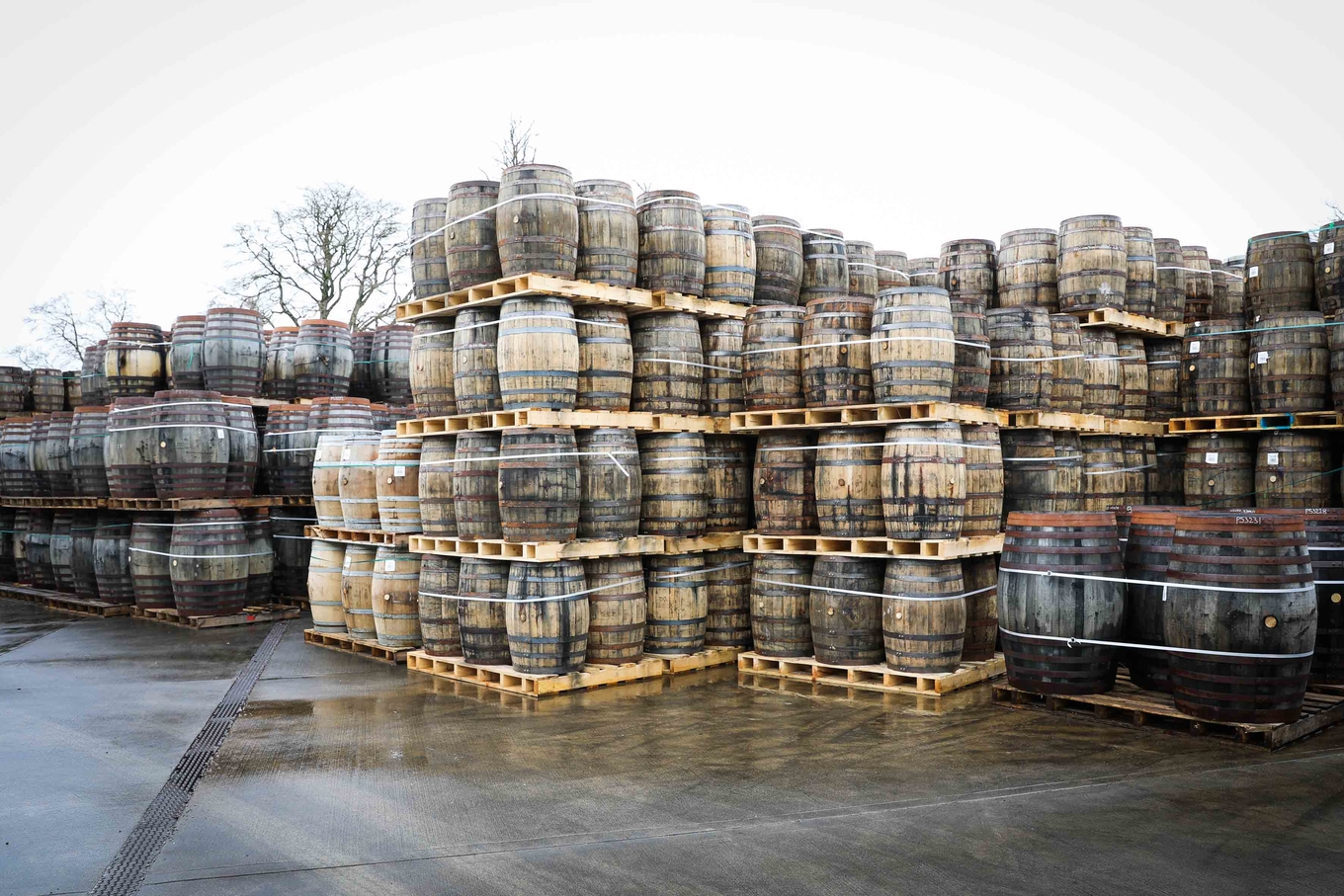 To be called Irish whisky, the spirit must mature for at least three years in oak casks and like all other Irish distillers at Royal Oak they use ex-bourbon barrels along with some sherry-seasoned casks and even maderia seasoned casks. However, Royal Oak is distinguished by its use of marsala seasoned casks. 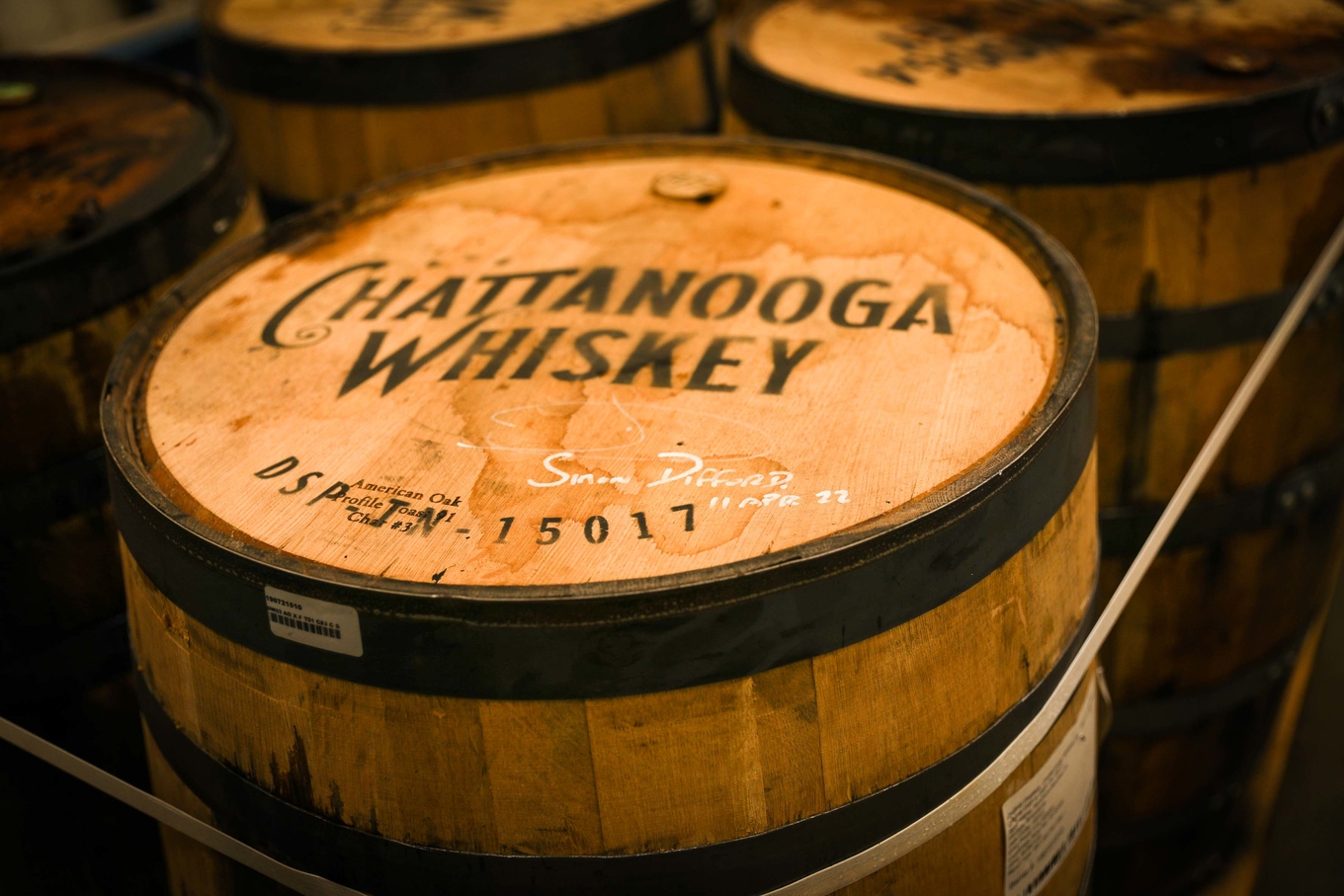 Established in 1833, Cantine Florio is the original producer of Masala wine and still produces more than 80% of Superiore quality marsala. Well-seasoned marsala casks used to mature marsala in marsala cellars seldom leave their Sicilian home but Cantine Florio is also owned by Ilva Saronno so giving the team at Royal Oak unparalleled access to a steady supply of marsala casks. 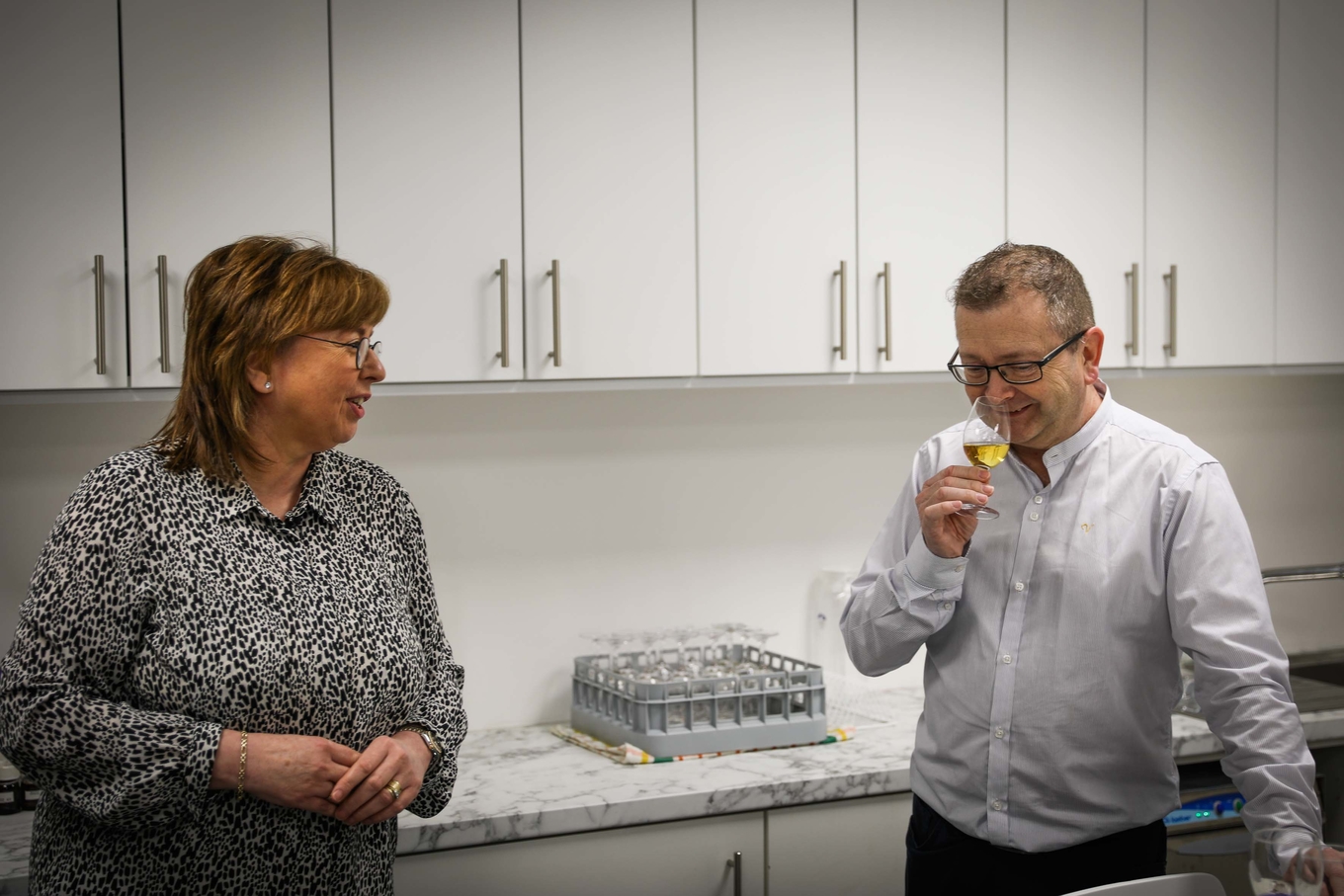 The all in-house care taken over distillation coupled with ageing in a wide variety of different cask types, most notably marsala, and the expert blending of the three different whiskeys aged in different casks is what sets the whisky made at Royal Oak apart. 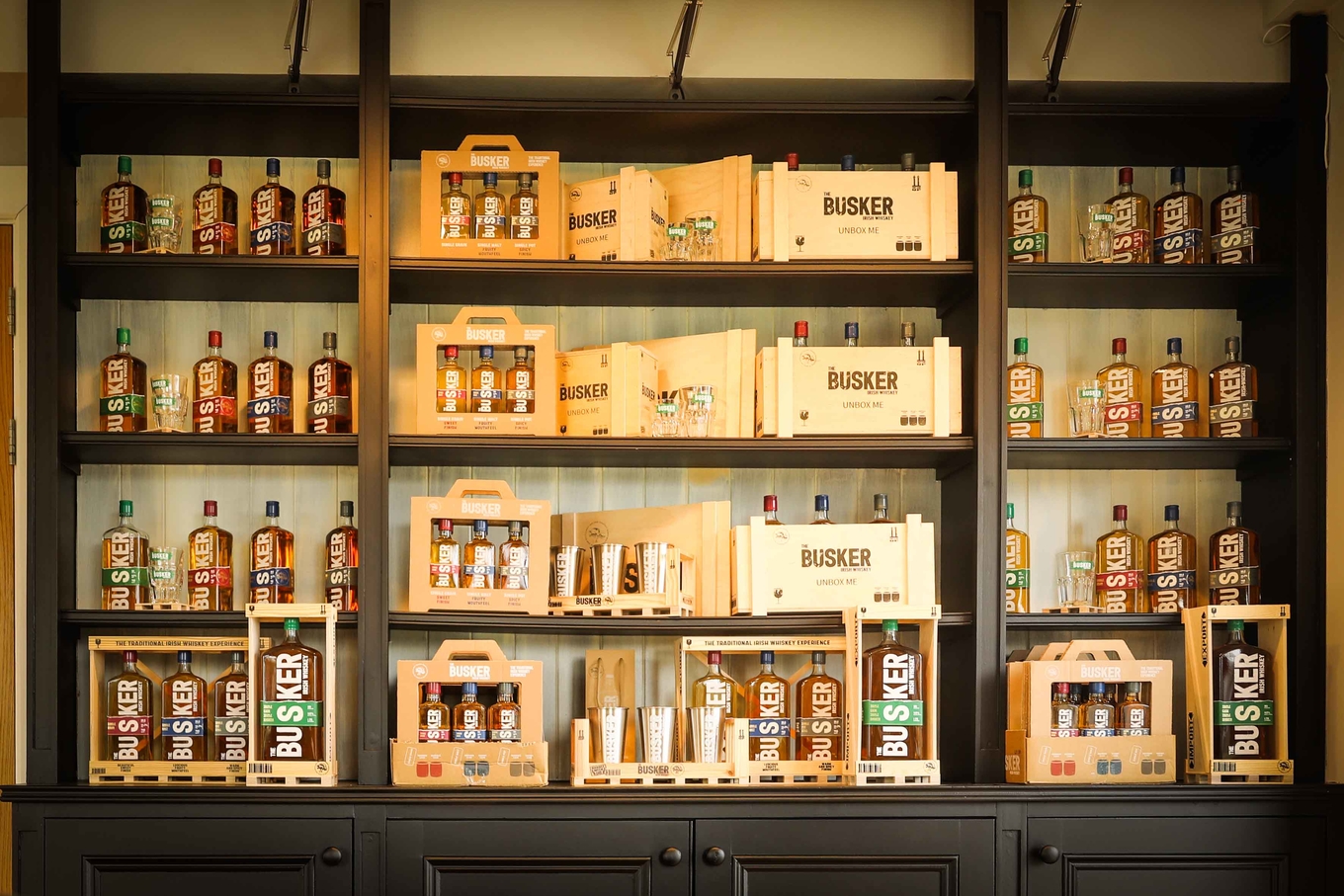 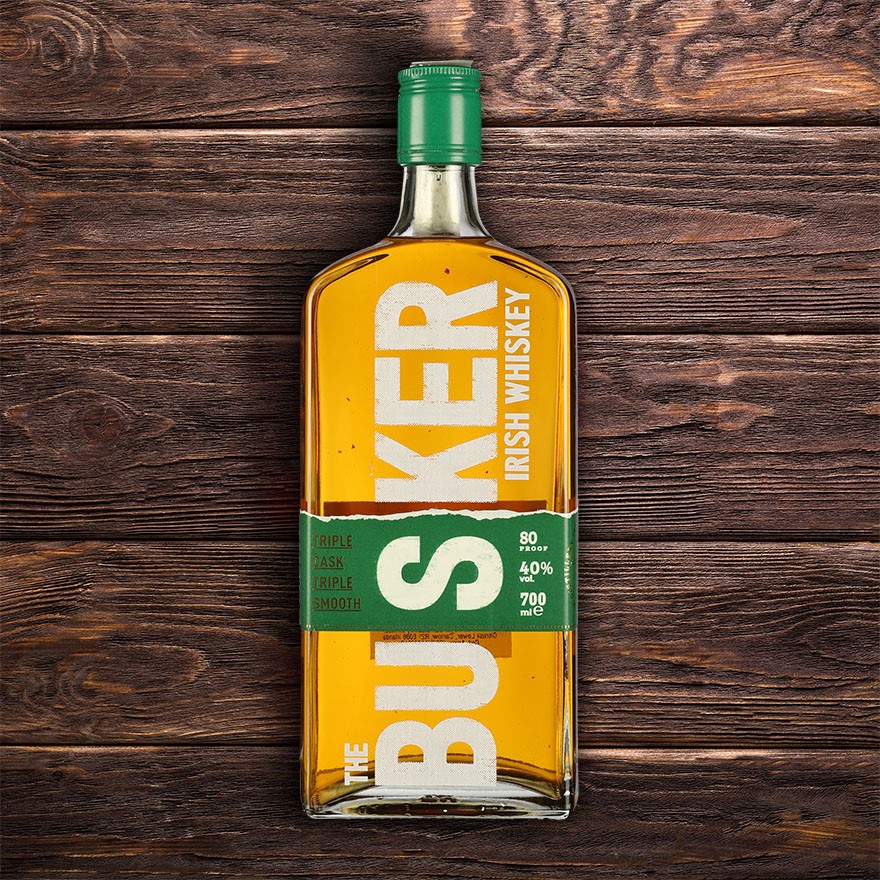 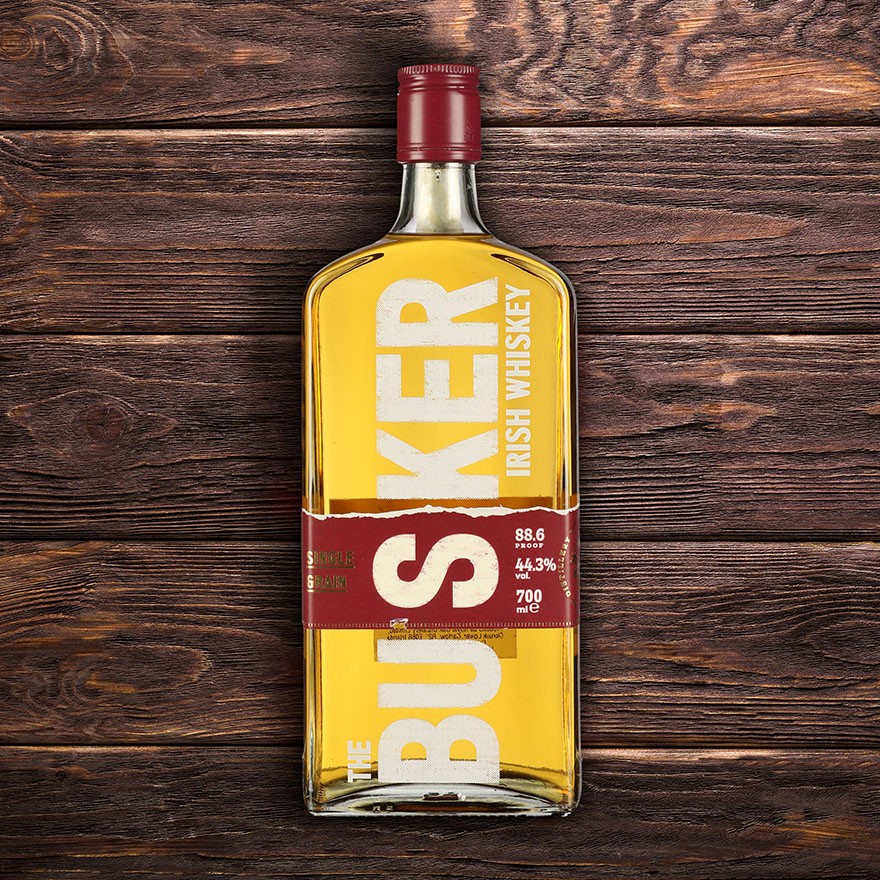 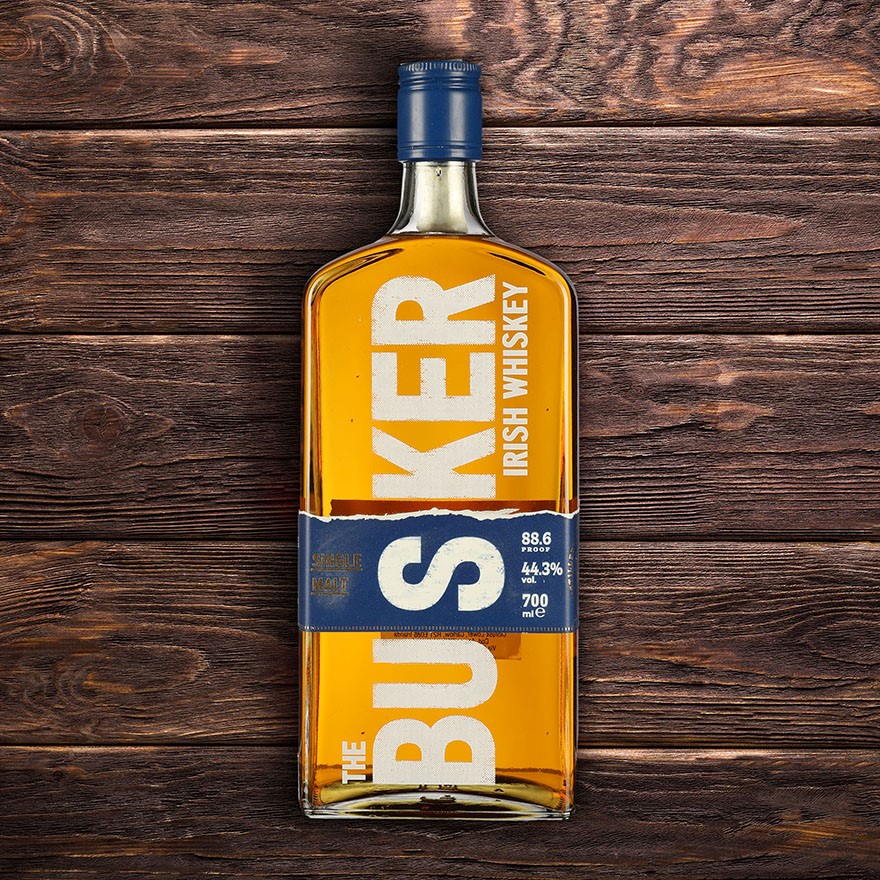 The Busker Single Malt is triple pot distilled and then matured in ex-bourbon casks before a final aging period in sherry wine seasoned casks. 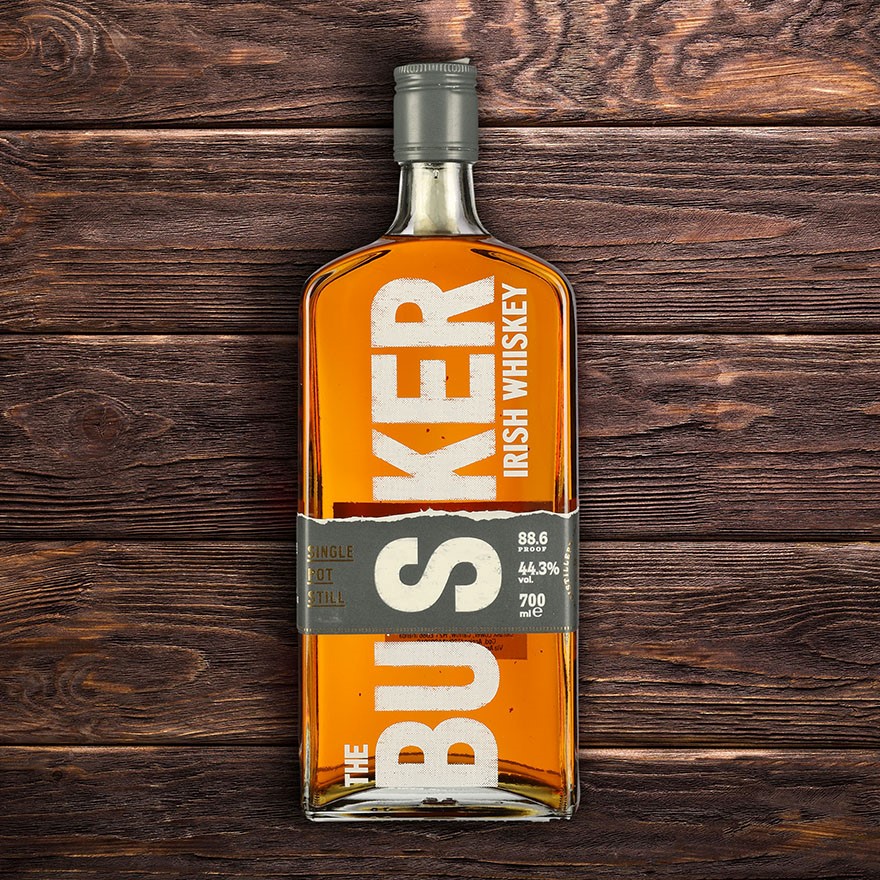