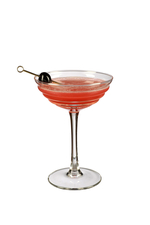 Facundo and his brother, Jose, eventually set up shop in a Santiago de Cuba distillery in 1862, where along with their brother-in-law, Schueg, they established and then quickly expanded their brand. The trio branded Cuba as "the home of rum," and Bacardi as "the king of rums"...and then, during US prohibition, they invited Americans to "come to Cuba and bathe in Bacardi rum." The rest, as they say, is history!

Join us in celebrating this giant of a brand with a Bacardi Cocktail or even a Bacardi Special - a cocktail adapted from Harry Craddock's 1930 The Savoy Cocktail Book.

In 2017, cancer killed around 9.6 million people worldwide and by 2023 this is projected to rise to 13 million. Almost everyone knows someone who has grappled with this killer disease, successfully or otherwise.

Medical advances offer some hope - strangely, a "caterpillar fungus" - a truly bizarre organism that consumes and mummifies a caterpillar then sprouts anew from its remains - is one.

In honour of all those who have lived with cancer, and the caterpillar that might be the clue to a future cure, we are drinking a Butterfly Cocktail. World Cancer Day is also a day to support charities that are working to support those unfortunate enough to have cancer and to develop cures for this frightening disease. Here at Difford's Guide we support Bowel Cancer UK.

This day in 2004, a Harvard student named Mark Zuckerberg started a little site called thefacebook.com, as a way for classmates to keep in touch. Within a month more than half of Harvard's undergraduates were on thefacebook.com; by 2005, Facebook.com had over a million users.

In 2012, the number of active Facebook users surpassed 1 billion, is now around 2.9 billion monthly active users and Mark Zuckerberg is worth squillions.

Is Facebook keeping us connected? Or is it distracting us from the real world, the real people, and the real relationships around us, with its constant clamour for 'likes' and 'shares' and 'comments'? We're not entirely sure whether the ability to fight with strangers on the internet 24/7 is entirely a good thing. But we do love an Angel Face cocktail, a drink we found in Harry Craddock's 1930 The Savoy Cocktail Book, so we're toasting Facebook's birthday with just that. Cheers!