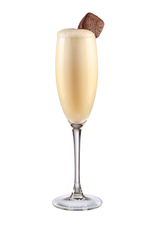 We are rather more partial to orange marmalade on our toast than Nutella in these parts, but as we do like a bit of chocolate in a cocktail from time to time, we are marking the occasion with an adequately adult Ramos Chocolate Fizz.

Burroughs worked with, hung out with and influenced artists from Allen Ginsberg to the Beatles, Andy Warhol to Patti Smith, Lou Reed to J.G. Ballard, and appears as a character in his friend Jack Kerouac's On the Road. Burroughs' life was marred with tragedy. He accidentally shot his wife dead during a booze-fuelled game of target practice in Mexico; their son, Billy Burroughs, also an author, would die of alcoholism aged only 33; one of his last journals before he died relates, miserably, how he failed them all.