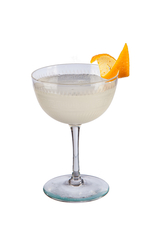 Today has been pronounced "National Cocktail Day" in America, so by extension for the rest of us, it is simply Cocktail Day. It's worth remembering that 13th May is the rather grander sounding World Cocktail Day. So why is today Cocktail Day?

Perhaps Cocktail Day celebrates the day Cocktail, the film with a young flair bartending Tom Cruise, was released. Only that was 29 July 1988. Or, perhaps Cocktail Day celebrates the birthday of "the father of bartending," Jerry Thomas. Only he was born 30 October 1830 and died 15 December 1885. Truth is we don't know, so we'll enjoy a 20th century. Why? It's very tasty and its title seemed an appropriately vague reference to a date. That said, Cocktail Day should be a day to celebrate the likes of Helen David...

In terms of commitment to a venue and a community, Helen David was the sort of bartender they just don't make any more.

Helen was born in the apartment above what would become her bar, in Port Huron, Michigan, on this day in 1915. She worked downstairs, for almost 70 years - from 1937, when she set up the Brass Rail with her mother in the throes of the Great Depression, until just before she died in 2006.

Helen's Tom & Jerrys were legendary, while she trained her cousin, Tony Abou-Ganim, in the art of bartending from a child. Now one of the world's top bartenders, he has commemorated her not only in the Lifetime Achievement Award at Tales of the Cocktail but in the Brass Rail cocktail, named for her bar and in memory of her. If you, like Helen, are a fan of Bénédictine liqueur, we recommend you give this one a go.

It's also the anniversary of Elvis Presley joining the US army

Presley did his basic training at Fort Hood, Texas where he was sworn in, and received his GI haircut, coining the phrase 'hair today, gone tomorrow.'

He was assigned to the 3rd Armoured Division (whose motto was 'Victory or Death') and was deployed to Friedberg, Germany. Presley went on manoeuvre, did the duties of a regular soldier, and even earned medals for marksmanship - no special star treatment then?

Why not mix up a Velvet Elvis to toast the man himself, who managed to be velvety smooth even in the army...within days of him even signing up, his manager received 5,000 letters from adoring fans.

It's the Day of Remembrance for Truth and Justice

Today is a public holiday in Argentina, known as Día de la Memoria por la Verdad y la Justicia, or the Day of Remembrance for Truth and Justice, to commemorate the victims of the Dirty War.

It's the anniversary of the coup d'état of 1976 that toppled a government that was fighting anyone on the left of politics. The Dirty War, or Guerra Sucia, was the name used by the Argentine military government for this period of state terrorism against political dissidents. In those days military and security forces clashed with anyone believed to be associated with socialism.

The end of the Dirty War seems a good reason to celebrate with a holiday or, if you're not in Argentina, a Dirty Martini.

Today is also the anniversary of the Exxon Valdez oil spill

On this day in 1989, the Exxon-Valdez oil tanker was on a routine journey off the Alaskan coast. It left the standard shipping lane to avoid icebergs - then, for some reason, failed to head back into line. It hit a reef, split open and spilled over 40 million litres of oil.

This would become one of the worst environmental disasters of all time. The oil slick spread across the sea; storms blew it further; leaving oil in the formerly pristine Prince William Sound years later.

Exxon would pay $4.5billion damages after the spill, which was, until the Deepwater Horizon blowout, the most damaging oil spill in US history. It killed 250,000 seabirds, around 3,000 sea otters, 300 seals and 20-odd killer whales.

Today oil tankers are safer, and clean-up techniques better - but oil extraction and the uses that we make of it continue to destroy the environment. In the hope of a better future, we're drinking a Corn 'n' Oil, a Caribbean favourite.