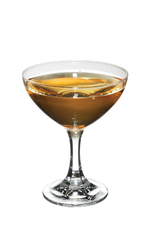 Henry Jeffrey of The Guardian and Master of Malt's blog proposed that kummel be dedicated a day of its own at an event with other drinks hacks, including our own Simon Difford. So it was declared that the 17th April 2019 be International Kummel Day.

The caraway-flavoured liqueur is very much deserving of a revival. Explore the origins and history of kummel and our favourite kummel cocktails.

We're toasting with a Quelle Vie, a cocktail discovered in Harry Craddock's 1930 The Savoy Cocktail Book. Harry says, "Brandy gives you courage and kummel makes you cautious, thus giving you the perfect mixture of bravery and caution, with the bravery predominating."

A bartending banker was born

In Charles H. Baker's splendidly eccentric 1939 cocktail compendium, The Gentleman's Companion: Being an Exotic Drinking Book, he introduces the Alamagoozlum cocktail as "J. Pierpont Morgan's Alamagoozlum: the personal mix credited to that financier, philanthropist & banker of a bygone era."

The said John Pierpont Morgan, one of the greatest businessmen of America's Gilded Age, was born on this day in 1837. Cocktail author David A. Embury unkindly observed that his creation proves that "as a bartender, he was an excellent banker". We beg to differ. The Alamagoozlum defies its myriad ingredients to deliver a glorious bittersweet mélange of flavours, as well as an insight into the well-stocked wonders of a 19th-century oligarch's home bar. Upgrade your own bar and give one a go tonight.

Of all the Spice Girls, still Britain's best-selling girl group, we consider Posh by some distance the least talented. She couldn't sing. She couldn't dance. She always looked, frankly, rather uncomfortable. And yet...

Victoria Beckham, formerly Adams, briefly Adams-Wood, has transformed her career into one half of a global power couple with a net worth estimated at squillions of dollars. She has some 30 million on Instagram, and a fashion line that's popular with both critics and consumers. Sharp, funny and witty, Mrs Beckham hangs out with the global A-list, raises four children, has been apparently happily married to Becks since 1999, and seems to have built a spectacularly fabulous life, supported by bags of ambition and a killer work ethic. Happy birthday, Victoria. We're toasting you with a Spiced Pear and a dram of your husband's whisky.