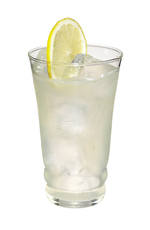 It was on this day back in 1856 that Queen Victoria established the Victoria Cross which is the highest award that a British or commonwealth serviceperson can receive.

It's awarded for "most conspicuous bravery, or some daring or pre-eminent act of valour or self-sacrifice, or extreme devotion to duty in the presence of the enemy." On average less than 10 are awarded each year, though 24 were awarded in a single day at the relief of Lucknow during the Indian Mutiny (1857).

Tonight we're going to mix a Victorian Lemonade, and commemorate Victoria Cross recipients and their heroism. A great reason for a sincere toast.

On this day in 1964, Stanley "The Shining" Kubrick released one of the greatest political satires of all time: Dr. Strangelove; or: How I Learned to Stop Worrying and Love the Bomb. The sorry - and hilarious - tale of a paranoid general unleashing air strikes on Russia, with support from a sinister Nazi scientist played by Peter Sellers, it's still one of the funniest anti-war movies ever.

Not to mention a terrifying model of what could happen if someone with their finger on the nuclear button went absolutely crazy about fluoride in their fluids - or something else, for that matter.

Last re-released on its thirtieth anniversary in 1994, it's not likely to be back in cinemas today, which is a shame. So we're marking the occasion with a Love Me Flip, a richly flavoured contemporary Flip created by Erik Lorincz.

Grumpy faces and sour comebacks at the ready! Today is National Curmudgeon Day, a day worth everything but celebrating. Curmudgeonliness is as British as cricket, whinging, builder's tea and talking about the weather, and if you put the grinch into Christmas this year, then today is for you.

We recommend you celebrate by staying home, not going anywhere, and finding stuff to complain about. If you're of a vintage which allows such things, we recommend also identifying topics that were better in the old days. And, should you have to work tonight, we recommend you channel your inner Norman Balon. We will be sitting in, drinking an aptly named but inappropriately benevolence-inducing Smoky Old Bastard. Cheers!

... comment(s) for The Victoria Cross' birthday